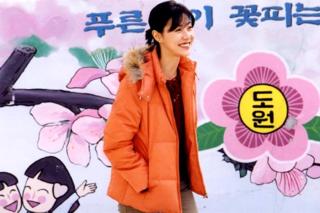 Hong Sang-Soo's film tries to confuse you with a tricksy flashback structure - if you're anything like me, you won't realise the first one actually is a flashback until about ten seconds after it's ended - but its story is simple enough once you get into it. Two old college friends, filmmaker Heonjun (Kim Tae-Woo) and art teacher Munho (Yu Ji-Tae), meet up for a drunken reunion. During their reminiscing, they both start thinking about Heonjun's old flame Sunhwa (Seong Hyeon-Ah) - though initially they try to avoid talking about her. Heonjun didn't treat her particularly well, trying to sneak off to film school in America without telling her, and never contacting her again once he was there. Driven by his memories of their time together, and by industrial quantities of Korean beer, Heonjun persuades Munho to come with him to track down Sunhwa right now and meet her again. Trouble is, Munho hasn't told him about what happened while he was in America...

As has been noted here in the past, South Korean cinema is going from strength to strength, but the only films that get released here tend to be the violent and disturbing ones; witness the current success of Oldboy in the UK, for example. So it's nice to be reminded that the Koreans can make films that don't involve explosions or live octopus ingestion. In fact, there's something distinctly English about the comic tone of the first half or so of the film, where much of the humour comes from what isn't being said rather than what is: the hesitant rhythms of the speech, and even the musical tones of the language, sound curiously familiar to British ears.

Once the men and Sunhwa have met up, the film takes a more downbeat turn, but it all flows naturally from the story. Even the dying fall of the extended epilogue, just focussing on one of the three, initially feels unsatsifying but makes more sense the further you get away from the film. Not quite the 'gem' that Heonjun is told one of his own films is like, but it's a quietly enjoyable piece of work. 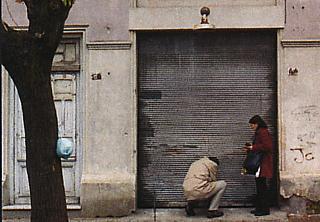 Jacobo (Andres Pazos) is a sock manufacturer. It's not an exciting or glamorous job, but he likes to think he's good at it. The trouble is, he has a brother in Brazil called Herman (Jorge Bolani) who's a much more successful sock manufacturer, and there's obviously some bad blood between the two as a result. Herman is coming to visit Jacobo in Uruguay for a few days for the unveiling of their late mother's headstone, and Jacobo has to do everything he can to persuade Herman how well he's doing - even to the point of persuading his factory supervisor Marta (Mirella Pascual) to pose as his wife.

I spent the latter part of this film worrying that whenever I see deadpan foreign comedies about gloomy people in even gloomier surroundings, I always reach for the work of Aki Kaurismaki as a comparison. Happily, directors Juan Pablo Rebella and Pablo Stoll namecheck Finland's finest in their closing credits, so they've already done the work for me. In fact, it's not quite a perfect comparison, as Kaurismaki's characters tend to be driven by a deep philosophical sadness and dissatisfaction with the world around them. The trio at the centre of Whisky are more borderline autistic than anything else, wanting to engage with each other and the rest of the world but just not being very good at it.

None of which gives any real indication as to how funny the film is. For the first fifteen minutes or so, as we're shown the repetitive grind of Jacobo and Marta's daily routine, you may feel there's an upper limit to the amount of detail you need to be told about the sock manufacturing process. But in fact the directors are cunningly setting all this up to emphasise how much disruption the arrival of Herman will cause, and the repetition has paid off beautifully by the end. And the film is crammed with jokes - from tiny comic details like the sticker from one of Jacobo's socks that ends up on his kitchen radio, to the quietly understated ways in which the brothers try to outdo each other at every opportunity. By the end, Whisky has transcended those Kaurismaki comparisons to become entirely its own film. And in case you were wondering, apparently the title's Spanish for 'cheese'.