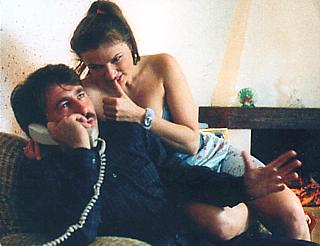 The 1997 London Film Festival - the last one I attended before I took it upon myself to document every film I saw on a daily basis - was notable for being the festival at which I saw Western, a delightfully rambling French road movie. It introduced me to two big names I wasn't previously aware of: director Manuel Poirier, and actor Sergi Lopez. Lopez has gone on from there to become the hardest working man in European cinema, and these days he fills the same role in film festivals that Gerard Depardieu filled ten years ago: a solid, reliable presence, who'll always be found in a couple of films on the festival circuit, year in, year out. Poirier's career, on the other hand, hasn't had anything like the same degree of success, though it's nice to see that Poirier and Lopez still work together on films like this one.

Here, Lopez plays Victor, a small-time dodgy dealer: it isn't too much of a stretch to think of his adventures as being like a French arthouse version of Only Fools And Horses. He's continually running from one town to the next, with his teenage son Felix (Kevin Miranda) always in the back seat asking where they're going now. Victor takes on all manner of scams - selling on furniture from rented accommodation, operating an illegal international call centre, acting as an agent for a Piaf impersonator - all with varying degrees of lack of success. Meanwhile, Felix is skipping school regularly as he tries to decide whether this is really the life for him.

This isn't really much more than a ho-hum family drama, sadly. Lopez is as great as ever - he's trying to be different things to different people all at the same time, and his carefully layered performance carefully reveals the cracks in his facade at just the right time. But the story is just too slow moving and episodic to engage our interest, though admittedly it does have its moments here and there. Poirier still doesn't seem to be able to deliver on the promise of Western, which is a bit of a shame. 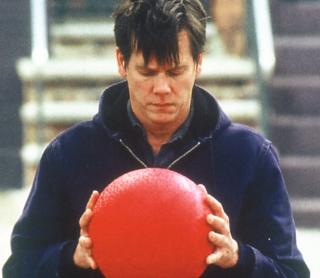 Walter (Kevin Bacon) is a quiet man who's just moved into the neighbourhood, and started work at the local woodyard. He doesn't make new friends easily, but slowly starts up a relationship with the one woman at the woodyard, Vickie (Kyra Sedgwick). Nobody knows anything about Walter's past, and he wants to keep it that way. Because Walter has just done a twelve year stretch in jail for two counts of sexual assault on minors. Nevertheless, some secrets are too big to keep hidden.

Can you imagine what a British version of this story would be like? They'd have the lynch mobs mobilised before you got to the end of the first reel. What impresses most about Nicole Kassell's film (adapted from a play by Steven Fechter) is the unsensational approach to what could so easily be sensational material. It's handled with tremendous restraint, and yet isn't afraid to cross lines when they need to be crossed. There are some excellent supporting performances - Kyra Sedgwick does white trash to perfection, while Mos Def takes his three scenes as the cop keeping an eye on Walter and turns them into a masterclass on subtext. And Kassell does a fine job of depicting the torment in Walter's head through the photography and editing, particularly in a beautifully fragmented love scene.

But it's unquestionably Bacon's picture. After years of seeing him play The Kid in films, and then having to get used to him being The Guy, what he pulls off here is a strange mixture of the two. He's recognisably an older man, but his face is a childlike mask of confusion and terror as he spends his day trying to avoid opportunities for temptation - crucially, the only time he seems relaxed is when he's talking to children. Bacon talked yesterday about how his key contribution to the production was cutting out most of his dialogue. Normally, that sounds like the sort of toss uttered by actors who want to pretend they're talented enough to not need writers: but a fantastically internalised performance like this needs no excuses. His stripped-down approach pays off in a nail-bitingly brilliant climactic scene: it's just two people talking, but it plays maliciously with your expectations and hopes, and genuinely leaves you fearful as to its outcome. This is a fabulous piece of work that should be seen - don't let the theme put you off. 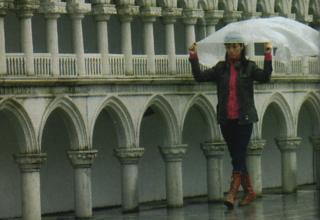 In World Park, according to the adverts, you can see the whole world without ever leaving Beijing. It's a monstrously tacky theme park featuring one-third scale replicas of all the world's monuments, for you to have your picture taken next to. Nowhere else on the planet can you see the New York skyline just yards away from Tower Bridge. In some cases, it's even better than real life: as one visitor proudly boasts, "the Twin Towers in New York were blown up on September 11th, but ours are still here!" Jai Zhangke's film tells the stories of some of the people who work there, notably the on-off romance of dancer Tao (Zhao Tao) and security guard Taisheng (Chen Tai-Sheng).

It's a curious mixture: social realism, played out against an outrageous fantasy backdrop. For me, the mix doesn't really work. You can appreciate how the film sets up the contrast between the OTT splendour of World Park and the grubby squalor of the living conditions of its staff, but you can't really engage with it. The actual stories being told here are little more than soap opera narratives, and the scenery simply overwhelms them. It's particularly confusing for a Western viewer like myself, who spent the whole film wondering whether World Park was a triumph of set construction or brilliantly programmed CGI, only to discover at the end that it's a real live theme park.

That's not to say that The World is a total failure. It has a very distinctive look, stylishly shot in hi-def Scope with some appealing animated interludes (used on the half dozen or so occasions when a text message pushes the plot forward). And there are some lovely jokes at the expense of the tourists who pass through the park - an understated running gag set around the replica of the Leaning Tower of Pisa is particularly cherishable. But for all its visual delights, it's very hard to connect with whatever's under its shiny surface.

Maria Sharapova Fanclub - So to my final film at this year's London Film Festival, which is Woody Allen's latest Melinda and Melinda. Now as all of you know, Woody Allen is undoubtedly my favourite director of all time (excuse me, you mean some of you didn't know that). Anyway, that is not to say that his output is not patchy. It has always been the case with Allen that you will get a ratio of one masterpiece to one good movie to one duff one. What has always been a major irritant for me, is that the people who don't really get Allen praise his duff movies like, say: Zelig, Everyone Says I Love You, Annie Hall, Mighty Aphrodite etc. etc, whilst slating or ignoring all his great work. Therefore when I read in three separate places that his movie was a return to form from Allen (in fact make that four with Ms Hebron's introduction), I should have known what was coming. Yes you guessed it, this is one of Allen's duff movies.

So what we have (using the same framing device as Broadway Danny Rose) is the tale of one woman called Melinda in two different scenarios. One being loosely comedy, one loosely tragedy (as such neither quite getting there, and more in line with Allen's standard dramedy approach). Thus events in both takes follow a reasonably similar pattern within Allen's sophisticated arty Manhattan set. The problem, however, is that we have seen these complicated/humorous relationship scenarios played out by Allen so many times before. The difference is, they have either been funnier or had more of an edge.

Thus this is Allen (who doesn't appear by the way) for people who don't like Allen, and as I said previously one of his duff movies. Going back to my ratios theory, his previous movie Anything Else was actually fairly entertaining, and his movie before that Curse Of The Jade Scorpion, whilst not quite a masterpiece, was an excellent piece of work that only Allen would be capable of making. Needless to say both of them were slated by the critics.

So anyway Melinda and Melinda is one to be forgotten, but that only means that the next one will be one to watch out for.