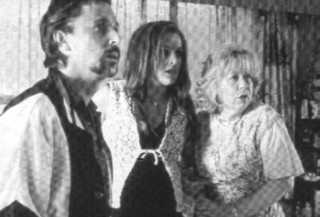 My friend Lee insists that the main difference between New Zealand and a tub of yoghurt is that yoghurt generally has some sort of live culture. She's biased, of course: she lives there. But it's nice to track down the occasional bit of Kiwi art just to prove her wrong, and Via Satellite should do the job quite nicely.

Carol Dunn (Danielle Cormack) has got through to the swimming finals at the Olympic Games. A TV station has the bright idea of setting up a camera in her family's home in New Zealand, so that they can have a big emotional family reunion via satellite immediately after her race. If they'd gone to the trouble of finding out about the family in advance, they may not have bothered. Mum (Donna Akersten) is getting more and more dotty by the day: her sister Jen (Rima Te Wiata) is failing to have a baby no matter how hard hubby Ken (Tim Balme) tries: and her other sister Lyn (Jodie Dorday) is eight months pregnant but won't say who the father is. And that's not to mention Carol's twin sister Chrissy (Danielle Cormack again), who's become estranged from the family since a deathbed revelation from her father a couple of years ago. Surely the pressure of appearing on national television couldn't make the family relationships any worse? Go on, guess.

Comedy films from Australia and New Zealand tend to fit to a standard template these days, and Via Satellite follows it quite closely: it starts with kitsch humour as we watch the Dunns desperately try to put on airs for the visiting TV crew, and then veers between pathos and dark comedy as skeletons hurtle out of closets at roughly fifteen-minute intervals. Writer/director Anthony McCarten has adapted his own stage play for this film, and although the small cast and limited locations may be a clue to its original theatrical origins, the real giveaway is the way the dramatic plot twists are carefully spaced throughout the film at precisely the points where a theatre audience would be starting to doze off and need something to keep their interest. That said, the funny and sad bits complement each other quite nicely, and the cast are terrific: particularly Danielle Cormack, whose dual role means that her big scene involves acting to an image of herself on a TV screen, a challenge she pulls off brilliantly. Harry Ross (Paul Newman), former cop turned private eye, takes on a job for film stars Jack and Catherine Ames (Gene Hackman and Susan Sarandon), bringing their daughter back from an elopement in Mexico. In the process he ends up being shot in the leg (although rumours in his old copshop escalate this to a much more embarrassing shooting). Jack and Catherine feel sorry for Harry, and take him on as a combination odd-job man and friend to the family. One of his odd jobs turns nasty when he delivers a package for Jack, only to find himself at the scene of a murder. Under suspicion for the crime, Harry calls in favours from his old colleagues on the force (Stockard Channing and James Garner) and his PI agency (Giancarlo Esposito) to try to find out what's going on. What he uncovers is a web of blackmail, corruption and murder.

It's impossible to write about Twilight without using the words "old" and "fashioned". This isn't necessarily a bad thing. It's a mystery thriller of the old school, driven by character rather than violent incident. There aren't very many real thrills, and the solution to the mystery is a bit so-whattish when you actually get to it, but in a film like this it's the journey to the solution that's the important thing. The script by Richard Russo and director Robert Benton twists and turns in all the right places, and everyone gets a handful of dry comic lines to play with, up to and including the minor female character who describes herself to Harry as "mucho hair, mucho tits".

And you can read the cast in that first paragraph, can't you? You know how good they'd be, and you'd be right. Twilight allows you to spend 95 minutes in the company of a solid bunch of reliable actors who know exactly what they're doing. Trust them. 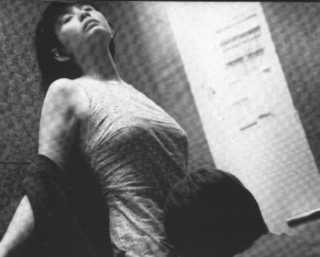 Sad to say, the Hong Kong section of the LFF programme is looking pretty thin this year. After the mounting popularity of HK cinema in the UK over the last few years, are there really only three films from the country deemed worthy of a place in the Festival? Two of those are co-productions with the US (Journey To Beijing) and China (Xiao Wu), so the one film solely from Hong Kong this year is Hold You Tight.

Director Stanley Kwan has had an interesting career. Generally known for making love stories which didn't fit the standard HK cliches of guns, kung fu and violent death (Rouge is the best known over here), the turning point was a couple of years ago when he made the Hong Kong entry in the BFI's Century Of Cinema season of documentaries celebrating 100 years of cinema around the world. His film Yang +/- Yin: Gender In Chinese Cinema looked at the sexual subtexts in Chinese and Hong Kong movies, such as those homoerotic undercurrents that have always been present in John Woo's films (although Woo himself claims he doesn't know anything about that). One of the repercussions of this film was that Kwan finally came out over his own homosexuality.

Hold You Tight is the first film he's made since then, so it's no surprise that at heart it's a gay love story. Fung Wai (Sunny Chan) has lost his wife Ah Moon (Chingamy Yau) in a plane crash: the film flashes backwards to the short time they spent together, and forwards to Fung's attempts to pick up the pieces of his life helped by two men, estate agent Tong (Eric Tsang) and swimming pool attendant Jie (Ko Yue-Lin). What Fung doesn't realise is that Jie has been obsessed with him ever since seeing him swim in his pool, although the closest Jie got to consummating this desire was having an affair with Ah Moon before she died. And just to confuse matters even further, there's a second woman who just misses the fatal plane crash thanks to her maid accidentally leaving her passport on a taxi, and she looks exactly like Ah Moon...

Hold You Tight's a curious little film and no mistake. I suspect a fair proportion of the audience on the night were there specifically for Chingamy Yau: she's best known among the HK fanboy community in this country for her appearance in legendary sleazefest Naked Killer, where she manages to say lines like "Bitch! I will break your tits!" without bursting into hysterical laughter. So it's a bit of a surprise to find that the film's more about Fung Wai's relationship with men than his relationship with her. It takes a little bit too much time working through to a fairly inconclusive ending, but the acting is fine and it's nice for once to see Chingamy Yau in a straight role. Or two. (You could come up with all sorts of intellectual and symbolic reasons why the "lookalike" character is in the film, but any excuse to have Chingamy Yau in a film for ten minutes longer is fine by me.) Anyone who's ever attended a screening of an Asian film at the LFF in previous years has the added bonus of seeing the familiar figure of Tony Rayns, film critic and the British Film Institute's resident Asian film guru, trying to pick up a bloke in a gay bar in two languages.

Brits In The Spotlight Programme 1

Rob D - A selection of shorts. Reactions to each bit of Brits... as follows:

And so it went on, and on, and on. Basically I sat through nearly two hours of not very good films just to see Vacuum. This may be the last selection of shorts that I go to see.

Ken - Perhaps it's the age of the cast - including Paul Newman, Gene Hackman, Susan Sarandon and James Garner - but this film has a very old-fashioned feel to it. The gumshoe hero could just as easily have been played by Humphrey Bogart. Nevertheless it holds the audience's attention throughout, and there are comic moments like the rumour in the police station that the PI's gunshot wound has Bobbitted him. On second thoughts, maybe Bogart wouldn't have played the part... Entertaining.

Ken - Low budget New Zealand comic soap about a young woman dragooned into a TV linkup with her twin sister, who is away competing at the Olympics. The family squabbles continually as various secrets are uncovered. Recommended.