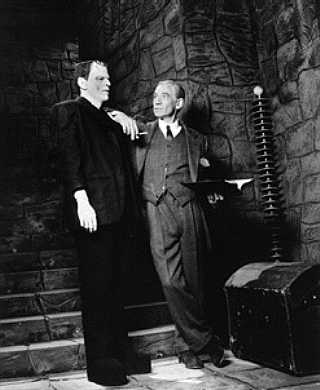 It's bizarre to think that the last time I saw Brendan Fraser in a movie, he was attacking innocent trees with his face in George Of The Jungle. And here he is now as the object of an ageing film director's homosexual lust. It's a living, I suppose.

Gods And Monsters takes a educated guess at the events leading up to the death of James Whale, the director best known for the Frankenstein movies of the early thirties. When we first meet him, Whale (Ian McKellen) has effectively dropped out of film-making all together, as a result of rumours about his sexuality and a stroke he suffered recently. One of the effects of the stroke is what he likes to think of as "an electrical storm in the brain": at moments of high anxiety, memories of his past come flooding back to him at unbearable speed. Into this environment comes Whale's new gardener, Clay Boone (Brendan Fraser). Under the pretext of sketching Boone's portrait, Whale tells him tales of his life and tentatively tries to develop a friendship that he hopes will develop into something more, despite the obvious complication that Boone is undeniably straight.

The ultra-rapid flashbacks used to convey Whale's mental turmoil are all visually impressive, but they're so fragmented that it's very difficult to get any real sense of his past life. A little too much time is spent talking about his history, and not enough showing it. The only time the flashbacks slow down are during recreations of the filming of Bride Of Frankenstein, and to a lesser extent his memories of the trenches in the Great War, where he lost the love of his life. But McKellen's performance as Whale in his dotage is very fine indeed, cheekily showing signs of the director's old vigour beneath his frail exterior. And under Fraser's initial macho bluster, we eventually see some of the innocence that made his performance as George Of The Jungle so charming. Although it's a little spooky to discover that when he appears as Frankenstein's monster in a dream sequence, they didn't have to alter the shape of his head at all.

Adapted by writer/director Bill Condon from Christopher Bram's novel Father Of Frankenstein, Gods And Monsters is certainly a touching story of unrequited love developing into friendship, but it's also incredibly funny in parts. There are some lovely supporting performances, including Cornelia Hayes O'Herlihy as a completely air-headed Princess Margaret, and Lynn Redgrave as Whale's dotty housekeeper - "I don't know polite English word! He is bugger!" The final scene where Fraser watches Frankenstein's monster on TV saying "Alone... bad! Friend... good!" shows a serious underestimation of the audience's ability to work out the point of a film for themselves, but other than that it's a very enjoyable piece of work. 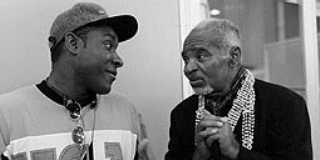 "Ah, Belgium. What a fascinating country." Now that's not a point of view you hear every day. It's certainly not one shared by my chum Smudge The Cat, who was meant to be helping me out with the reviews today, but ended up confined to her Hairy Sofa with a runny bottom. It's a shame you missed this movie, Smudge, you'd have loved it.

The unlikely Belgophile is King Mani Kongo (Gérard Essomba), ruler of a small village in the Congo. He visited Belgium back in 1958 on a diplomatic visit, and loved it so much that he sent his daughter Mwana (Dominique Mesa) over there to study medicine. He hasn't heard a word from her for several years, so he travels to Brussels to track her down.

What he doesn't realise is that Mwana has fallen on hard times: she's only just got out of jail after having been suckered into smuggling drugs, and is currently working as a dancer in a nightclub, a job obtained for her by Jefke (Herbert Flack), the police chief of the African quarter. Her developing love affair with taxi driver Chaka-Jo (Jean-Louis Daulne) is the only bright spot in her life right now.

It's best to think of Pieces Of Identity as a fable rather than serious drama, particularly given the huge number of outrageous coincidences that drive the plot forward, in the style of Armistead Maupin's Tales Of The City. Thus the first person Mani Kongo meets in Brussels is Chaka-Jo, and the police chief turns out to have previously been a colonial administrator for Mani's kingdom. After a while you just assume that everyone in the film is connected to everyone else, and happily await the revelations as they come.

Given the setting within the African quarter of Brussels, the issue of black/white racism doesn't explicitly arise within Pieces Of Identity. But within this charming and unassuming story there are some serious reflections on questions of race, upbringing and identity - at one stage Mani has to pawn his regal headdress and fetishes for money for his search, and reflects how these are the only things that give him a distinct identity in this country. A very good movie from writer/director Mwézé Ngangura, with the added bonus of a number from African music legend Papa Wemba. 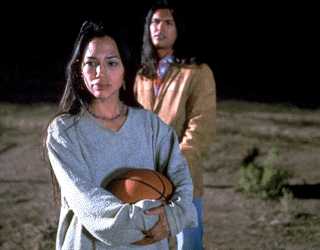 Smoke Signals comes trailed as the first movie written and directed by Native Americans, and the screening seemed initially to be full of very earnest types wanting to celebrate the dignity of indigenous tribes. This impression was reinforced by the catalogue of Native American goods being handed out on the way into the cinema, offering the chance to buy traditional Native American jewellery, blankets and... personal organisers?

Happily, the movie itself is a lot less earnest and much more entertaining. Director Chris Eyre stated at the Q&A that he wants to avoid the cliches of noble men in loincloths that tend to blight depictions of his race in films, and just make universal stories set in the present day. Smoke Signals is certainly a fine example of that approach.

The film tells the story of two friends, Victor Joseph (Adam Beach) and Thomas Builds-The-Fire (Evan Adams), living on an Indian reservation in Idaho. Their fates have been tied together ever since Victor's father Arnold (Gary Farmer) rescued the infant Thomas from a house fire that left him an orphan. An abusive alcoholic, Arnold deserted his wife and son some years later, and only now has word got out that he's been found dead in a trailer in Phoenix. Victor and Joseph go off on a road journey to collect his ashes from Arnold's former neighbour Suzy Song (Irene Bedard).

Thomas and Victor have an extraordinary love-hate relationship, which is put to the test by their journey. Victor is obsessed with flaunting his Indian heritage, and tries to teach Thomas about what makes an Indian ("Don't smile, be stoic, look like you've just killed a buffalo." "But our tribe catches salmon..."). The dreamier Thomas is a compulsive story-teller, spinning tales of their childhoods to anyone who'll listen, whether they are true or not. By the end of the journey a lot of truths about their past will have finally been uncovered.

Adapted by Sherman Alexie from his splendidly-titled collection of short stories, The Lone Ranger And Tonto Fistfight In Heaven, Smoke Signals is a terrific piece of entertainment that (to quote the director again) manages to have a political edge simply because of the mere presence of so many Native Americans in a single film. It celebrates the great oral tradition of stories being passed between generations, it has a fine musical score by B.C. Smith, and the climactic scene of Victor disposing of his father's ashes (while Thomas recites a poem on the need to forgive our fathers) is an extraordinarily powerful moment. Make a note of this one in your Indigenous Personal Organiser (£49.95).

Is John Waters going soft in his old age? Rob D's promised to ask him in his Guardian Interview tonight, so I'll let you know the result. But without a doubt, Pecker is a far cry from the days of Divine eating dogshit on camera in Pink Flamingos: aside from a gratuitous beaver shot, and the director's credit appearing over a scene of two rats having sex, it's a comparatively tame movie. Having said that, it's still very funny, and despite recent bids for his crown from the Farrelly brothers, John Waters is pretty much the only person who could have made this film.

Pecker (Edward Furlong) is seen at the start of the film taking pictures of his native Baltimore. He'll photograph anything and everything: his girlfriend Shelley (Christina Ricci) trying to stop people indulging in frottage with the washing machines in her launderette: his friend Matt (Brendan Sexton III) shoplifting from the local stores and planting liver in vegetarians' shopping baskets: his grandmother's talking statue of the Virgin Mary. ("Full of grace! Full of grace!")

He exhibits the pictures in the diner where he works, where they're spotted by New York art dealer Rorey (Lili Taylor), who offers to exhibit them in her gallery. Pecker and his family are feted and patronised by the poseurs of the NY art scene, but it's not until they return back to Baltimore that Pecker starts to find out just how much his new-found fame has cost him, and the steps he has to take to get his old life back.

As with most Waters movies, the plot isn't really up to much, and falls apart completely in the last fifteen minutes of so, disintegrating into an over-extended party scene. But it's the characters and jokes that are the important thing, and Waters keeps them coming at high speed. A particular favourite of mine is Pecker's little sister Chrissy (Lauren Hulsey), who spends the entire picture battling against her sugar addiction, until the final scene where she's seen snorting... no, I won't spoil it for you. And as Waters pointed out afterwards, the main achievement of the movie has to be the promotion of the sexual act known as "teabagging" into the mainstream. "It's perfectly safe, and you can't get pregnant from it." If the idea of a gay disco anthem titled Don't Drop The Soap (For Anyone Else But Me) appeals to you, then this is your kind of movie.

Ken - Beautifully photographed among the electricity pylons and crags of the Peak District, and gas storage tanks and cooling towers of Sheffield, this is the story of a crew (including Pete Postlethwaite) painting the pylons, plus an Australian hitch-hiker (Rachel Griffiths) as the obligatory love interest. Written by Full Monty scripter Simon Beaufoy, the Sheffield locations draw obvious comparisons: but unfortunately this script doesn't make the grade, and although an enjoyable enough film, it's really only the locations that make it work.