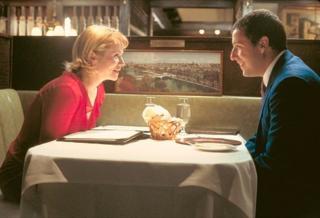 Adam Sandler Fans Disappointed By Intelligent, Nuanced Performance. LOS ANGELES—Adam Sandler fans across the nation expressed deep disappointment in the new film Punch-Drunk Love, which features an intelligent, nuanced lead performance by the comedian. "He didn't even do his funny high-pitched 'retardo guy' voice," said college student Bradley Sanderson, 19, after seeing the critically lauded film Tuesday. "And what was with all that textured, multi-dimensional character-development shit?" Similarly let down was fan Bob Trotta: "I didn't pay $9 to see Adam Sandler wrestle with some psychological crisis. He could have at least put a trash-can lid on his head and gone, 'I'm Crazy Trash Head! Gimme some candy!' How hard would that have been?" (from The Onion, 30/10/2002)

A surprisingly full Odeon West End 2, considering it's one o'clock on a Monday afternoon: presumably it's full of the sort of unemployable wastrels who are the core audience for any Adam Sandler movie. Sandler plays Barry Egan, a man with a dead-end job, a coven of annoying sisters trying to get him married off, and serious anger management issues. When he's introduced to Lena (Emily Watson), he thinks that his luck is finally changing. But he's wrong: a casual call he once made to a phone sex line is coming back to haunt him with a vengeance, in the form of psychopathic mattress salesman Dean Trumbell (Philip Seymour Hoffman) and his team of goons.

Of course, the reason why the LFF is showing an Adam Sandler movie in the first place is because this one's written and directed by Paul Thomas Anderson, of Magnolia and Boogie Nights fame. And the standard critical line on Punch Drunk Love has been the one implied by the Onion piece quoted above: that we're going to see the goofball comic broaden his range by working with a serious, Oscar-nominated director. But we don't. Because the serious, Oscar-nominated director has given him another Adam Sandler Movie to perform in. Sure, it's more technically adept and a little better written than Big Daddy or Little Nicky, but it's just as tied to the required formula as they are: we get a few laughs from a borderline autistic lead character, as he causes havoc to all around him but still triumphs at the end. And it's still only a little better written than Sandler's earlier films. In particular, there's an epic subplot involving Barry's search for air miles which peters out alarmingly halfway through, and seems to only be there to justify an admittedly lovely shot of him running down a supermarket aisle carrying a display case full of chocolate pudding.

It's not a wholly irredeemable mess. Anderson directs with his usual overload of detail: fast camera movement, busy/loud soundtrack, overlapping dialogue, the sort of frenzied mix of styles you either love or hate (and I'm in the former camp). The supporting performances are all great, particularly a rare opportunity to see Philip Seymour Hoffman go nuts. And this may well be the first Sandler movie to acknowledge the dark side of those 'comedy' fits of rage that are his trademark. But he's still just playing the same character as he always does, and if you didn't like it before, you're not going to like it now. Most disturbing of all, the usually magnificent Emily Watson barely registers at all: her role is such an underwritten void, by the end of the movie you'll be hard pushed to recall anything she contributed apart from the final line. Magnolia is one of my favourite movies of this millennium to date, but Punch Drunk Love simply isn't good enough as a follow-up. 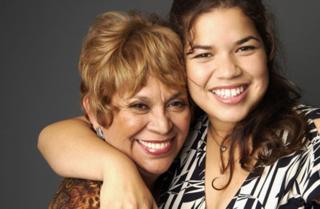 Ana (America Ferrera) is a Latina teenager living in East LA. She's just finished school, and has ambitions to go on to college. But her demonically possessive mother Carmen (Lupe Ontiveros) has other plans. Carmen has had to work for her living since she was thirteen, and she doesn't see why things should be any different for Ana, who could probably get herself a nice man to keep her if she could just lose a few pounds. So Carmen uses all manner of emotional blackmail techniques to keep her daughter tied to the family, working in a sweatshop for her other daughter Estela (Ingrid Oliu). During her long hot summer in this job, Ana is forced to take stock of who she is and where she's going. After That Summer, Things Will Never Be The Same Again.

The stock ATSTWNBTSA phrase heralds yet another coming-of-age movie, of course. But a good one. Made for HBO, Patricia Cardoso's film shows little signs of its origins as a stage play (written by Josefina Lopez). The writing and performances are beautifully judged: the family conflicts never topple over into melodramatic excess, and there isn't a big rush at the end to tie up everything into a nice happy little resolution. A bit like real life, really. The only slightly queasy moment is a speech towards the end that nearly turns the film into a Movie Of The Week about positive body image. Thankfully, the speech is immediately followed by a glorious visual sequence that gets all its points over in a much more enjoyable fashion. My main complaint so far about this LFF has been the lack of small films that apparently come out of nowhere and surprise you. Well, here's one. 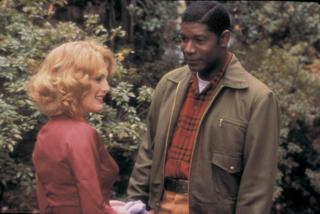 It's all the internet's fault, you know. In the old days, the Surprise Film was a highlight of the festival because it really could surprise you: even when the title appeared on screen, you still may not have any idea what you were in for, and in an age of over-hyped movies that's an increasingly rare experience. Now, as soon as a film's released in the US we know pretty much everything about it by the end of its opening weekend. Web access to American release schedules means that you can have a good advance guess at the candidates for the surprise slot. The Belated Birthday Girl was suggesting The Ring, while I was holding out for Jackass: The Movie: but there were a number of big American films on our shortlist, and this was one of them. And thanks to the wide availability of information on movies these days, once the title's appeared on the screen, that's the surprise part over: I knew as much about Far From Heaven going into this screening as I did about any of the films in this year's official programme. (Interesting to note the audience reaction: a few 'oohs' and 'aahs' when the cast names came up, but the biggest cheer was for the credit for director Todd Haynes, and there was no response at all to the title card which came after that. By that point, everyone already knew exactly what was coming.)

Todd Haynes' film is a pastiche, homage, whatever, of the lurid melodramas made by Douglas Sirk in the 1950s. Cathy Whitaker (Julianne Moore) and her husband Frank (Dennis Quaid) are the perfect fifties couple: he's got a swell job, she has a swanky social circle, they've got two lovely children and a couple of Negro servants. But their relationship is torn apart when Frank's unusual nocturnal practices come to light. In despair, Cathy seeks comfort from her gardener, Raymond Deagan (Dennis Haysbert): but if Cathy's looking to avoid gossip, then being seen in public with a black man is probably the wrong way to go about it.

Technically, Far From Heaven is magnificent. The cast perform it perfectly in the style of the period: the dialogue manages to be overwrought and constrained all at the same time, and saying these lines naturalistically would kill them stone dead. The look and sound of the film is immaculate, with Edward Lachman's colour-rich photography and Elmer Bernstein's achingly beautiful score the obvious highlights. And although it's by no means attempting to put a contemporary spin on the issues that Sirk could only hint at back in the fifties, it certainly depicts them with a lot more frankness, while still getting across the fear that race and sexuality could generate back then. (This feels like the most taboo-breaking film Haynes has ever made, and it's still only a 12A.)

Haynes is obviously shooting for the same level of high emotion that Sirk injected into his overblown tales. But in the end Far From Heaven is just a little too knowing to pull it off: all too often the film feels too much like a classy pastiche to actually have any genuine feeling. How much of that is actually true, and how much of it is down to the baggage that a director like Haynes brings to the project, is difficult to say. Certainly it's not a problem that affects the whole movie, and there are definite moments towards the end when the emotional intensity is high enough to break through the distancing levels of irony. Just not quite enough of them to make this a truly great movie: but enough to make it very good indeed. Beats the shit out of last year's Hearts In Atlantis, anyway.