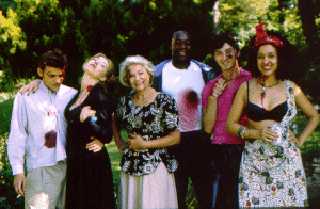 Papa pulls out a gun and shoots his entire family dead.

Now that's what I call an opening.

There are certain types of film that the French do better than anyone else (although as will be seen later on today, we're catching up). Setting up a comfortable middle class situation and then satirically destroying it is one of their great traditions, and François Ozon's first feature film follows that tradition in fine style. Hélène and Jean are happy in their home with their two lovely children, until the day that Jean brings home a pet rat for the family to play with. The kids love it, but Hélène is deeply disturbed by its presence in her house. With good reason, as it turns out.

As the rat makes its way round the household, it seems to infect each of the family members in turn. Within a few weeks the daughter is a paraplegic sadomasochist, the son has turned homosexual and is organising games for his friends that involve the use of a large number of courgettes, and Hélène reluctantly ends up having sex with her son to try and turn him straight again. Even their maid gets involved in the mounting depravity: at one stage she's seen in a surprisingly explicit depiction of the act referred to in the Viz Profanisaurus as a sausage sandwich (the sort that requires two baps in its construction rather than one). As for Jean, he seems to be quietly taking all this in his stride. But it's always the quiet ones who are the worst.

As I said, no other nation on earth could get away with all this and still make it funny, with the possible exception of America when it allows John Waters to make one of his movies. (Ozon is apparently a fan of Waters, and in one scene in Sitcom the rat appears in a neat parody of the opening credits of Desperate Living.) The outrageousness builds nicely throughout the film: even when at one point towards the end it looks like that great attention-grabbing opening scene was just a trick to get us involved, within five minutes the plot has veered so magnificently out of control that you don't really mind about that. Amazingly, the BBFC have passed it as an 18, sausage sandwich and all, so look out for it at your local arthouse soon. 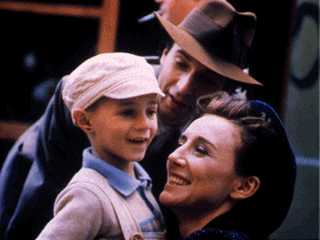 There are some films that are impossible to summarise in a single sentence without completely misrepresenting them, and Roberto Benigni's concentration camp comedy is one of them. See what I mean?

Benigni is one of Italy's best-loved comedians, as was obvious to anyone who sat with the large number of cheering Italians in the audience for this screening. He's made a number of very popular comedy films, but as is usually the case with non-English speaking humour, they've not had much of a showing outside of his homeland before now. Over here he's best known for his cameos in Jim Jarmusch movies such as Down By Law and Night On Earth, as well as playing the son of Clouseau in the ill-fated Son Of The Pink Panther. Life Is Beautiful is finally giving him the international audience he deserves.

It's a film of two halves, and I suspect the first half is more along the lines of what Benigni normally does: a light romantic farce where his character Guido woos Dora (Nicoletta Braschi) away from the arms of a local civil servant. He's a great natural clown, and his day job as a waiter gives him lots of scope for some blindingly choreographed slapstick sequences. But this is Tuscany in 1939, and Jews such as himself are starting to notice the changing climate. Even in the midst of this he continues to make jokes, posing as a Fascist school inspector to visit Dora at work and displaying himself to the children as a fine example of Aryan purity.

Within a few years Guido and Dora have married, and have a son, Joshua (Giorgio Cantarini). By now the war is at its height, and inevitably the day comes when Guido and Joshua are taken to the camps. Dora's relatives in the party have made plans to keep her safe, but she demands to be taken as well so she can be as close to Guido and Joshua as possible. In desperation, Guido tries to keep Joshua unaware of what's going on, explaining that the camp is a great big game and that he must follow the rules to win first prize.

The tone for the darker second half is set when a German soldier barks out the camp rules in German, and Guido translates them into hilariously nonsensical Italian to keep Joshua happy: it's terrifying and funny at the same time. Having seen three other films in the last twenty-four hours which try to get laughs out of unbearable situations (Titanic Town, The Theory Of Flight, Sitcom), this is finally "black comedy" in its purest form: laughter as a necessary means of day-to-day survival. As Guido's imagination rockets into ever-higher flights of fantasy to cover the worsening situation from Joshua, Benigni carefully treads the line between horror and humour and achieves an astonishingly measured tone throughout, so that the moment when Guido turns a corner in the camp and discovers the horrific level of the genocide has an extraordinary impact. See it with an open mind (unlike some of the critics I've read) and prepare to be astonished. 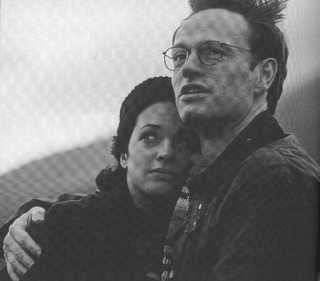 B Monkey has taken a ludicrously long time to make it to cinemas, and nobody's willing to say why. Director Michael Radford dropped dark hints in his post-film talk: "Film-making is a collaborative process between technicians, actors and, most importantly, producers... and I've been a real collaborator on this film." Aside from a very rushed introductory sequence setting up the characters (which looks like it was bolted together in the editing suite from leftover bits of film and voiceover narration), it's difficult to see what the problem was that the producers had, other than the fact that it doesn't look like anything else out there. (Which, of course, is considered a problem in some circles these days.)

Actually, the one thing it does look like is a modern French thriller, in the style of Luc Besson and his imitators. The story of Beatrice (Asia Argento),an Italian jewel thief who falls in love with a dullish schoolteacher and jazz fan (Jared Harris), while she tries to avoid her former criminal colleagues (Rupert Everett and the annoyingly ubiquitous Jonathon Rhys-Meyers), isn't really the point of the film: it's the style. Flip dialogue, glossy photography, flashily shot action, great use of music, not much else, but so what? These aren't real people, they're movie characters, and though you may not particularly identify with them, you're having so much fun watching them that you don't really mind.

The huge delay between the shooting of the film and last night's world premiere has had one useful effect on the film, in that Rupert Everett subsequently went on to make My Best Friend's Wedding and is now pretty damn hot all over again. He has a great time as the "father" of Beatrice's criminal family, making the most of scenes such as the one where he's sitting by the remains of his vandalised piano. "Do you play?" he asks Harris. Harris replies, "Only a bit." "Well, there's only a bit left..." The two leads make a great couple: Jared Harris is everything you'd expect from the son of Richard, and it's nice to see Asia Argento outside of the context of her father Dario's slasher flicks. (So that's what she looks like without a knife in her head.) And for those of us who live in London, there's the use of some gloriously unusual locations (including what looks suspiciously like the deck of the Ross Leopard, the trawler where I heard the guitar stylings of Dave Allen only last night). B Monkey's London looks like the London you try to convince your foreign friends you live in, rather than the real one: that can't be a bad thing, can it?

Ken - In essence, the story of an unlikely romance between a stunningly attractive jewel thief (Asia Argento) and a mousey jazz-loving schoolteacher (Jared Harris). It may take some effort to suspend your disbelief that she would actually fall for him: rather than her naked body, it's a jazz tune that gives him an erection. That apart, this film may well turn out to be one of the must-see films of the year, despite the fact that it's taken a very long time to get to the screen: presumably because the film doesn't readily fit into any category, producers and distributors have shied away from it. One puzzle I have is why Asia Argento turned up at the screening wearing a dress made of tin foil. (If you have to ask, you'll never know - Spank)

Rob D - Basically, Fast Food is about a telephone engineer who returns to London's East End, where he grew up, after several years away following some unspecified crisis. He is shocked to find that his childhood friends are living together in a tower block dealing drugs and committing petty crimes, including killing the pizza delivery man for getting the order wrong! He gets involved with a blind telephone sex operator (why blind - don't ask me) who he remembers from when he was a kid and sets about trying to rescue her from her violent, sadistic pimp. All this takes place as his friends plan to rob said pimp of his ill-gotten gains. The film has a happy ending - the pimp gets killed by the girl who miraculously regains her sight and they sail off into the sun together with the pimp's money; his friends realise their mistake in getting involved with all these nasty druggies and guns. The film involves a lot of stuff that seems to have been dropped in at the end when someone realised the plot wouldn't work (such as the hero and the girl coming back to life after being run over): this is probably OK in some films, but in a hard edged gangster pic? Having said that, there are a couple of good bits, including the effects on our hero of his first try at cocaine (involving weird camera angles but no other special effects). The use of London locations is excellent. The scenes when the pimp finds the hero sharing a bath with his girl left the same sort of taste as the chainsaw scene in Scarface but not quite as nasty. Overall, I think the film seemed as if not a lot of thought had gone into it, or that it had been made by enthusiastic amateurs.

Jon - Typical Hal Hartley, a lot better than his Edinburgh offering The Book Of Life (but then it couldn't be any worse). Not his best, but by no means unwatchable - it's a trifle long and could have done with some editing down. But there are some memorable scenes, including a man vomiting over a woman's posterior.