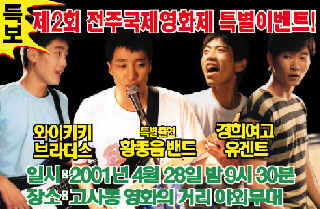 Don't get me started on ParcelForce. Over the last couple of months I've been ordering DVDs from a number of exotic locations (well, Japan and France): invariably, they have no trouble at all in the delivery process until ParcelForce have to get them from an East London sorting depot to my home, whereupon they inevitably balls it up. I'm currently chasing them about three separate disks that have got lost in the post during the past month. So when an apologetic ICA bod announces that the print of Waikiki Brothers has got lost in transit, I think we all know who to blame. Still, in compensation we get to see the movie for free: albeit on a hastily imported VHS copy, with slightly fuzzy images and a soundtrack that clips horribly during the louder portions.

Waikiki Brothers is a South Korean film: as noted at last year's LFF, the country's producing a hell of a lot of movies at the moment, although they tend to end up on the festival circuit rather than getting full international distribution. It's the old story of the rise and fall of a band of musicians, with the twist that there isn't really any 'rise' to speak of here: the Brothers are a relentlessly mediocre bunch of jobbing musos who'll play any social occasion for cash. When the film opens, half the members of the seven-piece group have left: we follow the remaining four during a club engagement in their home town, struggling to make ends meet at a time when it's easier for a venue to run a karaoke night than hire a band.

The problem with Im Soon-Rye's film is that it's a comedy-drama, in that slightly irritating way that's so popular on prime-time UK TV at the moment. It's so desperate to try and balance out every funny moment with a dramatic one, it fails to satisfy on either level, resulting in a fairly uneven tone throughout. Still, there are a couple of amusing scenes buried in there, most notably a Korean schoolgirl band's version of I Love Rock 'N' Roll that genuinely gives Joan Jett a run for her money. 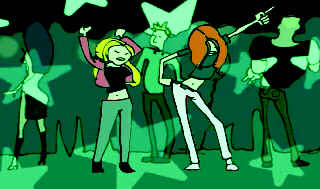 It's always a pleasure to see what animated delights Jayne Pilling and her team have tracked down for their annual showcase, and this year is no exception. In fact, this is probably the most entertaining collection of shorts of the last few years: sometimes a programme of funny and moving films can be disrupted by a piece of pretentious artschool wank, but that doesn't happen here. The closest it gets is Shadow Cycle, Oscar Grillo's fantasia set to a Linda McCartney composition. For the first few minutes, as a child passes through a succession of extraordinary fantasy worlds, you're stunned by the visual imagination on display, as well as the seamless melding of traditional and digital techniques. But the film drags on and on from there: it passes at least four different points where it should have ended, before it actually does finish somewhere around the 21 minute mark. A similar complaint can be raised with René Castillo's Down To The Bone, which has one nice idea (a man discovers that the afterlife is a tacky Mexican bar full of skellingtons) but stretches it out for far too long.

Everything else is great. Peter Dodd's Blink is a beautifully-designed piece about a boy who discovers he can make things disappear by not looking at them: it has the slick look of an advert, but doesn't outstay its welcome. Serge Elissaide's Raoul Et Jocelyne is the most dialogue-driven piece here, a zany post-modern romance visually distinguished by its scribbly style and the unusual 9:16 framing (i.e. everything happens in a tall, thin window in the middle of the screen). Myung-ha Lee's Existence is a delightfully downbeat vignette of a cat and a dog drowning their sorrows in a bar, which actually got an 'awwwwwwwww!' from the audience at the end. And Test by Vaclav Svankmajer - presumably some sort of relative of the great Jan Svankmajer - is an evil little stop-motion gag, very much in the Czech surrealist style.

The best dramatic short in the collection is Suzie Templeton's Dog, a grimly atmospheric short story in the Raymond Carver tradition. It's enhanced by some beautifully detailed model animation, and carries a genuine sting in its final line. But if you're looking for funny cartoons, the two best are the ones which start and end this collection. Geraldine by Arthur de Pins (illustrated here) is a sharp and funny story about a man learning to cope with his sudden transformation into a woman: it's all bold lines, bright colours and speeded-up nonsense voices, and is a wee delight. But Ralph Eggleston's For The Birds, the latest short from Pixar, is the absolute show-stopper of the set. Like all their best work, it's flawless computer animation, but doesn't just rely on that: the technical whizz is accompanied by a sharp sense of character and terrific comic timing. Hopefully they'll find some way of getting this seen by the Monsters Inc.-loving masses soon. 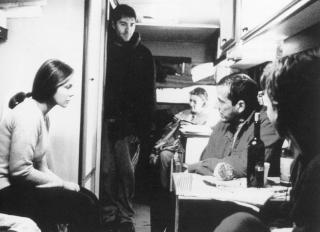 A surprisingly full house for Francesca Archibugi's movie, which means I have to wait in the returns queue and go through half an hour of will-I-won't-I-get-in panic before getting the one of the last few seats in the cinema. Obviously, a large number of Italians in the audience partially explains its popularity: but there's possibly a post-World Trade Center feeling at work here too, as Domani documents the aftermath of a disaster - in this case, an earthquake in a small Italian town - and shows how people help each other through it.

There's a slightly soapy interweaving of multiple subplots going on here. The main characters we follow are deputy mayor Paolo Zerenghi (Marco Baliani) and his wife Stefania (Ornella Muti), whose family are stuggling to cope with the damage caused to the house they built themselves. But we meet a variety of other people as well, including the mother and son forced to put up in the Zerenghis' mobile home, the two little girls whose friendship is undergoing the usual teenage trials, and an English couple (James Purefoy and Anna Wilson-Jones) in town to do some restoration work on the local church. With many people moved into tents and portakabins as their homes are demolished, tensions in the town are starting to rise: and the infrequent aftershocks aren't helping matters either.

Archibugi handles all this very effectively indeed, never going for the sentimental approach or a simple division of characters into good or bad: these are just people, forced into making decisions by extreme circumstances, and having to live with the consequences of those decisions being right or wrong. The acting is fine throughout, notably by the two girls Vale and Tina (Margherita Porena and Michèle Moretti). The exceptions to this are the couple of scenes involving the English couple, which sound a bit stilted in comparison: but they're compensated for by some lovely bits involving James Purefoy's atrocious grasp of the Italian language, which is neatly conveyed in the subtitles. ("I hath learned it from textbooks." "What, fifteenth century ones?") With some understated but wholly convincing effects work for the earthquakes themselves, this is a fine piece of humanistic storytelling that'll hopefully get an international audience.

Old Lag - There are times at the London Film Festival when you sit in the dark and wonder why on earth you chose this film you are watching, and so it is with Cool and Crazy. The Norwegian fishing village of Berlevåg on the Arctic coast is dying as the fish processing plants close. Like the death throes of a landed fish, the only things for men to do are smoke yourself quietly to death or join the male voice choir and sing about the female filleters in the fish processing plant. Thus we are treated to the choir singing in the outdoors in various locations at the different seasons of the year, which gives for some splendid calendar scenes, particularly those in the face of the midnight sun and spring after the crashing waves of winter. Intercut with these are vox pop clips of the choir members which are touching in the way the ageing choir functions as a self help group. The finale is as the boys go on tour to Murmansk in Russia, and are then filmed singing in a near zero visibility snow storm. The only thing missing was them doing the same with no clothes on in the fashion of naked WI calendars. The songs were very good and interestingly often about very local issues. This feature length documentary was the year's top grossing film in Norway - but then there are only 3 million people there.