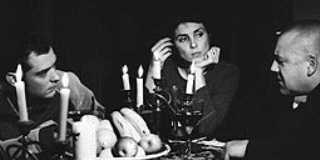 It's a generally acknowledged fact that when two or three thirtysomethings gather together, they will talk interminably about children's TV programmes they remember from the 1970s and bore the arse off anyone else within earshot. So here goes. Anyone out there remember You Must Be Joking? Part of ITV's afternoon lineup in the mid 1970s, it was basically a sketch and song showcase for the collected brats of the Anna Scher Theatre School. It would be forgotten today if it wasn't for the fact that a few of the kids who made their first appearances on the show went on to much greater things: without it, Pauline Quirke wouldn't be the public face of BBC digital telly, and Phil Daniels wouldn't have had that knee-trembler with Leslie Ash in that alley in Quadrophenia.

Their former colleague Ray Burdis hasn't had the same impact on the viewing public, but he's been doing all right. He founded a music video production company with Dominic Anciano, and the two of them moved into movie production in the late 1980s, most notably with The Krays. As a writer/director/star team, the pair were seen last year in Operation Good Guys on BBC2, a sitcom in the form of a fake fly-on-the-wall documentary following a police task force. Their first movie as directors, Final Cut, uses a similar sort of format to impressive effect.

The film is set at the wake of a recently deceased young actor, Jude (Jude Law). The first sign of what's to come happens quite early on, when mourner Ray (Ray Winstone) suddenly turns to the camera and yells at them to back off (or words to that effect: you know Ray Winstone). We realise that a documentary film crew is filming the wake, and we're watching the results. The filming has been organised by Jude's girlfriend Sadie (Sadie Frost), who tells the assembled mourners about the film Jude was making of his life when he died: she plans to use footage of the wake to finish it off, and invites them to watch a tape of what Jude had completed so far.

Jude's film opens innocently enough with some banter to camera and assorted film of parties. Then suddenly he pulls out a shot of one of the mourners having a pee in his toilet. This is the point where Jude starts to reveal just how much filming he's done. Using a series of hidden cameras scattered throughout his house (in the loo, bedroom and dining room), and taking another camera along whenever he's gone out with his friends, he's been obsessively recording their private lives for some time now. As his film progresses, it shows a large number of scenes that the mourners would have liked to keep quiet: drug taking, malicious gossip, affairs, violence. All this is intercut with the reactions of the mourners as they watch their lives being pulled apart on screen, plus (in one or two hilarious instances) their attempts to justify their actions direct to camera.

Final Cut sets up a very clever situation and pushes it dramatically as far as it will go. The lines between what's real and what's fake are blurred throughout, helped by the characters all having the same names as the actors who portray them. The whole "fake documentary within a fake documentary" format is carefully thought out and never cheats: the whole thing really could be done with the very small number of cameras that Jude uses. (Although when someone rips film out of a camera at the climax, wouldn't that imply that we couldn't see the preceding shot of them walking towards the camera to do it?...) If anything, the format is a little too realistic, as some of the lighting and sound are as authentically crap as you'd expect for secret filming (inexcusable in the case of the sound, as at least two scenes are almost completely inaudible). That caveat apart, it's the best British film I've seen at the Festival so far, ingeniously conceived and well acted by all concerned: especially Ray Winstone, who confirms once and for all that he can swear better than anyone else in British film today. Move aside, Richard E Grant. 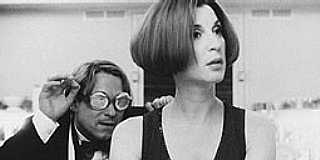 Unfortunately, Serial Lover is one of those films that it's impossible to rave about without giving away a key element of the plot. If you're prepared to take my word for it that it's a gloriously amoral French black comedy and should be seen if and when it gets British distribution, then skip ahead to that messy review of The Idiots below. Otherwise...

Claire (Michèle Laroque) is 35 years old tomorrow and desperate to settle down. She has three lovers - Charles (Michel Vuillermoz), Prince (Zinedine Soualem) and Sasha (Antoine Basler) - but can't choose between them all. She decides to invite the three of them over to dinner, along with her best male friend Ruitchi (Gilles Privat). Hopefully, by the time the evening's over she'll be able to make a decision about which one to marry.

Unfortunately - and this is the point where you really should stop reading now for maximum effect, so don't say I didn't warn you - within half an hour she's accidentally killed all four men. It doesn't particularly help that a policeman (Albert Dupontel) is prowling round her block looking for a pair of burglars. Or that her sister has brought around a few people for a surprise party. Or that the burglars have Claire's flat next on their list...

First-time director James Huth has produced a debut film that's capable of knocking your socks off as effectively as Delicatessen did a few years ago. Like that film, it uses dramatic lighting, surreal sound design and wall-to-wall music to create a comic-strip atmosphere that takes any sort of nastiness out of the violence. (Notice in particular how Claire looks immaculate throughout, even after handling several gory corpses and being knocked about all over the place.) The beautifully sick gags are carefully spread across the duration of the film, and the jokes just keep coming thick and fast between them. Huth even manages to squeeze some very silly jokes into the end credit roll, in the style of the Naked Gun movies: unfortunately some of them aren't translated and my French is a bit rusty, but I believe that in the uncensored version Claire dresses up as a giant carrot and seduces all the rabbits in town. At least, that's what the credits say.

The following review was written according to the rules laid down in the Spanke 98 Vow Of Chastity.

Ken's having a day off.