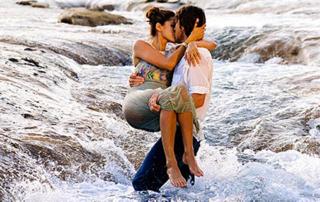 Overheard at the LFF ticket office in Leicester Square.

OLD TOSSER: I want to see that film about Lord Haw-Haw. You know, the German collaborator. James Joyce, his name was.
LFF STAFF: I'm afraid I don't know that one. What's it called?
OLD TOSSER (GRUMPILY): Well, it's your festival.

I'd like to reassure readers that the Irish part of my genetic makeup was screaming "it's WILLIAM Joyce, you English TWAT" at him, in my head. (In case you think I'm being harsh, a quick bit of research has revealed that there's no film about Lord Haw-Haw at "your festival" at all. There is one at the Oxford International Documentary Film Festival, though...)

Meanwhile, in another part of the Square, it looks like we have ourselves a Wilson brothers vanity project: directed by Andrew and Luke, written by and starring Luke, with the more famous Owen in a supporting role, and with an end title card that seems to suggest it's been on the shelf for two years so far. Wendell Baker (Luke Wilson) drifts through his life in Austin, wholly unable to commit to his girlfriend Doreen (Eva Mendes), and relying on his fake ID business to make ends meet. Eventually the law catches up with him, and he has to spend some time in jail. Like that Sentimental Bloke some three days and eighty-five years ago, he comes out of prison determined to turn his life around, and accepts a job in a retirement home as a way of getting a foot in the door of the hotel business. But pretty soon he finds that the place is in a mess, and that head nurse Neil King (Owen Wilson) is to blame.

With Wilsons involved in both writing and acting, The Wendell Baker Story feels like nothing so much as a low-calorie version of a Wes Anderson movie, without the anal approach to visual styling. It's pleasant enough to look at and listen to (with a somewhat overstuffed set of country tunes on the soundtrack), and has a good smattering of funny lines (Wendell thinks about emigrating to Mexico because "it's the country America could have been"). But there's nothing really there if you probe too hard, and it reminds me a bit too much of Welcome To Collinwood - another all-star comedy which seemed entertaining enough at the time, but which evaporated from the memory within a week of seeing it. The main thing that redeems this film is that all-star cast: there's the Will Ferrell cameo that all American comedies are now bound by law to include, but you also get Seymour Cassel and Harry Dean Stanton as two of the spunkier residents of the retirement home. Still, in the end, your reaction to the film will depend on your reaction to the Wilson brothers' charm - some people like it, some people (glances towards bottom of page) don't. 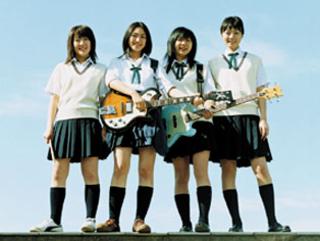 A Japanese high school is having its annual festival, and the school's all-girl rock band has a problem. With three days to go before their big performance, two of the members have dropped out - one through injury, the other through one of those typical arguments between girlie best friends. The remaining three girls rummage through their record collections for material they can perform as a reduced unit, and come across a tape of songs by the Blue Hearts, an eighties Japanese punk band whose biggest hit was the infernally catchy Linda Linda Linda. They recruit Korean exchange student Son (Bae Du-Na) as their new vocalist, even though she barely speaks Japanese and has no proven singing ability, and start practising round the clock.

Linda Linda Linda has been getting raves all over the festival circuit this year. As someone who keeps half an eye out on trends in Japanese cinema, I really can't understand why. Over the past couple of years, there have been a number of hit Japanese films based around the idea of teenagers working to perfect an activity that wouldn't normally be associated with their gender - so Waterboys follows the training of a male synchronised swimming team, while Swing Girls tracks the fortunes of a schoolgirl big band. Nobuhiro Yamashita's version of this plot is a less interesting variation on the theme, because although it knows there's a crowd-pleasing finale to head towards, it doesn't want to take the obvious route there. It isn't a matter of life and death that the girls succeed at the concert, so there's no tension on that level: similarly, the rivalry between the current and former band members is set up at the start, but hardly ever referred to again. The problem isn't that the film is doing things we've seen before, it's that it's barely doing anything at all: so although the climax is indeed fun, the rest of the film simply doesn't justify its existence.

The one bright spot in the movie is the presence of Bae Du-Na as the Korean vocalist: you might remember her from Barking Dogs Never Bite five years ago. (Yes, of course you might.) She's an outsider who doesn't quite know how to fit into the unspoken codes of Japanese society; as a result, the film's funniest moments all revolve around her, whether she's trying to conduct a faltering bilingual conversation with a boy who fancies her, or failing to understand the economic principles behind Japanese karaoke bars. And the chance to hear some vintage Asian punk rock is always fun (the soundtrack features the Blue Hearts' original versions of their songs, as well as the girls' remakes). But beyond that, I really can't see what all the fuss is about. Although given FilmFan's interest in the movie, and looking at the promo picture, I have a horrible feeling that it might just be the D.E.B.S. school uniform thing all over again... Kekexili - oh, calm down, it's easy. In Chinese, 'x' is pronounced a little like 'ch'. Try it now. Got it? Right, we'll start again. - Kekexili is a mountainous Tibetan region, best known for its antelopes. In the early nineties, poaching of the antelopes for their valuable hides was rampant, and there was a real danger that they'd become extinct. Ri Tai (Duo Bujie) forms a volunteer mountain patrol team to track down and stop poachers: unfortunately, they have no real powers, and can't do much more than confiscate hides and charge fines. When one of the patrol members is killed by poachers, a Beijing reporter (Zhang Lei) goes to Kekexili to investigate. The film follows his travels with Ri Tai and his crew as they chase after the skinners who remove the hides from antelope corpses, the gunmen who do the killing, and the boss behind the whole business.

Lu Chuan's film is a gripping thriller in the style of someone like Costa-Gavras: documenting a serious social injustice, but at the same time working as a rip-roaring piece of entertainment. He's tremendously skilful at vividly depicting the conditions the patrol have to work under - the endless distances they need to travel across the wilderness, the appalling extremes of weather, the tough moral choices they need to make when the money and resources run out.

The wholly believable performances give the film a documentary level of realism, and are ably supported by an aggressively wraparound sound mix and some breathtaking photography. You could argue that anyone could make this landscape look astonishing, but Lu's eye for an image extends well beyond that: the sight of several hundred stripped antelope corpses stretching as far as the eye can see will stay with me for a long time. Kekexili has the backing of the Asian arm of Sony Pictures, so it looks like it'll get a wider release outside the festival circuit. It deserves one.

Basically Luke is a bit of a slacker, who does his bit for NAFTA by forging Texan driving licences. When the law catches up with him, it means a spell inside, losing his gal (Texan for girlfriend), and a dead end parole job in a nursing home run by medicare swindling Owen. Yet teaming up with the ageing residents means winning back his gal, getting Owen his just deserts, and a new job in charge of a hotel chain.

I have always found Owen Wilson to be a bit of a one joke act with a stupid face. Well, brother Luke proves it runs in the family. Thus this film is not remotely funny or remotely anything come to think of it. Perhaps if the casting had been a little less incestous (yes I know they're Texans) and with maybe Owen's regular sidekick Ben Stiller taking Luke's part, things might have turned out better. Instead it fails as a comedy because it's not funny, you don't care about the characters, and there are not even enough funny set pieces in order to put together a trailer. I mean I called Elizabethtown a lazy comedy, well this is positively comatose.

Oh well, yet another lemon at LFF05 then. However my second film of the day Manderlay (review tomorrow) turned out to be a very substantial piece of work, restoring my faith somewhat.

The Belated Birthday Girl - It's the high-school festival, the rock music gig is in three days, and Kei's girl band has split up, following a minor accident and a falling out. So Kei has three days to get a new band together from the remaining members, choose some material and find a new singer. And that's about it, in this slight but enjoyable film. The title comes from one of the songs they choose to play, covers of songs by the Blue Hearts, and I've been finding myself singing the chorus of that song since watching the film. Given some of the rave reviews I'd heard, I had been expecting a lot more, but what the film did give was some sweet high-school characters, some funny and charming moments, and believable performances from the young cast. The story was extremely conventional, and you always know pretty much how it's going to end, and to be honest not a lot happens on the way, but it left me with a smile on my face and a song in my head, and that's not bad.