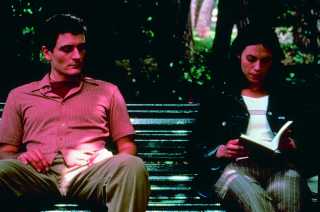 Juan (Alex Brendemühl) has just pre-emptively dumped his long-term girlfriend on the day before she was due to walk out on him. Reflecting on the nature of relationships, he decides that these things only work properly if they happen by chance: all these beautiful women that his friends keep introducing him to at dinner parties don't count, because the meeting's been forced. So he comes up with a plan for meeting a new girlfriend by accident: every day he sits on the same bench in the park, and then drinks at the same bar, waiting for someone new to walk into his life rather than actively seeking her. After some weeks of this he meets Ana (Mónica López) in the bar and Alicia (Victoria Freire) in the park. On the same day. Unfortunately, his plan doesn't cover how he's meant to choose between the two.

Another example of how Spanish comedy is one of the most underrated genres out there (see previous festivals for details). Augustí Vila's debut feature as writer/director is a charmingly ironic, talkative romantic comedy that recalls the feel of some of Eric Rohmer's work. (Rohmer is referred to in passing in one of the dinner party scenes: a situation is described as "like something out of The Green Ray", whereupon someone else asks if it's a science fiction movie.) From the setup described above, the plot takes all sorts of hilariously convoluted turns as Juan tries to play both girls off against each other, tweaking his self-imposed rules to achieve some sort of result. It's all filmed with edgy improvisational energy (most of the scenes are shot in a single long take, hand-held) and is bolstered by some sparky playing, notably in the early dinner scenes.

The only problem is, once Vila's played out all the possibilities of this three-way relationship, he doesn't really know how to end the picture, so it just stops.There's nothing wrong with leaving the audience wanting more - and it's good these days to see a film calling time after a tight 83 minutes - but those end credits are a genuine shock when they suddenly appear. And the songs - in English, written by Ian Briton - are awful. That aside, there's a lot of potential here for the future. 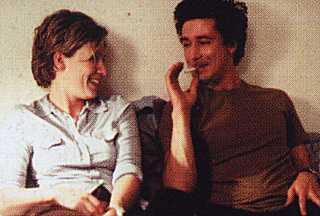 Another feature film debut for a writer/director, this time Britain's own Jamie Thraves. Prior to this, his most famous work was the video for Radiohead's Just, a beautifully crafted four minute surrealist fable (if you mentally edit out the shots of the band from it). On the evidence of that, you'd expect Thraves to have a sharp sense of narrative and an interesting visual style. On the evidence of The Low Down, you'd be wrong.

It's a slice of Camden low life centered around the character of Frank (Aiden Gillen), who works with two of his friends making props for TV comedy shows. (Adam and Joe - playing themselves - are among their best customers.) Frank shares a flat with his depressed pal Terry, played by Rupert Proctor: curiously enough, Proctor plays an alcoholic salesman in Shifting Units, the unrelated short film that showed with The Low Down at this screening, which leads to some confusing overlaps between the two. Anyway, Frank's looking to move on, and during his search for a new flat he starts seeing a lot of his estate agent Ruby (Kate Ashfield).

The main problem with The Low Down is fairly fundamental: apart from Frank and Ruby, every other character in the piece is an obnoxious twat. I've always believed that it's perfectly possible to make a good movie with characters you can't empathise with - Shallow Grave managed it by making you actively root for the downfall of the leads - but it doesn't work here. It's not as if these people are what Frank's trying to escape by moving out: by the end (with one exception) he's still as attached to them as he was at the beginning. At one stage the movie cheats by showing us a gun in the bedroom of one of the characters, leading us to believe that a well-deserved bloodbath might be on the cards: but no such luck.

For a movie by a pop video director, it's surprising how visually dull The Low Down is. The grubby Camden exteriors don't lend themselves to visual gloss, of course, but there's no attempt made at trying to convey why Frank's stayed here so long. And the dialogue scenes are heavily over-reliant on sub-Attachments extreme closeups of facial parts, making it look like a TV film that's got into cinemas by accident. There are a couple of scenes that give you an inkling of what Thraves was trying to achieve here, but most of it's an inarticulate mess: by the time we see Frank falling asleep standing up while shaving, we're right there with him. Which isn't the point when you should start empathising with a character. 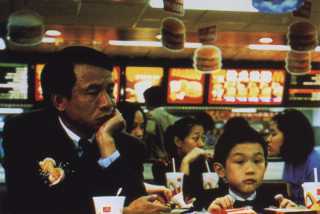 NJ Jian (Wu Nianzhen-Jen) is a Taiwanese family man going through a bit of a crisis. Well, several crises, if the truth be told. His moderately responsible job in the computer industry (I like this guy already) is going down the toilet, and a Japanese merger is on the cards. His mother-in-law is laid up in his house following a serious stroke, which has made his wife so depressed that she's joined a religious cult. His teenage daughter's acting as a go-between for their neighbour's daughter and her boyfriend, while his young son's engaged in an all-out war of attrition and waterbombs with an unpleasant teacher and his daughter. When the college girlfriend he jilted 30 years ago suddenly appears in town again, NJ is forced to reassess where his life's heading.

Taiwanese Beauty, perhaps? Or a slower-paced Magnolia with less frogs? However you want to describe it for Western audiences, Edward Yang's three hour soap is a delight to watch. Initially it's tricky to keep up with the huge number of characters and subplots as they're all hurled at you during the opening wedding sequence: but as you stick with it and settle into the pace, some good use of repeated locations and visual rhymes helps you get a handle on what's going on. (There's a particularly lovely scene where the former lovers meet up in Japan, echoed by the first date of NJ's daughter.)

The performances are all great, with Jonathan Chang a particular stand-out as NJ's son Yang-Yang, who manages to be cute without nosediving into sentimentality. And Yang Wei-han's photography makes the locations in Taiwan and Japan look gorgeous. With the exception of one bizarrely out-of-place gag where a TV news report uses StreetFighter 2 graphics for a crime reconstruction, it all adds up to a warmly human epic: it probably doesn't really need to be three hours long, but you never mind it taking its time to make its points.

Ken - Curious title that obviously encourages you to go and find out what fits the description. As it turns out there is nothing better, just sex, sex and more sex. I'm not saying it's porno (it's all done in 'the best possible taste') but you don't want to watch this with your elderly relatives around. In truth it's a very funny comedy and portrays sex as it really is (complete with elbows). It also brings up all those old subjects about the differences between the sexes - such as leaving the toilet seat up. While I've not known any women to leave the toilet seat up isn't it about time someone (and it might as well be me) pointed out that there are a lot of women out there who get off the toilet and don't close the lid? Still, back to the movie. It is Australian and well worth seeing as a contrast to all those look alike Hollywood movies.

Ken - Late comment on yesterday. Brilliant, couldn't find anything to criticise, so will just complain about the LFF's organisation. They printed 7:30 on the tickets. Why were we still listening to some bloody awful organ music over ten minutes after that? If you can't keep to time at least show us some commercials. Even if it didn't keep us better entertained the revenue could defray some of the cost to keep the ticket prices down.