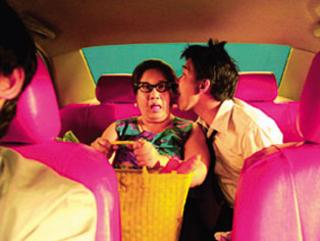 It's hard to believe that this will be the last day of my struggle to find polite ways to tell LFF staffers "fuck off with your free copies of The Times." Polite ways, mind you. I'm not a monster. Anyway, somewhat uncharacteristically, the LFF programmers have chosen to buck the usual trend by scheduling three of the best films I've seen this year on the final day of the Festival.

The first of those films is the new one from Thai director Wisit Sasanateng, whose ultracamp Western Tears Of The Black Tiger was a big international hit four years ago. His followup is the story of Pod (Mahasamutr 'Jean' Boonyarak), a country boy who's moved to Bangkok to seek fame, fortune and a tail (his grandma insists that everyone who lives in the city becomes so special that they grow one). As he moves from one dead-end job to another - sardine packer, security guard, taxi driver - the few constants in his life are the people he gets to know there. The most important one is Jin (Sangthong 'Jeed' Ket-Utong), who works as a cleaner at the office where he's a guard. She's possibly suffering from OCD, and is a little too obsessed with an Italian book she owns but can't read: still, she's the closest thing to a dream that Pod has. Particularly when his other friends include a waitress descended from a Chinese emperor, a chain-smoking teddy bear, and a dead motorcycle taxi driver.

The roots of Citizen Dog are fairly easy to spot: with its digressive story, hyperkinetic camerawork and constant narration, it's pretty much a Thai version of Amelie. There's one important difference, though: whereas Amelie's constant sugary happiness could be an irritant to some viewers, Dog has a peculiarly Asian melancholy running all the way through it. It's very reminiscent of the way Wong Kar-Wai tells his love stories. Remember the bit in Chungking Express where Tony Leung's telling his washcloth to stop crying? Well, a lot of this film's pitched at that sort of emotional level: when the teddy bear is reduced to picking cigarette ends off the pavement to smoke, it's ridiculous, yet genuinely affecting.

And in case you were wondering, Sasanateng's style hasn't calmed down in the four years since Black Tiger's Pierre et Gilles-influenced visuals - if anything, it's got even more extreme. Citizen Dog was shot on HD video, and actually uses its intense artificiality as a feature, rather than something to cover up in post-production. The sets look even more fake, the colours are even more dazzling. If there's a flaw in this film, it's the large number of musical montage sequences that hold up the plot in an irritating fashion: because despite all that stylisation and surrealism, we get to become quite fond of Pod and Jin and want to see what'll happen to them next. Which is quite an achievement, when you think about it.

4.00pm: Everything Is Illuminated

I don't know much about Jonathan Safran Foer's book Everything Is Illuminated, other than there was a period a year or two ago when its distinctive hand-lettered cover seemed to be in the hands of every tube passenger who wasn't reading The Da Vinci Code. Now Liev Schreiber, the actor and Zeppo Marx lookalike, has written and directed an adaptation of the book, or at least (from what I understand) one of the main threads in it. Elijah Wood plays the author Jonathan himself, a young Jewish man so obsessed with his family history that he obsessively collects any items he can find relating to it. When he acquires a 1940 picture of his grandfather posing with a mysterious woman in Ukraine, he's determined to track down the story behind it. And with the help of local guide Alex (Eugene Hutz), accompanied by his grandfather (Boris Leskin) and the officious seeing-eye bitch Sammy Davis Jr Jr, that's just what he does.

It's funny how with normal first-time directors, you'd concentrate on the things they do well: but when an actor gets behind the camera for the first time, the impulse is to leap on what they get wrong. Which makes it all the more remarkable how effectively Schreiber gets the story on screen here. Considering the literary source, it's surprising just how much Schreiber trusts in the visuals to tell his story: many sequences in the film, including some of the most emotionally powerful ones, are played out without any dialogue at all. He's helped enormously in this regard by his cast, although to be honest Elijah Wood isn't a particular standout - he's more the still centre around which the rest of the story revolves, though he's certainly effective at that level. But Eugene Hutz's hyperactive malapropic turn as Alex has Best Supporting Actor written all over it: he narrates the film, as well as acting as translator between Jonathan and the Ukranian characters, and it's a tribute to his skill that we never get tired of his voice even though it's the main thing we hear. (Hutz's band, Gogol Bordello, also have some musical fun on the soundtrack.)

The other key thing about Schreiber's direction is that he gets the tone exactly right. Given the themes involved, it becomes apparent very early on that the fish-out-of-water comedy of the first act will have died down substantially by the third. But Schreiber calibrates that change exquisitely, avoiding the messy gear shift that ruined the flow of Gravehopping yesterday. In fact, scrub what I said yesterday: this may be an American production, but effectively we have two Moderately Depressing Comedies From The Former Soviet Bloc in this year's Festival, and this is the better of the two. 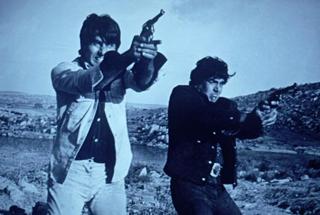 Over on the other side of Leicester Square, George Clooney is in town for the Closing Gala screening of Good Night, And Good Luck. Which is all well and good, but the LFF programme note for Sholay (showing at the same time) also held out the hope that "some of the stars of the film will attend the screening." The possibility of being in the same room as Amitabh Bachchan, the man voted as greatest star of the millennium in a BBC poll, seemed like an even more fascinating possibility than meeting Gorgeous George. Sadly, Amitabh didn't show, and the film was only accompanied by a representative of the Sippy family which produced it. In fact, it transpires that one of the plans for this screening was to celebrate the contribution that British technician Jim Allen made to the film - and tragically, he died only last week.

But in the meantime, we still have the film, which has been one of the best-loved classics of Bollywood cinema since its release thirty years ago. It still is: there's a section of the audience at tonight's screening who are obviously seeing it for the umpteenth time, cheering the entrances of all the main characters, applauding at the end of songs and chanting along with their favourite bits of dialogue. It's the story of two lovable rogues, Veeru (Dharmendra) and Jai (Amitabh Bachchan): sure, they do bad things, but former police chief Thakur Baldev Singh (Sanjeev Kumar) believes they have good hearts. So he gives them a piece of work to do - track down the evil bandit Gabbar (Amjad Khan), whose thugs have been terrorising the village, and bring him back alive. It turns out that Singh has very personal reasons for wanting Gabbar to be brought to justice, and pretty soon both Veeru and Jai have their own reasons too.

Ramesh Sippy's film was an enormous production for its time, the first Indian movie to use 70mm photography and multi-channel sound. (Although as was typical of Bollywood productions back then, the high frequency end of that sound is capable of killing small animals.) To this day it still feels like a big movie, although its goodies-versus-baddies plot is as simplistic as can be. But Sasha Sippy nailed the film's appeal perfectly in his post-film Q&A: it may be a bit kitsch (notably in the groanworthy gags and rampant comic mugging of the prison sequence), but it's still rock-solid entertainment, and thirty years on there are still very few Bollywood films that can match its overall excellence in every single department. Bachchan and Dharmendra are cheerable heroes, Khan is an eminently hissable villain, and the action scenes involving them have an authentic feel of pre-CGI danger to them. Maybe it was a bit much to expect Bachchan in the flesh, but his movie made for a rather splendid alternative Closing Gala.

End-of-Festival analysis from them - and me - will be coming soon in The Wrap Party. Come back in a few days once we've had time to think about it.