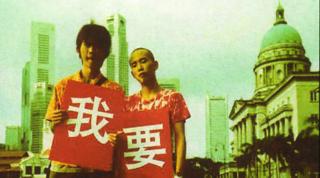 Just a quick glance at the photos in this year's LFF review pages will confirm there's been a hell of a lot of coverage of Asian cinema. No real surprise to any regular readers who've worked out my own personal obsessions, of course: but it still seems to be a lot more than usual. I can remember in my early years of festival-going sometimes looking at my list of selections and thinking "oh dear, that's a bit heavy on Hollywood stuff, I should probably balance it out with films from elsewhere." This is the first year I can remember thinking that, but with 'Hollywood' replaced by 'Asian'. But it's not a conscious thing. After all, it was only a couple of days ago that I realised my final day of LFF 2003 was going to be spent entirely with movies from that continent, covering Singapore, Bhutan and Japan.

15 follows the misadventures of five fifteen-year-old boys in contemporary Singapore. Vynn (Vynn Soh) and Melvin (Melvin Chen) are plotting to disrupt their school's concert with obscene songs of their own devising. Their former friend Shaun (Shaun Tan) has left them, and spends more time nowadays hanging out with Erick (er, Erick - no real effort's been made naming characters here, as you can see) and the suicidal Armani (Melvin Lee). They spend their days getting piercings, picking on the English-speaking kids, and wandering around town shouting random insults about each other's mothers.

After countless Asian films with one or two Neurotic Boy Outsiders as supporting characters, here's one whose cast is made up entirely of them. Royston Tan films their stories in a disjointed, hyperactive style: clashing film stocks, a frenetic techno surround sound mix, captions flashing up on the screen like Godard on diet pills. There's also an engagingly sick sense of humour on display: for example, a long central section, inspired by Armani's desire to kill himself and a general feeling that "suicide's the latest thing". It starts with a cartoon montage of different suicide methods, and follows that with a tour round Singapore in which its tallest buildings are rated in terms of how effective jumping off them will be.

But these elements are balanced out by less impressive sections - a couple of scenes seem designed purely to gross out the audience, and the sequence of Shaun forcing himself to swallow two condoms full of pills for smuggling purposes certainly works on that score. You could also take issue with the adolescent approach to sexuality, even though it could technically be justified by the characters being adolescents. In the end, there are just too many different forces fighting it out for control of this film, and it ends up being a bit of a mess, albeit one with some watchable individual sequences. 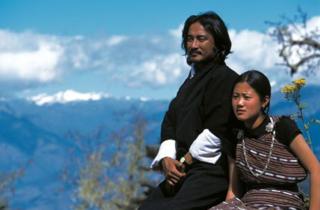 Dondup (Tshewang Dendup) has been a government official for a couple of weeks now, working in a small village in Bhutan in the Himalayas. And quite frankly, he's bored stiff: he has dreams of moving to America, and his job isn't getting him any closer to realising them. When he finds out there'll be someone in the nearest town in a few days who can help him wangle a visa, he's off like a shot. But he misses the bus to town, and ends up having to make a much longer journey than planned. On the way, he reluctantly picks up a number of travelling companions: a monk, a drunk, an apple seller, a rice paper maker and his young daughter. During the journey, the monk tells the cautionary tale of Tashi (Lhakpa Dorji), and what happened to him when he escaped to the land of his dreams.

Writer/director Khyentse Norbu was here in 1999 with his debut feature The Cup, and the same quiet storytelling intelligence is at work in this followup, apparently the first film ever to come out of Bhutan. Norbu made his name back then as the only Buddhist monk working as a film director: despite (or because of?) that background, the story doesn't bash you over the head with its moral lessons. It's happy to merely suggest, and leave the viewer to make up their own mind, just as Dondup is left to make up his.

As with The Cup, the visual aspects of this movie will provide its most immediate appeal. The journey scenes are filmed in the lushest natural paradise imaginable - Norbu is obviously aiming for the reaction "he wants to leave this for America?", and he succeeds. Their look contrasts nicely with the muted colour palette used for Tashi's story-within-a-story. If there's one unsubtle touch, it's the symbolism of Dondup's travelling outfit: the repeated shots of his hightop sneakers and I Heart NY t-shirt hammer home his obsession with the US a little too hard. It's the only thing that clashes with the subtle, warm, humorous charm of the rest of the film. 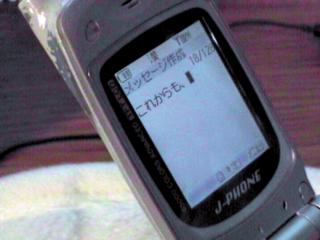 Paul Morley, back when he was running the publicity department of Zang Tumb Tuum records, once explained why the Art Of Noise's publicity photos depicted spanners rather than the musicians involved: "because a spanner is intrinsically more interesting than Howard Jones." Which ties in with why I'm at NFT3 on the last night of the festival, rather than at the Odeon Leicester Square for the Closing Gala of Sylvia: because a seventy-five minute close-up of a mobile phone is intrinsically more interesting than Gwyneth Paltrow. Yes, you read that right. Pretty much all of the running time of The Letter, written and directed by 17-year-old Sasaki Yusuke, consists of a head-on shot of a mobile phone's screen. It's a story of adolescent friendships, told entirely in Japanese text messages. See that Kevin Spacey lookalike guy from the Orange Film Commission Board adverts? He's sitting in front of me masturbating like a bonobo.

Actually, it's not all phone-on-phone action. There's a brief pre-credits sequence, shot from the unnamed protagonist's point of view, in which he hesitantly says goodbye to schoolfriend Asai (Ryoma Takeno) for the day. It establishes that they'll both be spending the evening at home revising for a test, and that our hero has next to no verbal communication skills. For the rest of the film, we're in his bedroom watching him send and receive text messages. He starts with a faltering message relay with Asai: he keeps deleting messages part way through and rewriting them, so he's obviously trying hard to say the right thing. But Asai gets bored and says he's going to bed. Our hero then texts another friend to ask "has he said anything about me?" Clearly, what's not being talked about is as important as what is being talked about. We have a new genre: subtext messaging.

This screening of The Letter had, I think, the highest walkout rate of any film I've ever seen: about ten per cent of the audience had left by the end. Which is strange, because we all went in knowing exactly what this film was going to entail. Admittedly, Sasaki doesn't make things easy for the viewer. Visually, it's dog rough, shot on a domestic DV camera where the auto focus is continually straining to keep the text visible. The mobile text is shot point-of-view style at a 45 degree angle, leading to the amusing spectacle of an entire audience tilting their heads, even the ones who can't read Japanese. And the sound is recorded through the camcorder mike, so it's all high volume camera whirr plus frequent static buzzes and clicks caused by phone interference.

And yet, somehow, it just about works. As the title implies, it's like a high-tech updating of those letter-based novels that were popular a century or two ago, except with a lag of one to five minutes between each exchange of messages, adding some real-time tension to the narrative. (If you tried to read Les Liasons Dangereuses while suffering mild concussion, it'd probably feel like watching this film.) And though there's barely enough text in the script to fill up a single sheet of A4, it genuinely is a narrative. If it wasn't, then we wouldn't have had the extraordinary sight that climaxed my 2003 London Film Festival: a room of spectators looking at a screen where the only thing visible is a mobile phone charger light in a darkened bedroom, all willing the phone to ring. Not even Sylvia Plath could have pulled that off.