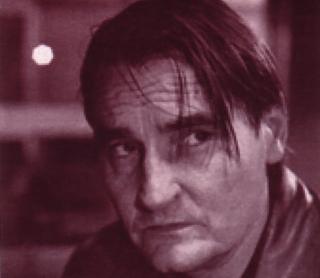 My main gripe about the Providers Of High-Spec Fully Equipped Offices On Flexible Terms Worldwide who sponsor the LFF is this: like most people I know, I'll never have any need for their services, and resent having them plugged at me at the start of every film. But on the other hand, virtually everyone I know in London reads Time Out, so I have no problem whatsoever with their sponsorship of this particular screening. Aside from their giving away half of the tickets free in a special offer, TO also arrange for everyone to get a free goodie bag on the night, containing the latest issue of the magazine, a stick of liquorice, a bottle of water, an ICA programme and a day pass for free admission to the ICA's bar and galleries. (The last of these is rather a nice perk, and inspires Jon to run around the Odeon after the screening searching for abandoned goodie bags: he subsequently strolls into the Hand And Racket proudly clutching ten free day passes in his hand.)

It's the bottle of water that worries me most about this package, though: I'm sure that director Aki Kaurismaki wouldn't approve. I first saw him at the LFF a dozen or so years ago, introducing his film Leningrad Cowboys Go America with an apology for it being "a pile of shit". In the subsequent Q&A he proved himself to be the human equivalent of his own movies: slightly woozy on cheap booze, miserable as sin, funny as hell. Both Kaurismaki and his films were a gleefully eccentric fixture at the LFF for a number of years in the 90s, but his work rate seems to have dropped somewhat lately, and he hasn't appeared in public in the UK for some time now. Pity: he's a lovely bloke. Maybe if they'd handed out bottles of vodka instead of water, we could have lured him over from Finland.

In the meantime, we have his latest film, winner of a couple of prizes at Cannes this year. The Man of the title, referred to in the credits only as M (Markku Peltola), is a welder who's mugged in the street, beaten and left for dead: when he comes to, he's lost all memory of who he is. He settles up in a dockside community, making new friends among the homeless who live in old freight containers there, and becomes particularly friendly with Irma (Kati Outinen) who works at the Salvation Army soup kitchen. Slowly but surely, M builds his life again from scratch: but of course, his other life - the one he had before he lost his memory - is still out there somewhere.

A girl behind us asked on the way out, "Was it supposed to be like that?" Well, duh. Geoff Andrew meant it when he said in his introduction that nobody else could have made this film, and it's a prime example of Kaurismaki's style in its purest form. His most effective gag is his simplest: no matter how funny, sad, dramatic or romantic the proceedings get, his actors play everything in the same deadpan, unemotional manner. It's a technique that film buffs normally associate with austere minimalists like Robert Bresson, except Bresson never played it for laughs like this.

A character like Anttila (Sakari Kuosmanen), the unofficial boss of the community, demonstrates Kaurismaki's approach splendidly: he veers wildly from philosophical musing to threats of violence within a single speech, and every line becomes hysterical simply by being played at a fraction above the level of comatose. Similarly, look at the scene where M introduces the Salvation Army band to rock 'n' roll for the first time. Other directors would have played up their reactions to get a laugh, but Kaurismaki plays them down to get a bigger one. And the less-is-more approach pays off time and time again, to incredibly charming effect. As the reaction of the woman behind us shows, not everyone will 'get' this movie: but if you do, you'll love it. 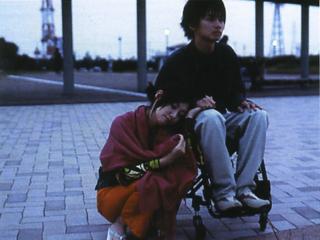 Today appears to be Physically Injured Men Redeemed By The Love Of A Good Woman Thursday at the LFF. This time it's the story of Taichi (Haruhiko Katô), a young boxer who tragically loses the use of his legs in a motorcycle accident. Confined to a wheelchair, he's no longer able to take part in the sport he loves, and comes close to losing interest in life completely. But when all seems lost he meets up with Rie Tomosaka, a spunky gambler who works as a shrine maiden in her spare time. And it's through her that he gets to meet Ryo Ishibashi, a master in the martial art of aiki-jujutsu, who finds a way for Taichi to regain his self-esteem.

As the synopsis implies, this is basically Karate Kid With Kripples, and doesn't really have pretensions to go much beyond that. All the cliches are present and correct: the Sensei's philosophical lectures, the pupil's sudden accidental discovery of how it all works, the climactic tournament featuring an opposing team of violently belligerent, slappable idiots.

But Aiki is written and directed by Daisuke Tengan, who also wrote the screenplay for Miike Takashi's Audition: a romantic comedy that suddenly took a sharp left turn into wholly unexpected territory. And while nothing in Aiki surprises the viewer to that great a degree, there are enough quirks in the characterisation to keep things interesting. The treatment of Taichi's disability avoids sentimentality almost completely, and even goes so far as to make him fairly unlikeable for most of the first half of the film. The people that help him on the right path are all entertainingly drawn, including some comic racketeers, a fellow patient who's described as a 'hospital junkie', and even the family of the man who crashed into Taichi's bike. And Ryo Ishibashi's performance as the Sensei is a marvellous mixture of showy martial arts and delicate calm, as he cunningly draws parallels between the secret of aiki-jujutsu - accepting your opponent to overcome him, rather than rejecting him - and the way that Taichi learns to accept the outside world back into his life again. Aiki won't change your life, but I suspect that it wasn't seriously trying to do that anyway.

Suzanne Vega Fanclub - So about quarter way through this Canadian indie flick, our heroine Jo meets Czech emigre Luka and says: "So you're named after the song, right?" "No," replies Luka, "I never heard of that one." To which Jo retorts: "God, they used to play it on the radio over here all the time, it nearly drove me out of my f****** mind." Now of course if I had any principles I would have walked out of the cinema there and then. However as this was quite an amusing little tale, I let that slight to Saint Suzanne go and stuck with it. Anyway, the film begins with the aforementioned Jo stuck in a relationship with one half of the brothers dim, Ted and Johnny. These two small time lowlife make a living on the deserted outskirts of Montreal, by holding up local off licences and dry cleaners. Although Jo tags along as getaway driver, when Ted decides it is time he betters himself by moving up to banks, she decides it is time to ditch the two losers. Thus while out on a shoplifting spree of her own she encounters Luka...

As indie flicks go this was quite a good one. Also as always seems to be the case with this type of genre, all of the characters veer from mildly deranged to slightly off the wall. What was an ongoing irritant though, was that every now and then the plot would be interspersed with some silent black and white footage of Leonard Cohen. Now apart from making some link with the film title (plus of course Cohen coming from Montreal) that was completely pointless. The real remarkable aspect of the film however, is that apparently no one actually lives in Montreal; as apart from the main characters and one or two others, no sign of other human life appeared to be evident. For that matter there was also something of a lack of human life in the Odeon West End, with the cinema no more than quarter full. Having been introduced to the director and three of the cast before the screening, it was pointed out that there would be no Q&A afterwards. One would hope that was not because of the disappointing turn out.

SeaPea - The singer of Can't Help Falling in Love was ejected from a library in St Martin's Street at teatime. [And he was also spotted after the Opening Gala busking by the escalator in Leicester Square tube station. Maybe he's on tour? - Spank]