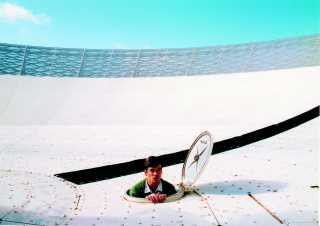 Funky Squad! Daaaaaaaa daa, da da daa, da da daa, da da daa, da da da daa daa daa (wacka wacka wacka wack)... Sorry. It's just that when you consider the rancid shite that makes it onto prime time telly here, it still staggers me that Funky Squad was buried in Channel 4's traditional Bloody Stupid slot where they put all the good stuff (Sunday morning at 2am). Made in 1995 and featuring the adventures of a quartet of groovy young hipsters solving crimes on the streets of 1970s Australia, Funky Squad was the sort of hilarious kitschfest they only seem to be able to get away with Down Under. Its writer/performer/director collective of Santo Cilauro, Tom Gleisner and Jane Kennedy were obviously names to look out for in the future. So it was somewhat satisfying when in 1998 they wrote and produced a minor comedy hit with the movie The Castle (in collaboration with director Rob Sitch).

The Dish is an even better followup: whereas The Castle could be accused of just being a TV movie that made it into cinemas, this is a full-scale film. And amazingly, given the one line summary - the story of Australia's role in the Apollo 11 moon landing - it's based on a true story. Because for all of NASA's high-tech equipment, ultimately the responsibility for transmitting TV pictures from the moon to the world rested on a satellite dish in the middle of a sheep paddock in Parkes, New South Wales. A four-man team has taken on the job: boss Cliff (Sam Neill), lovelorn Glenn (Tom Long), NASA representative Al (Patrick Warburton) and the short-tempered Mitch (Kevin Harrington). "You must be very nervous having all of this responsibility", says a reporter to the crew. "Not till you opened your big trap, mate," replies Mitch.

The Dish is more character-driven than the other stuff we've seen from Working Dog Productions, but that's not to say the gags aren't there: one particular moment when the American Ambassador is greeted with a somewhat unexpected rendition of the US national anthem is priceless. Generally it works in the deflating Austalian style of treating important matters with as little respect as possible, best summed up in the scene where the team looking after the dish are discovered playing cricket inside it. Some lovely performances, notably from the reliable Sam Neill, and with a particular mention for Roy Billing as the Mayor of Parkes (who actually came along to the matinee screening to say hello, which is more than some people - yes, I'm looking at you, Caan - could be bothered doing). And with the help of some carefully selected archive footage, it manages to convey the sense of awe the world felt when those pictures were broadcast for the first time. A runaway hit in Australia at the moment, and hopefully set to be the same here. 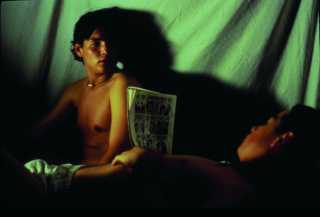 Consider the strange case of Spanish director Miguel Albaladejo. In 1998 - the year I started writing about the LFF for you lot - his film The First Year Of My Life played at the Festival, and struck me as a rather charming low-key comic gem. The following year, his second film Manolito Four Eyes was another Festival hit, with a strong sense of visual comedy and more simple straightforward fun that pretty much anything else I saw that year. Now we have his third feature Verbal Assault, and with reservations I'd say it's another fine movie. Three great films in three years: and as far as I'm aware, they've never been seen in the UK outside of the LFF, as nobody can be bothered to give this man British distribution. What's going on there, then? (Apart from our usual crapness at giving foreign cinema a decent crack of the whip, of course.)

Verbal Assault is a bit of a departure from Albaladejo's other two films. Written once again in collaboration with comic strip writer Elvira Lindo, it has a rigidly defined structure: seven short sketches (or "assaults"), each of which consists entirely of two people just talking. The opening sketch explicitly warns you of what's coming, as a couple (Sergi López and Antonia San Juan) discuss whether it's possible for people to be moved merely by the spoken word, or if other factors such as relationships and booze play their part when someone's touched by a sentence. The six sketches that follow appear to be unconnected - a man phones the water company to complain, a woman visits the man who's received her dead husband's liver in a transplant, two lesbians meet up again two years after a one-night stand, and so on - but gradually, tiny links emerge.

It's a very smart piece of writing, and the performances are all excellent: but after the freewheeling delights of Albaladejo's earlier ensemble pieces, it's a shame to see him tie himself down like this. There are some nice locations, but they don't get over the overall static feel of the piece. And although the tenuous links between the seven short scenes eventually reveal themselves in a quite subtle manner, I still don't see how the second one (the water board complaint) fits into the rest of the structure. Still, worth seeing (if you can), particularly for the hilarious liver donor section. 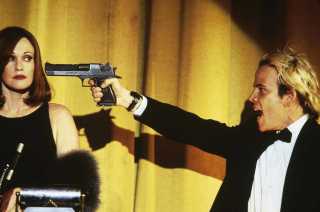 Hollywood star Holly Whitlock (Melanie Griffith) reluctantly attends a charity premiere of her latest film in Baltimore, only to be kidnapped by a group of underground cinema terrorists known as the Sprocket Holes. Their leader, Cecil B Demented (Stephen Dorff), plans to make a film that will publicise his campaign to rid the world of bad cinema. It'll document the real-life exploits of the Sprocket Holes as they destroy cinemas showing Patch Adams: The Director's Cut, and violently disrupt the shooting of the Forrest Gump sequel. And Cecil wants Holly to be his leading lady...

Much as I love the work of John Waters, even I have to admit that he can't really direct films. He can come up with a whole string of funny, sick and subversive ideas and hurl them at the screen, but he's never been able to put them together into a coherent piece of work. Once you accept that, your main criteria for judging a Waters movie are the quality and quantity of those funny, sick and subversive ideas: and on that score, this is his best film for some time. Sure, his targets are easy: but they're immensely satisfying to the sort of audience that naturally assumes that everyone who likes Forrest Gump is a fucking idiot. It's a joy to watch Cecil's crew as they terrorise a party of movie executives for making films based on TV shows and video games. "It's not my fault!" whimpers one terrified exec. "I don't even go to the movies!"

You don't go to a Waters film to watch finely nuanced performances, you go to see actors having fun: and Griffith and Dorff certainly do that in the lead roles, with fine support from assorted youngsters as the Sprocket Holes, and regulars Mink Stole and Ricki Lake making welcome cameos. And after a couple of slightly wimpy Waters movies, it's great to see him back on full-on offensive form again: none of the current gross-out movie makers could come up with the scene where the president of a heart charity dies of a cardiac arrest during the kidnapping, and the wheelchair-bound kid accompanying her on stage laughs himself silly. Simple test: at the start of this movie, we see a cinema marquee advertising Les Enfants Du Paradis: Finally Dubbed Into English! You laughed? Then this is the film for you.

Old Lag - Short, gentle comedy. Blue collar people instead of 'middle class' moral tale of rags to riches and then back again.