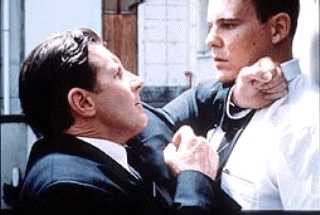 Eddie Fleming (Hugo Weaving) is woken up at five in the morning by the sound of some policemen kicking down his door and beating the crap out of him. Within the hour he's locked up in a police interview room, being interviewed by detective John Steele (Tony Martin) and his junior assistant Wayne Prior (Aaron Jeffery). It's a real Kafkaesque nightmare for Eddie: on the dole, unable to travel very far from his rented flat, he doesn't have any idea whatsoever why he's being detained, and initially the cops seem reluctant to tell him.

Slowly, over the length of an entire day spent in the confines of the interview room, Eddie starts to find out what the cops are looking for. They're searching for a stolen car, and have dragged in Eddie based on some flimsy evidence involving a couple of documents he's never seen before. But are they really interested in the car, or the whereabouts of the owner? Or the whereabouts of half a dozen other people who've recently gone missing? By the end of the day the truth will have been revealed. Maybe.

The Interview is Australian director Craig Monahan's first feature film. (Actually, I've just realised, all the movies I saw today were directorial debuts, and in each case the director was very keen to discuss the film with the audience afterwards.) A huge part of the film is basically three people talking to each other on a single set: initially it feels a little stagey, but as the interview becomes a battle of wits between Eddie and the cops (with the latter resorting to intimidation and threats to get their information) the tension mounts superbly. Monahan explained that it wouldn't work as a stage play, as some people have suggested: being able to make eye contact with the protagonists is a very important element of the film, as the audience tries to work out just who to believe.

The structure of the film is described by the director in the programme as "a continuous reveal... peeling back the layers of the onion, one by one." Thanks to some terrific acting by the three principals (particularly Hugo Weaving), we're cleverly left in the dark as much as they are, as they try to work out what's really happening. With such a structure, you kind of expect that there'll be some sort of huge revelation at the end, and the one flaw in the film is that it doesn't give you that dramatic release at the climax: although Monahan's explanation of that is that The Interview can be thought of as two entirely different movies depending on how you interpret the ambiguous final scene. 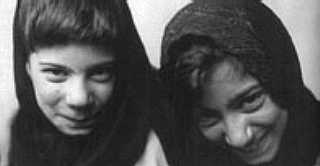 The Apple is the story of a family living in a run-down house in Tehran. Mother is blind, father's lazy: as a result, their twin daughters have never set foot out of the house in eleven years, as the parents find it easier to lock them up all day rather than supervise them out in the street. Father's justification for this is that women are like flowers - "if you put them in the sun, they fade away". Following publicity of their story in the media, a social worker decides to take action: she locks the parents in their house all day and allows the girls to go out. The film follows their tiny adventures during their first day in the outside world: blagging ice creams, playing with a boy dangling an apple on a string, meeting two other girls playing hopscotch.

I've managed to avoid Iranian cinema in the past, but the main selling point that keeps coming across in reviews tends to be the purity of their films. The Apple is a good example of this: a very simple story, shot without frills or gimmicks. It steadfastly refuses to demonise the parents for their decision, concentrating instead on the sheer joy of the two girls (Zahra and Massoumeh Naderi) as they discover a whole new world. They give a couple of totally natural and utterly charming performances with the aid of their director, the 18-year-old Samira Makhmalbaf (who had some help in the writing and editing from her father Mohsen Makhmalbaf, himself a renowned Iranian director).

It was only during the question and answer session afterwards that I started feeling twinges of doubt about this film. Not only is this a true story, but it also stars the real people involved: the Makhmalbafs saw a report on the TV when the girls first came to public attention, and immediately went to the family and asked them to participate in a fictionalised version of their story. It makes Samira's achievement in getting natural performances from all concerned even more impressive, but speaking as someone who studied Heisenberg's Uncertainty Principle for a physics degree, you wonder how much time a filmmaker can observe a situation like this before they start having some sort of effect on what they're observing. From the Q&A afterwards it would appear the effects have been mostly positive, but it seems rather a risk to intervene in a delicate family situation like this for the sake of a film. 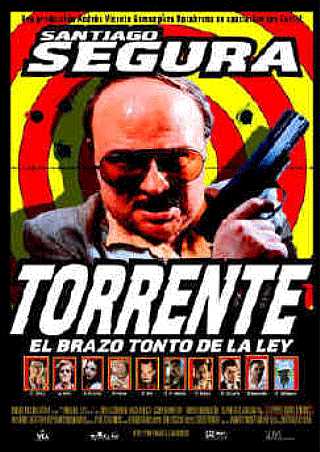 As Judge Nutmeg used to say to Vic Reeves, Torrente (Santiago Segura) is a terrible man, terrible man, terrible terrible terrible man. Once a cop, he now relies on his wheelchair-bound father to beg on the streets to pay for his booze and drugs habit. When he's shopping in a liquor store and a robbery suddenly breaks out, he takes immediate and swift action: he grabs four bottles off the shelves and runs off before anyone can see him. Things look set to change when a family of fishmongers moves in next door to him, and he takes a fancy to the niece Amparito (Neus Asensi). Will she be the redemption that he needs to get him back on the straight and narrow? Well, no, and thank Christ for that as it makes the film infinitely more funny.

In a subtle attempt to get into Amparito's knickers, Torrente strikes up a friendship with the nerdy son of the family, Rafi (Javier Camara), letting him play with his gun and accompany him on "stake-outs". During one of these, they accidentally stumble across a Chinese restaurant being used as a front for something more sinister by gangsters. Gathering together a band of Rafi's friends into some sort of posse, Torrente sees this case as the one that will get him back into the big time on the force again. Yeah. Right.

The Spanish have always loved offending as many people as possible with their comedies, from Luis Buñuel's attacks on the Church to Pedro Almodóvar's anti-Franco taboo-busters in the early eighties. Writer/director/star Santiago Segura tries to follow in that tradition, but even when Torrente is gleefully describing the Arabs as "like the French only dirtier", he doesn't have the real edge of nastiness that would make the character truly interesting. Despite the warning to the easily offended at the start of the screening, this film isn't as anti-PC as Segura likes to think it is.

Having said all that, it's still an extremely funny film, and Segura may have something when he tries to draw a link with There's Something About Mary, which became the hit of the year in the US about the same time that Torrente became the biggest grossing film ever in Spain: bad taste is universal, and there are enough big laughs in this movie to allow it to play pretty much anywhere. As well as that, there are a number of Spanish visual gags and celebrity cameos which went completely over my head, but had Segura's compatriots in the audience laughing their arses off. In connection with that, someone asked a question about Torrente's support for Athletico Madrid after the screening. "Torrente is an alcoholic, a racist, a misogynist, a homophobe and a fascist. Why doesn't he support Real Madrid?" (Segura tactfully passed over this with the reply, "I don't really want to get into politics here...")

A Kind Of Hush

Rob D - A film about sex abuse that's funny? I wouldn't have thought it possible until I saw this.  Basic story is about a bunch of lads, all of whom have been abused, hanging around King's Cross station looking like rent boys.  Each time one of them picks up a punter, they beat him up and rob him.  When not doing this they're hunting out their abusers and taking revenge, extracting confessions, etc.  Sounds pretty grim doesn't it, but the humour that runs through the film is amazing considering the subject matter, especially since it also has moments that almost had me in tears (and y'all know how rough and tough I am). Basically, the message is that this film shouldn't be avoided just because it sounds unpleasant, I enjoyed it enormously.

Ken - The latest film based on an Elmore Leonard novel, and although far more mainstream than (and hence not as quirky as) Jackie Brown or Get Shorty, in my mind it's the best so far. You can argue it's unrealistic for Jennifer Lopez's federal marshal to fall in love with George Clooney's jail-breaking bank robber just by being thrown together in a car boot with him: but don't do so in front of a George Clooney fan, and remember that practically every romantic movie works on a similar premise. Though it's not just romance: this film mixes in spadefulls of comedy and action too. Don't miss it. P.S.: an extra screening has been added to the Festival on Wednesday 18th at 3.45pm.

Ken - A truly extraordinary film. Extraordinarily bad, that is, made entirely with people who can't act (or "largely unprofessional actors" as the Film Festival brochure tactfully puts it). These people stood rigidly still and delivered their dialogue in monotone voices, as if they were reading the words for the first time without any concept of what they meant. Still, I suppose, every once in a while someone has to conduct an experiment to find out if it's really necessary to pay that money to professional actors. Give it a wide berth, it's too tragic to even be funny.

Ken - Set in a tiny Irish village where one of the community has won the Irish National Lottery, this sounds like an extended episode of the BBC's Ballykissangel - even the village bar is named Fitzgerald's. But it goes beyond that. The entire village ends up getting involved in a massive fraud reminiscent of Whisky Galore or Passport To Pimlico, and is as well-crafted and enjoyable as either. It also has one of the best opening sequences you'll ever hope to see. Highly recommended.