These are dark, troubling, paranoid times. Recent anthrax scares in the US have shown the dangers of covert chemical warfare. And understandably, we in the UK have been wondering: could it happen here? Could the next parcel we receive contain a lethal, invisible payload? I'd like to reassure the British public that they have nothing to fear. Because if ParcelForce have anything to do with its delivery, you'll never receive the fucking thing anyway.

This isn't a gratuitous rant, honestly: I'm trying to explain here why you're only going to get one review today, rather than the usual three or four. It's because I've spent the entire day at home waiting for two parcels to be delivered. One of them is a consignment of DVDs from Japan, which is in fact a replacement for a previous order that ParcelForce managed to lose completely. (Fair play to the retailer, CD Japan: when I asked them to contact ParcelForce about a claim for compensation for loss - the claim has to come from the sender, bizarrely - CD Japan just sent me a free replacement for the order, no questions asked.) That one turns up at quarter to four in the afternoon.

But the one I'm really waiting for is another set of DVDs, this time from Amazon in France. This one arrived in the country three weeks ago, and allegedly ParcelForce have tried to deliver it to Spank Towers several times, always unsuccessfully. However, they've never left any cards to say they've called: the first I knew of the parcel being in the UK was when I rang the ParcelForce office last week to see if it had arrived. After several more false starts, they agreed to deliver the parcel this morning: though subsequent phone calls reveal that 'morning' is their slang term for the period 8am to 5.30pm. When I call them again at 5.45 still parcelless, I'm told that the parcel had indeed gone out for delivery that morning, and has arrived back at the sorting office again without ever leaving the van. Would I be at home tomorrow for them to deliver it?

And that's why I was up at 1am this morning, constructing a picture of Postman Pat shagging a dog. Apologies for any distress caused, but at least it was some help for me. 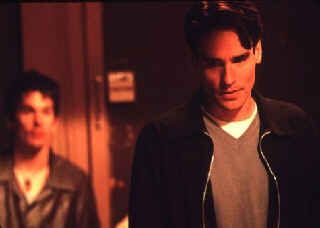 Thankfully, dinner at Quod [dead link] with The Belated Birthday Girl helps take the edge off the incandescent rage, and by nine in the evening I'm just about ready for my first and only movie of the day.

Two guys are meeting in a motel room. Vince (Ethan Hawke) is a total slob, a trainee fireman who makes most of his real money from selling drugs to his boss. John (Robert Sean Leonard) is a film director who's in town for a festival screening of his new movie. Fuelled by dope and beer, the conversation turns to their mutual friend Amy (Uma Thurman), who walked out on John in emotionally messy circumstances some ten years ago. And guess what? Vince's invited her over tonight...

Tape is pretty obviously adapted from a stage play: one look at that motel room in the first few seconds and you just know we're not going to leave it for the duration of the film. Stephen Belber's script also shows its theatrical origins in its somewhat stylised dialogue, with carefully spaced zingers every few minutes. (I particularly like Vince's description of John's films: "they're like whiskey, great for about ten minutes or so but then you really need to get a cup of coffee.")

But director Richard Linklater's achievement is to make this movie so utterly alive on screen that its restrictions are never an issue. It's carefully shot on digital video by Maryse Alberti: it avoids the 'surveillance camera' angles that can occasionally blight these things, and uses less camera movement with more cutting to keep the visuals dynamic without turning them into a pixillated smudgy mess. There's good use of closeups throughout to dramatically justify this being on film: sure, the dialogue would still come across on stage, but you wouldn't be able to examine these people the way you could here. Fine performances from all three leads and a zippy running time of 86 minutes make this a comic gem to treasure.

And apparently Linklater knocked this off during a brief production haitus on Waking Life (his other film at this year's LFF, showing tomorrow). I'm now incredibly keen to see what a movie he's actually spent time on looks like...

This Is My Chocky Message

SeaPea - Irritating little film though mercifully only 11 minutes long.  Story is about a child's growing awareness of the world.  Beautiful looking child with a rather distasteful runny nose.

The Cineaste - With this film I was in a similar situation to Spank yesterday, in that I didn’t know anything more about the film than what the LFF brochure’s single paragraph told me.


The film opens with a scene of the two protagonists together.  It’s a while before they speak, then the woman starts talking about her job.  Referring to one particular problem, she says “It’s as if reality freezes and morphs”.  Right, so we know that here we’re in cerebral, thought-provoking mode, rather than Pearl Harbor-garbage mode.

The film looks at a couple, and their inability to communicate with each other.  Tereza is going through quite a crisis:  her lack of confidence in her work (she works from home - what exactly she does, I wasn’t completely sure about until the very end of the film), her wish to have a child, amongst others. But really it’s not particular problems which make her unhappy, but her emotional state.  The film tries to convey this in her actions, and various situations she’s in.  She’s crouched in her bath, in a foetal position, playing childlike with the shower head.

Her partner Krystof is distracted by work problems, and is unable (unwilling?) to get through to Tereza and understand her.  Her condition worsens.

The film has many scenes which focus on the actions of people, without dialogue, creating mood, making inferences. Indeed it’s what’s not there, rather than what is.  The problem was that without explaining why, Tereza goes from having nothing more than the usual range of problems to being a complete emotional wreck.  She follows one or two courses of action which seem out of character.  And at the end of the film, which has jumped ahead a bit, she seems to have recovered.  There were obviously quite a few things unspecified in this film, but somehow this made it more intriguing, rather than detracting from it.  I came out wanting to see it all over again.  Star rating: three.

Off To The Revolution By 2CV

SeaPea - It has been called a gem and a gem it is.  A lovely film introduced by the director.  He told us to forget the world crisis for a couple of hours and I did.  Concerned three mates who, on hearing about the overthrow of the fascists in Portugal, decide to go there by 2CV.  A great story, great acting and fantastic photography.  Good soundtrack and score - I loved the film. Interesting how the woman in the trio had her own revolution during their journey.

The Cineaste - Yeah!  This was more like it.  A less than half full auditorium, and a cinema blessedly free of arrogant policies which prevent the consumption of huge mountains of all kinds of junk food you could possibly think of.
As for the film itself - wow! WWOOWW!!  The one short preview I’d seen of this film described it as a “freaky-deaky take on the Faustus myth”. Well, I’m shamed to admit, I’m not acquainted with this myth, so I can’t comment on that bit of it, but it certainly can be described as freaky-deaky (and a helluva lot more), in the sense that the Bible can be described as a book.
This film starts in a dramatic style around a railway station:  the credits roll, over some striking scenes of workers cleaning a train;  then we have some surreal shots of travellers going about their business in the main ticket hall area.  Dr Fausto is on his way to a convention.  And then things just happen: things illogical, unreal, surreal, and completely unexpected, and they just keep on happening throughout the film, right to the end.  An elderly lady in the train opposite him keeps on smiling at him.  Would he look after her luggage while she goes to the bathroom?  Needless to say, this doesn’t reach a normal, straightforward conclusion.  And also, inevitably, she crops up later in the film.  Dr Fausto starts to feel things and people are conspiring against him.
There are shades of Death in Venice, and some scenes straight out of the Bunuel manual of movie-making.  The film hangs together very impressively, and the interest level never lets up.  Even allowing for an unscheduled 30-minute interruption (a false fire alarm), which slightly broke the flow, I can’t reach any other conclusion than that this is an inspired, explosive, brilliant film.  One of the most original (if not the most original) of the year. Star rating: five.

SeaPea - Do not have the turkey dinner at BHS restaurant.
P.S. Was that really Nicole Kidman and Anne Bancroft sitting near me at the NFT on Wednesday!?