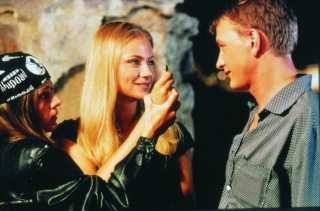 What's a Russian wedding like? Well, if this movie is anything to go by, it's rather similar to an Irish one, except the Irish would have got the fight out of the way earlier in the evening. Tanya (Maria Mironova) comes back to her village after several years away in Moscow working as a model. She meets up with her childhood sweetheart Mishka (Marat Basharov) in a bar, and within minutes the two of them are engaged on the strength of a decision made on the toss of a coin. The wedding day is an eventful one: apart from the expected singing, vodka and bad accordion playing, Mishka's best mate Garcoucha (Andrei Panine) steals a wedding gift for him, there's at least one arrest, and Tanya's former sugar daddy Borodine (Vladimir Simonov) makes an unwelcome appearance.

Pavel Lounguine's film is reasonably entertaining in a rough-edged kind of way. The frequent pauses in the story for drunken revelry and accordion playing bring to mind the work of Emir Kusturica. The political edge is more prevalent at the start of the story (where everyone's desperately waiting for the arrival of the wages lorry) than at the end, but it is there. And there's a nice hand-held feel to the photography that puts you right in the middle of the action without descending into wedding video cliches. But in the end, the comedy's probably a little too broad for Western audiences, particularly in its treatment of Garcoucha's behaviour. When he beats his wife, and later shags a wedding guest into not pressing charges for the robbery, they're treated as more wacky incidents from life's rich tapestry: and Lounguine really can't be allowed to get away with that.

As with previous years at the LFF, there's a definite feeling of winding down today. The commercial end of the Festival at the Odeon cinema isn't showing much new stuff: they tend to use the final day for last-minute repeats of this year's most popular movies. So if you're lumbered with a couple of cheap matinee vouchers that have got to be used up today, you're left with whatever's on offer at the National Film Theatre: which is why Jon and I ended up seeing The Wedding and this programme of short films from around the world.

In the five minute gap between the two, we discussed short films we'd known and loved in the past. We ended up with a formula for a memorable short: come up with one good idea, express it as quickly and economically as possible, and get the hell out. The main flaw with the shorts in this programme is that at an average length of ten minutes, they really aren't short enough: at least a couple of the works here outstay their welcome. Naomi Uman's Removed is a case in point, in that it works better as a one-line synopsis than as an actual film. ("Using a soft porn film from the 70s, nail polish and bleach, a new film is created – a short piece of pornography in which the woman is present only as a hole; an empty animated space.")

Still, some of them have a nice idea at the centre, even if it is over-extended. Black XXX-mas is a memorable blaxploitation version of Little Red Riding Hood, with the addition of a Black Santa who nicks your presents. There's a suitably slick and sick climax when the heroine Little Red is gorily extracted from the stomach of Wolfie the bent cop. Seven Coffees A Week is a gentle Spanish piece that brings to mind Verbal Assault from last week, as it consists of a series of seven linked conversations on the nature of love and troilism as overheard in a cafe. And The Last Real Cowboys amusingly features Billy Bob Thornton and Mickey Jones as cow-punchers going through an existential crisis.

Two shorts come closest to the ideal definition Jon and I came up with. Antony Mullins' Stop! is a neat little piece of strangeness featuring a businessman who comes across a stop sign in the middle of the desert, and can't work out how to get past it. And Jens Lien's Shut The Door has a similar air of surreal menace, as a recently orphaned man's flat is invaded by strangers because he forgot to shut the front door once. Jon groaned audibly when this one announced itself as a Cannes award-winner (he was badly scarred by Humanity last year), but Shut The Door turned out to be the best short in the set. 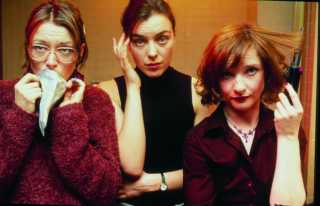 For one sphincter-looseningly terrifying moment, it was looking like The Low Down was going to be the only film at this year's LFF that attempted to look at life in London. Thankfully, the responsibility for representing the Festival's home city is no longer in the hands of a bunch of Camden wasters, thanks to the last-minute arrival of Born Romantic.

There's a lot going on here, but basically the film's about three couples. There's the incompetent thief Eddie (Jimi Mistry), who bumps into absentee grave-tender Jocelyn (Catherine McCormick) while escaping another botched job. There's the art restorer Eleanor (Olivia Williams) who's being pursued by the creepy easy-listening fan Frankie (Craig Ferguson). And there's the Scouser Fergus (David Morrissey), who's come to London to track down his jilted girlfriend Mo (Jane Horrocks) after eight years away. All these people have two things in common: they're regularly taken from one place to another by minicab driver Jimmy (Adrian Lester), and they all attend the same Salsa club for one reason or another.

Minicabs and Salsa dancing: as Sylvia pointed out, you can't get more London than that these days. And director David Kane (best known for another ensemble romantic comedy, This Year's Love) does make this city look rather lovely. Wonderland is still the definitive London movie if you want to see what it actually feels like at street level: this film uses nighttime photography and some stunning aerial shots to make the capital look a little more glamorous and exciting than it really is. But is that a problem?

Born Romantic does take a little time to warm up, after a sluggish start. But once you've settled into the rhythm of the interconnected stories, got to know these people and their screw-ups, and softened up enough to accept the rules of this particular romcom universe (like the way that there's apparently only one minicab driver covering the whole of London), it's got a great deal of charm going for it. The Eddie and Jocelyn romance is probably the most touching of the three, as two dysfunctional outsiders find that the only thing they have in common is how different they are from everyone else.

There are some great comic moments scattered throughout the movie: a lovely running gag where two taxi drivers (John Thomson and Ian Hart) discuss the mysteries of the opposite sex, and a terrifying demonstration of the dangers of making a Bloody Mary while in the nude. And the music is great enough to have you running out of the cinema straight into the arms of the cunning Salsa club people who were handing out fliers outside the Odeon. There's no way this could have matched up to last year's Closing Gala of American Beauty, but compared against most current British movies it's a delight.

Anna - My favourite film from the Festival. It had a shabby start, but then it unfolded: it became funny, romantic, quite dynamic because there were three stories in it. Of course it was an English film set in London, so it was easier to identify with it (East London as well, which made it closer to home for me), as opposed to the usual American films in surroundings we don't know. I really loved the music and the dancing.