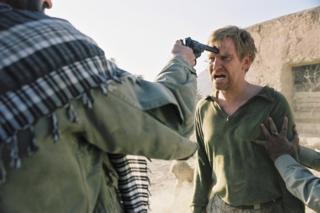 This year, my LFF starts with the new film from Danish director Susanne Bier, whose Open Hearts impressed me quite a bit two years ago. This one is about a pair of brothers who couldn't be more unlike each other. Michael (Ulrich Thomsen) is the one with it all: a beautiful wife Sarah (Connie Nielsen), two daughters, an impressive career in the army. Jannik (Nikolaj Lie Kaas) is the black sheep of the family: short-tempered, frequently drunk, just got out of jail following his part in a bank robbery. The family reunion dinner on the night of Jannik's release is one of those ultra-tense family gatherings that the Danes have done brilliantly ever since Hamlet. But just when we think we've got a handle on where this film is going, Bier pulls the same trick that she did on Open Hearts: hits the family with a sudden catastrophe which forces them to re-assess their relationships with each other. By the end, it will become apparent that the two brothers aren't as unlike each other as we first thought.

Brothers comes frustratingly close to brilliance, at least during its first hour or so. As with most directors who've worked under the Dogme rules, Bier has taken some of the Dogme approach into her subsequent work and ditched the rest. Even though this is a more conventionally assembled film, it's still notable for some extraordinarily fluid DV camerawork, courtesy of Morten Soborg. And it shares a similarly generous moral viewpoint with Open Hearts: as the opening explicitly states, nobody's good or bad, just trying to do the best they can in difficult circumstances. The performances are excellent throughout, with some lovely character development - Michael and Jannik's flaws are carefully foreshadowed by the behaviour of their parents.

There's so much good stuff in here, it feels wrong to be disappointed by the film overall. But to make the story work, Bier and her co-writer Andres Thomas Jensen have to push a couple of scenes into violently melodramatic territory. And those scenes sit very uncomfortably alongside the rest of the movie. The carefully understated tensions that build throughout the movie really don't prepare the audience for the sudden outbursts of shouting and guns. It points up how schematic the plotting is overall, as without those jarring scenes Bier couldn't justify the way the brothers effective swap characters during the course of the film. It's a shame, because this could have been great. Antenna have been doing this for two years now: getting the brightest and best people working in the field of music video, talking to them on stage about their work, and showing their best videos on a big screen at the National Film Theatre. For their birthday show, they've been given the prestige of a slot at the LFF. Three directors are on hand for tonight's discussion: the legendary Tim Pope, who's been doing this for twenty years or more, and young whippersnappers Dan Gordon and Si Atkinson. By virtue of his age and articulacy, Pope comes across as a peculiar uncle to the other two.

Strictly speaking, Dan Gordon shouldn't even be here at all, and he admits it himself. I saw his video for the Faithless song I Want More a few months ago, and was blown away by its sheer scale and ambition, as a cast of approximately ten thousand Korean gymnasts danced to the song. How did he do this? CGI duplication? Mass kidnappings from Korean stage schools? The explanation is a little more prosaic: Gordon's actually a documentary filmmaker by trade, and the video is made entirely from footage of his film A State Of Mind, which followed a couple of girls in training for the Korean Mass Games. Suzanne Bier was understandably proud that 10% of the population of Denmark went to see Brothers, but given the nature of state-sponsored television in Korea, Gordon can boast that one hundred per cent of the population there saw his earlier film, which allowed him the freedom he needed to make A State Of Mind. (This leads to a careless bit of questioning from interviewer Jordan - "It must have been great having access to all those Korean girls...")

In fact, in the early part of the programme, it becomes apparent that all three directors present prefer the just-do-it approach to endless mucking around with digital effects. Atkinson, working as part of the duo Si&Ad, made a lovely video for Chikinki (Like It Or Leave It) which shows the band members changing relative size from shot to shot - it's obviously all done in camera with simple perspective effects, and that's what makes it charming. Tim Pope's recent video for Fatboy Slim's Slash Dot Dash was hammered out in a frenetic eight-hour shoot, to keep the energy levels high. (And if you think that's impressive, we're also treated to a Bowie performance of I Can't Read, shot in five minutes in his dressing room with just a simple projection effect.) In discussion, it becomes apparent how the process of making videos has changed over the twenty years or so of Pope's career. He used to build relationships with bands like The Cure over several years, and he collaborated directly with them: nowadays, there are so many managers and commissioning agents to deal with, and so many videos being made, that they all tend to look roughly the same.

The final section of the evening moves away from the three featured directors to look at interesting new work from other people, and it's as patchily successful as any other short film programme you'd find in a film festival. Ramon and Pedro's video of Grand National's Drink To Move On has a single gag at its core - a race of people designed like Tetris blocks, and the horrific consequences of them bumping into each other - but it's a very good gag and cleverly executed. Jaron Albertin's film for Circlesquare's Seven Minutes is a creepily surreal highlight: a single-take zoom out and in on the face of a man in bed, it does what all the best videos should do by keeping you fascinated throughout, as you wait for a reveal that never really comes. But the best video is saved for last, as Coldcut remix their politician cut-up Revolution using miscellaneous soundbites from the US Presidential Election. (Eatmail have also made the video available for streaming - choose your format from the list on the right of this page and watch it for yourself.) The result is even less subtle than the British version released around the time of the last General Election, but there are at least half a dozen laugh-out-loud moments of malicious hilarity in its four minutes.

As a final treat, everyone at the event is invited to an after-show party on a boat moored nearby on the Thames. We have to give it a miss, though. Curse you for organising this on a school night, Antenna!

Maria Sharapova Fanclub - Having looked through Spank's final roll call of who is seeing what and when, I suddenly realised that I would have the honour and the privilege of opening the 2004 London Film Festival for Spank and his pals. All downhill from here then, or should that be all uphill, as my first two outings were hardly the auspicious start one might have hoped for.

Anyway things started badly for A Tout De Suite when the grinning NFT frontman pointed out that we wouldn't be having the expected 35mm print (being as it was stuck on a plane somewhere), but instead would have to make do with a digital betacam something or other (read not as good). To be fair it hardly mattered, as Caroline Champteir's black and white digital photography conjured up the hard grainy beauty of early 60's New Wave camerawork (ha, lifted that straight from the programme).

So yes it was in black and white. The point being this was some type of homage to those olde French boy, girl, and a gun crime capers that Froggy arty types used to discuss over Citanes and coffee into the early hours (not much on TV back then I suppose). What kept blowing the gaff in this case was the strange soundtrack such as Diana Ross' Theme From Mahogany (late Seventies) juxtaposed with background footage (early Fifties).

Anyway Isild Le Besco reprises the same dozy student type, on the run with criminal boy type, that she played in the vastly superior Roberto Succo. She (don't ask me to spell her name again) is undoubtedly a young actress of considerable presence, who although carrying the movie here, finds the movie unable to carry her. Thus she is one to look out for in the future, but don't expect to see this film doing much business on this side of the channel.

Maria Sharapova Fanclub - Gawd damn this was dreary. Don't let the smiling faces in this week's Time Out feature article fool you, because they don't crop up at any time in this movie.

Thus Naomi Watts, Mark Ruffalo, Laura Dern, and some other bloke with a beard are the neighbouring couples, who are all getting it on, one way or another, with their other halves next door. So you think that might bring a smile to at least one of their faces; huh not a bit of it. Instead all this pointless humping seems to achieve is a never ending post orgasm depression. Yes we are in the realm of middle America, middle class, mid-life adultery. However this sort of thing has been done so much better with style and humour in movies such as The Ice Storm, or Woody Allen's Hannah And Her Sisters or Husbands And Wives. In those films one actually cared about the characters. Here though all one can think is how did such smart kids end up with such spoilt selfish brats for parents.

In the barely audible Q&A afterwards, the director made a great play on how it took twenty years to make this film. Here's hoping it takes another twenty years before he gets to make another one.