The fabulously macho teenager Victor (Victor Rasuk) lives on the Lower East Side of New York with his sister Vicki (Krystal Rodriguez), his younger brother Nino (Silvestre Rasuk) and their tyrannical grandmother (Altagracia Guzman). Victor's trying to play down the recent scandal about him being seen out with the local fat bird, and in desperation he tries to cop off with poolside hottie Judy (Judy Marte). Amazingly, she says yes, though he doesn't realise that she's got her own reasons for becoming his girlfriend. One thing's for certain, though (all together now): After That Summer, Things Will Never Be The Same Again...

But I suspect that's the root of the problem: we've had one very good Hispanic coming-of-age movie in the LFF already this year, and this one seems surplus to requirements by comparison. Writer/director Peter Sollett contributes some nice little touches (like the 'you set me up with your sister and I'll set you up with mine' dealing that occurs at that age): but male coming-of-age movies are ten-a-penny, and this is too flimsy a confection to rise above the norm. After This Summer, Things Are Pretty Much Exactly The Way You'd Expect Them To Be. 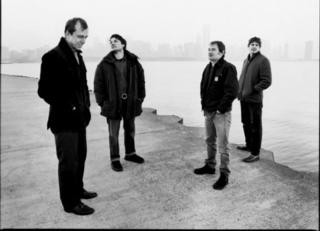 Shit! Depressed Irish Guy is, in fact, The Low-Fat Version Of Morrissey! I can't believe I've never noticed this before. Anyhoo, TLFVOM is introducing this film because he's a big fan of the band Wilco, the subject of Sam Jones' if-you-will rockumentary. I don't really know the band myself: the only experience I've had of them is through their work with Billy Bragg on his Woody Guthrie project, Mermaid Avenue.

For the first half, this film is pretty much a straightforward making-of documentary for Wilco's fourth album, Yankee Hotel Foxtrot. Their record company has given them more or less complete autonomy, and they've locked themselves in their own studio, happily layering all manner of textures and effects on top of their songs. We get interviews with the key band members, notably vocalist/songwriter Jeff Tweedy and multi-instrumentalist Jay Bennett, and see some of the slightly dull technical discussions they have at the mixing phase. Not to mention lots of footage of them rehearsing and recording the songs that would ultimately make it onto the album.

So far, so so-so. But then things get interesting. Wilco deliver the album to Reprise Records... and the suits don't like it. Suddenly, one of the most respected acts in American rock is being threatened to make changes to their music or risk being sacked from their label. And at the same time, internal tensions within the band are about to come to a head.

It's the second-half atmosphere of mounting apocalypse that makes I Am Trying To Break Your Heart a great music documentary, one of the rare few that are fascinating to watch whether you're a fan of the band concerned or not. Even when the personal relationships of the band members are stretched to breaking point, they still allow Jones the access he always had, and are splendidly frank about the problems they're trying to work through. The music is, indeed, rather fine - Reprise were idiots, no question - and it's gratifying to hear the final twist of the story that set Wilco back on track again. Hopefully this will get a cinema release over here, as it deserves one: Sam Jones shoots the whole thing beautifully in grainy black and white, and it deserves to be seen on a big screen rather than dumped straight to video. 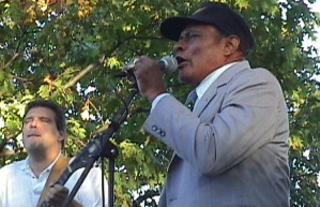 Shameful Blues Confession #1. When I first glanced at the writeup for this short film, I was convinced that it was about the life of Sammy Davis Jr. It seemed like a strange choice of support feature for a documentary on Muddy Waters (see below), but obviously film festival programmers have to take whatever they're given... In fact, the Little Sammy Davis who's the subject of Arlen Tarlofsky's documentary is a 72-year-old blues harp player who's still gigging today: as Tarlofsky said in his introduction, most films about the blues concentrate on long-dead players, and very few celebrate the artists who are still alive.

Shot on video, the film interviews Sammy at his home, catches him hanging out and reminiscing with friends at a diner, and includes quite a bit of footage of him performing with his band in New Jersey. Except that guitarist Fred Scribner would have you believe that it's his band. The rest of the 25 minute running time is taken up with a hysterically incoherent interview with Scribner, as he sits stoned in the back of his broken-down car blathering patronisingly about the blues as only a white man can. "Sammy's felt so much pain over the years... he's like a guy out of the Bible, you know? Animals come up to him and everything. They just fuckin' bite me." It's difficult to tell whether Scribner's deliberately being made to look ridiculous in this film, or whether it just turned out that way. Anyway, it's an entertaining short for various reasons, both right and wrong. 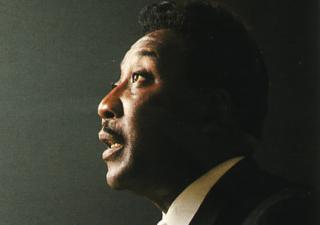 Shameful Blues Confession #2. The reason I own a Muddy Waters album - his terrific 1977 comeback, Hard Again - is because I really liked the song Mannish Boy when they used it in that Levi's advert a few years ago. I'm sure the various musos in the audience for this screening had much more authentic reasons for liking his music, but there you go. Anyway, my last film of LFF 2002 is yet another documentary, an hour-long study of Waters' life and work made for TV by Morgan Neville and Robert Gordon. It starts (as Waters did) in the plantations of the Mississippi, subsequently moving to Chicago and the global stardom which followed. By adding amplification and a huge backbeat to the old delta blues, Muddy paved the way for rock 'n' roll: but his influence wasn't really acknowledged until British bands like the Rolling Stones reworked his old tunes and brought them back to the States like coals to Newcastle. Whenever American fans asked Bill Wyman where they could hear this great music they were influenced by, he'd shrug and say "it's just over that river there".

An assortment of musicians and relatives are interviewed, and they discuss both the music and the personal aspects of Waters' life (his compulsive womanising being a favourite topic here). Unfortunately, we don't get much interview footage with the man himself - what little is included seems to have been drawn from a wide range of time periods, so we don't get much of a handle on Waters' character. But the music clips are all excellent, notably some great footage of Waters ripping up the 1961 Newport Jazz Festival. As it was covered for TV, we also get to hear the whitest music show host in the world as he announces "Muddy Waters tells us now about a charm that failed, as he performs Got My Mojo Working." I suspect that overall, this was more fun than the official Closing Gala, The Heart Of Me - I didn't really have any desire to see whether Helena Bonham-Carter's mojo was working or not, sorry.

The Cineaste - As Spank duly notes, when this film was screened last night, it was hugely popular.  And I was one of those queuing for returns.  Almost at the back of a lengthy queue, I wasn’t optimistic of getting a ticket, and indeed the queue didn’t start moving till almost the scheduled start-time.  But it gradually edged forward, until there were about 7 or 9 people in front of me, when the BFI lass announced “just one solitary ticket left”.  The couples declined its offer, leaving the one single bloke right in front of me to snap it up, so I was the first person (without the option of choosing) not to get a ticket.  As it was, this was probably a blessing in disguise, as it was now ten minutes after the start time, and I wouldn’t want to have missed any of the action.

This was amazing stuff, some of it genuinely (and intentionally) humorous.  It ended with a priceless cartoon featuring a character called Eveready Hardon - think Viz magazine but without the puerile silliness.  A must-see film for all of us pervs and deviants whose favourite film last year was Teenage Hooker...

Marie-Jo and Her Two Loves

The Cineaste - Over the last few years I’ve become quite a fan of Robert Guediguian (La Ville Est Tranquille, A l’Attaque, A La Place du Coeur), so I was looking forward to this one.  Set in his native Marseille, it promised more familiar ingredients - a visual feast of sun, sea, and luscious scenery.  And so it proved. However, I couldn’t help feeling just a slight sense of anti-climax watching this film.  After many near-full screenings over the last ten days, I was shocked to find the OWE almost empty.   The film itself was languorous and leisurely, a gently-paced look at a middle-aged couple.

Marie-Jo and Daniel seem a contentedly married couple, with a happy domestic life with their daughter Sylvie.  Daniel runs his own successful home and boat repair business, and Marie-Jo provides a taxi service for the local medical services. However Marie-Jo, although she does love her husband, also loves Marco, a coastguard pilot.  And we see the story developing as she tries to juggle with the two men, and wonders what to do, and what decisions to make.  It’s pleasant and grown-up, and the acting is very good.  There were leisurely shots of the family dining, many shots were outside in the fine sunny scenery, and it looked attractive.  However it was all a little bit too lethargic and tranquil, and basically with just the one plotline it was padded out too much.  There were snores nearby me, and at least two people walked out.  At over two hours the film was too long, and could have been shortened by 20 minutes or more without losing anything.  Which is all a bit of a shame, because I think Guediguian’s cinematography is impressive, and his understated mood is admirable.  He may have thought that the mood was too understated for too long, because to end the film we had a rather absurd and overly melodramatic denouement.  A moderately good film but unfortunately no better.