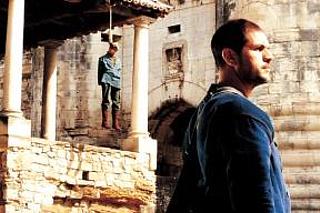 With three days of the Festival left to go, this is traditionally where it starts getting a bit strange. All the hot movies are generally programmed within the first week and a half, and the number of recognisable names involved between now and the end of the Festival becomes vanishingly small. It's the time when you need to take chances: to pick a film on the basis of one sentence in the programme and see where it takes you. The relevant sentence for Time Has Come goes like this: "[it] will either enchant you or have you tearing your hair out." That's probably a dangerous premise on which to select an afternoon's viewing, but bugger it, these matinee vouchers aren't going to spend themselves.

Time Has Come takes place in a strange middle European territory that seems to come entirely out of writer/director Alain Guiraudie's head. Rather like the community in yesterday's The Great Silence, the main growth industry appears to be bounty hunting: everyone's either a 'warrior', or a bandit, or someone being taken advantage of by either of the first two. One particular noble family has a daughter who's kidnapped so regularly, they've decided it's cheaper to hire a warrior to snatch her back every time rather than pay the ransom. Fogo Lompla (Eric Bougnon) is one of the best warriors in the business, but like most of them he's starting to have doubts about where his loyalties really lie.

The programme note tries hard to rationalise Alain Guiraudie's approach, and finds it easiest to conclude that he's some sort of nutcase. But he's not the sort of nutcase who yells repeatedly in your face: he's the quiet sort who gradually reveals that he has a library of several hundred notebooks, all filled with his tiny scrawly writing. The main delight of Time Has Come is seeing his mythical world being slowly revealed bit by bit - a place with its own unique foodstuffs, currency, and customs. Much of the dialogue in the early part of the film consists of stories being told about offscreen characters with increasingly baroque names - Radovan Remila Stoï, Soniéra Noubi-Datch, Morning Sapphire - and through these we start to understand the rules of the world Guiraudie has created. In that sense, it owes a lot to the gameplaying of early Peter Greenaway. Guiraudie's story doesn't so much end as fizzle to a halt, and the numerous nighttime scenes are so dark that the cinema exit lights blot out any visual information available: but on the whole, I'd veer more towards enchantment than hair-tearing. 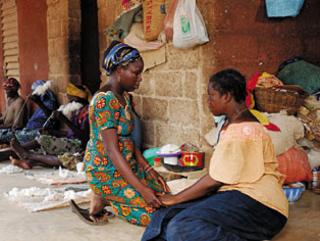 A small village in Burkina Faso is having a rough year: people are dying for no apparent reason. Town elder Diarrha (Celestin Zongo) sends his daughter Pougbila (Claire Ilboudo) away to get married against her will, in order to get her out of the way of the curse. With the death toll continuing to rise, there's only one possible explanation: witchcraft. Diarrha conducts a rite to track down the witch, and reveals that his own wife Napoko (Blandine Yameogo) is responsible for the village's curse. When Pougbila finds out her mother has been banished from the village, she heads off in search of the truth.

Like last year's Festival hit Moolaade, this is another film that takes a hard look at traditional African beliefs and questions their validity in the 21st century. S Pierre Yameogo's film is a little basic in its plotting and execution, but its broad melodramatic sweep is precisely what's needed to express his outrage at the way that women are treated in his country. (With one exception, every man in this film is stupid, lecherous, or just plain evil.) Its central visual motif is the journey of Pougbila, who has one of cinema's great walks - striding forward with tremendous purpose as she tracks down her mother, you can almost feel the Steadicam operator struggling to keep up with her. There are a couple of jarring choices in the music (notably some Western classical pieces to accompany the 'sad' bits), but apart from that this is a fascinating piece of work. 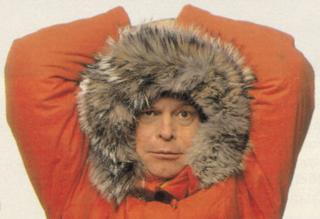 For the second year running, the LFF's onstage interviews are being run by main sponsor The Times rather than The Guardian. Thankfully, after the mess Wendy Ide made of last year's Kevin Bacon interview, they've decided to stop putting the paper's talent-free hacks in charge of the interviews, and given them to people who know what they're doing. Like Andrew Collins, who handles this discussion with Terry Gilliam very effectively indeed: although you suspect that Gilliam would make for an entertaining evening no matter who was putting the questions.

Initially, of course, the main topic of conversation is The Brothers Grimm, and Gilliam's well-documented battles with the Weinstein brothers to get his vision on screen. Notoriously, this sort of thing happens a lot with Gilliam, though he's prepared to admit it's more to do with his public whingeing about not getting his own way, rather than any actual problems. ("Which makes you officially English, then," suggests Collins.) With Grimm, the main difference was that rather than the producers conflicting with him after shooting, they were interfering at a hands-on level from day one of the shoot: most notably in an argument about a prosthetic bump on Matt Damon's nose that threatened to shut down the entire production. John Cleese has suggested that Gilliam is one of those people who needs to have an enemy to motivate him, but it sounds like the Weinsteins work in the same way - "they feed off other people's energy, like vampires," he suggests.

The rest of the talk is the usual chronological canter through Gilliam's career. He started work in comedy magazines, where shooting photo-comic strip stories gave him an initial grasp of the art of storytelling through pictures - and, coincidentally, introduced him to John Cleese, a meeting which ultimately led to his joining Monty Python. His first directing credit was shared with Terry Jones on Holy Grail, and he admits that at the time he had no social skills, which meant he ended up concentrating on the camera while Jones dealt with the actors. This is where Gilliam's reputation as a director of images rather than performances probably stems from, and he insists it's unjustified: actors like Jonathan Pryce, Brad Pitt and Johnny Depp have been the core of his best films over the years, but critics rarely even acknowledge their presence.

Even when he's discussing films I'm not particularly fond of, such as Fear And Loathing In Las Vegas, Gilliam is an engaging and enthusiastic interviewee. And I learned two Fear And Loathing-related facts I wasn't aware of before. One: it's been voted the most popular film at Eton. Two: if you suck hard on the barrel of a gun at the exact moment when you pull the trigger, it stops your brains from flying out the back of your head and leaves less of a mess. "Hunter Thompson: considerate to the end," chuckles Gilliam. 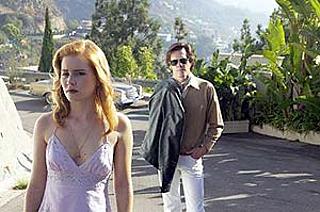 Lanny Morris (Kevin Bacon) and Vince Collins (Colin Firth) were a hugely popular comedy double act in the 1950s: fifteen years on, they no longer work together and refuse to talk to each other. Biographer Karen O'Connor (Alison Lohman) is commissioned to write a book on the duo, and obviously one of the key questions to be answered is why they split up. Collins is willing to be interviewed, but evasive: Morris isn't willing to talk at all, as he's already planning his own book. O'Connor sneaks her way into Morris' life under a fake identity, and slowly discovers how another writer eventually destroyed Lanny and Vince's partnership.

Where The Truth Lies is based on a novel by Rupert Holmes (whose previously best-known work, astonishingly enough, is The Pina Colada Song): but the writer/director who's taken on the job of bringing it to the screen is Atom Egoyan. The structure feels very much like what you'd expect from this director: multiple unreliable narrators, queasy switches in time between 1957 and 1972 and back again, a central mystery which stays unresolved until the very end of the movie. Egoyan's most recent films (notably the magnificent Ararat three years ago) have combined his narrative tricksiness with a genuine feel for character and ideas - his earlier work tended towards purely intellectual puzzle pictures. For all the mainstream gloss and star power of this film, it feels very much like a throwback to those earlier films of Egoyan's: we're less interested in the characters than we are in how all the pieces fit together.

But there's an enormous amount of pleasure in the puzzle. Both Bacon and Firth are excellent, pitching the complementary sides of their double act just right, and they're well supported by Lohman and the rest of the cast (amusingly, most of Egoyan's regular rep company - including his wife - are given a quick cameo in a publisher's meeting scene and are never seen again). The period is carefully evoked with good choices of source music: Mingus for the fifties, Mahavishnu for the seventies. And though it's easy to be distracted by the sex scenes which seem to be the only thing that American audiences (and the MPAA) notice about the film, they're just a key structural element in a much bigger picture. Where The Truth Lies isn't as obviously a highlight of LFF 2005 as Ararat was of LFF 2002, but it's still very good indeed.