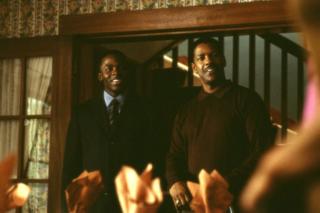 Written by Antwone Fisher and produced by Antwone Fisher, Antwone Fisher tells the true story of sailor Antwone Fisher (Derek Luke), whose progress through the US Navy is being hindered by his fondness for getting into fights. In desperation, the top brass send Fisher to psychiatrist Jerome Davenport (Denzel Washington), in an attempt to sort out his anger issues once and for all. Between them, the two men explore the history of childhood abuse that led Fisher to his current mental state. Though the simultaneous arrival on the scene of Fisher's first ever girlfriend Cheryl Smolley (Joy Bryant) suggests that if he'd just got laid a bit sooner, he could have saved both himself and us an awful lot of time.

Antwone Fisher is the sort of solidly dull project that actors typically take on when they want to direct for the first time - this is Denzel Washington's debut behind the camera. He handles the performances as reliably as you'd expect, notably the fine turn from newcomer Derek Luke in the lead. But it's unimpressive visually: Washington has lumbered himself with a Scope frame, and has real trouble most of the time finding things to fill it with. Also, Washington is so desperate to avoid hogging the camera himself, a key subplot (examining the breakdown in his own relationship) ends up petering out into nothing as he spends less and less time on it.

Ultimately the problem lies with Fisher's script, which is all very same old same old: from the flashbacks to his troubled childhood, to the huge collapse into sentimentality in the final reel, there's nothing here we haven't seen a million times before. Maybe it's the way that he's used his own name throughout the story that emphasises this, but you can't help feeling that all he's doing is asking for a cinema audience to watch him work through his therapy and pay for it. 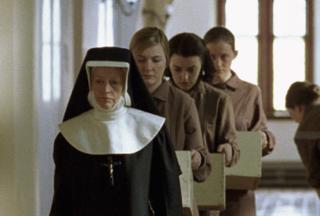 The Magdalene Laundries are one of the grubbier little secrets of Ireland's recent past. For myself, the first I heard about them was in a song called Magdalene Laundry released a few years ago by Mary Coughlan. At a time when Ireland had a mortal fear of female sexuality - okay, that's pretty much any time up until recently - unwed mothers were punished by being locked away in institutions run by the Magdalene Sisters, taking in washing to earn their keep. In Peter Mullan's Cannes award-winner, set in Dublin in the sixties, that's pretty much what happens to Rose (Dorothy Duffy): but girls were frequently sent to the Maggies for even more spurious reasons. Bernadette (Nora-Jane Noone) has been locked up in the same institution for just looking at boys funny, while Margaret (Anne-Marie Duff) is there for the heinous crime of getting herself raped by her cousin. The film follows the three girls as they struggle to cope with daily life under the iron rule of Sister Bridget (Geraldine McEwan), and try to find ways to escape.

The Magdalene Sisters isn't anything like the abortion (ha!) that Suze was claiming on Saturday, but it's something of a disappointment given the promise of Mullan's previous movie, the blackly comic Orphans. It's not very often I say something like this, but I think it's the level of emotional manipulation that's the problem here: there simply isn't enough. A film like this should leave an audience incandescent with rage at the treatment these girls receive, and it never really manages anything like that. At best you'll feel irritation at their plight, or pleasure in their occasional triumphs over The Man (er, Woman). The performances are all excellent, and there are a lot of lovely subtleties in the writing and direction (note the use in the opening scene of The Well Below The Valley, a charming-sounding Irish folk song that's actually about the burial of unwanted children) - but maybe subtlety wasn't what was called for here. It's a story that needs to be told, and it's good that it's finally out there for the world to see, but it could have been so much more. 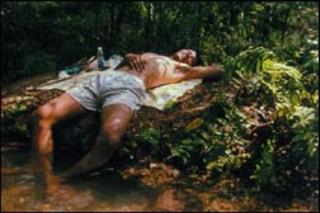 1. Go back over the last few days and count. Since Saturday, The Belated Birthday Girl and myself have been attending four LFF events a day, every day. That's rather a lot, and eventually the strain gets to you.
2. There was a three and a half hour gap between the end of The Magdalene Sisters and the start of Blissfully Yours. Given that this was the first major gap in our schedules since Friday evening, we were at a bit of a loss as to how to fill it.
3. The gap-filling solution we eventually settled on involved half a bottle of wine each plus a few beers.


4. I've seen some slow-moving Asian films this year - What Time Is It There? from Taiwan, All About Lily Chou-Chou from Japan - which demand that the audience slow themselves down and get used to the pace, which I generally don't mind doing. But Blissfully Yours by Thai director Apichatpong 'Joe' Weerasethakul has to be the slowest Asian film I've ever seen.

It follows the character of Min (Min Oo) as he takes his appalling skin condition and his girlfriend Roong (Kanokporn Tongaram) out to the countryside for an afternoon out. Their friend Orn (Jenjira Jansuda) is also there, for reasons which I can only assume were explained in the first 45 minutes. They eat a lot of fruit and do some shagging. And that's it. Really. No more.

To hell with Tony Rayns' "languid, real-time celebration of the pleasures of the moment" in the programme, this is fucking tedious. It's all shot in epically long takes in which hardly anything happens - the four-minute shot in which we watch Min's cock getting hard is the closest we come to an action highlight. The characters are ill-defined to the point of invisibility, and their dialogue is buried so far down in the mix that we can't get a grasp on them at all: which wouldn't be so bad if the film let you take some interest in the gorgeous scenery, which it rarely if ever allows you to do. Sometimes when you drift through a movie like this, unable to connect to anything, you wonder if it's just a problem with you: I certainly did. So the howls of derisive laughter that erupted from the audience when the end credits rolled may well be the most gratifying sound I've heard in a cinema all year.