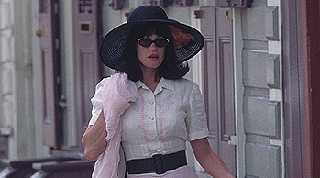 To paraphrase Christian Slater in True Romance: if I had to have sex with a man - you know, if my life depended on it - I'd have sex with Antonio Banderas. Search your feelings, guys, you know it to be true. So it was pretty interesting to hear that after acting in 51 movies, first in Spain and then in Hollywood, he was going to try directing one himself. Crazy In Alabama is the result.

Starring his missus Melanie Griffith as Lucille, the film's set in Alabama in the mid-sixties. Hopefully it's not a true reflection of the couple's home life, as by the time the opening credits start we learn that Lucille has killed her abusive husband and is carrying his head around in a Tupperware box. Dumping her kids on the nearest relatives, she takes off in her car to start a new life in Hollywood. Her funeral director brother Dove (David Morse) and her nephew Peejoe (Lucas Black) try to track her down, but with little success. In the meantime Peejoe is having problems of his own back home, coming into conflict with Sheriff John Doggett (Meatloaf Aday) over the killing of a black teenager during a race demonstration.

The two stories do come together fairly late in the film, but don't mix terribly well. You can imagine why Banderas was interested in the challenge of trying to combine a screwball woman-on-the-run comedy with a civil rights drama, as his former mentor Pedro Almodovar takes on that sort of challenge all the time: Banderas, unfortunately, isn't quite good enough yet to be able to pull off the sudden gear changes smoothly. But as a first directorial effort, there's a lot of promise on display. There are some lovely funny scenes as Lucille does everything necessary to get to her Hollywood job, and some beautifully dark humour comes out of the way she does all this while carrying around a severed head in her hatbox.

This is Melanie Griffith's best role in ages, and the supporting performances back her up just fine: they include a scene-stealing piece of pure ham from Rod Steiger as the judge, and a suitably evil turn from Mr Aday (formerly Mr Loaf) as the sheriff. There are a couple of misjudged moments: the depiction of sixties racism is a little too Disneyfied to be believable, and there's an appearance by Martin Luther King in which he's filmed in the iconographic, faceless style they used to depict Christ in fifties Biblical epics. But other than that, a good solid commerical piece of work that bodes well for its director's future. A Feinnes family affair - starring Ralph in the title role, directed by his sister Martha, and featuring music by Magnus - Onegin is based on Pushkin's classic verse novel Evgeny Onegin. The title character inherits a country house and estate from his uncle: as a St Petersburg man-about-town and serial philanderer, the prospect of being stuck out in the country fills him with dread. That is, until he meets his neighbour Vladimir Ledsky (Toby Stephens) and, more importantly, Ledsky's fiancee's sister Tatyana (Liv Tyler). This being Russian literature, their relationship is, naturally, doomed.

By the end of Onegin there's a truly tragic sense of the way human lives can be destroyed by a couple of tiny mistakes. But it takes a hell of a long time to get there. For the first hour or so this is a costume drama so generic, it could be sold in supermarkets in white labelled tins with Costume Drama written in blue Courier type across the front. It all looks very pretty, but you couldn't give a damn about these people and their inability to come to a sensible decision on anything. But the movie picks up considerably in the second half as events conspire to bring about the tragic conclusion. Feinnes broods as only Feinnes can, and Tyler puts in a well thought out performance that doesn't just rely on the fact that you could look at her face all day: the final confrontation between the two is superb. A slow starter, but worth the effort. 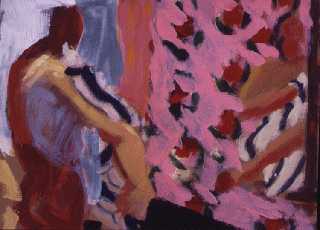 Regular readers will know that I usually try to see one programme of animated shorts per Festival, be it Edinburgh or London. It's one of the few film genres that allows you to experiment wildly without the risk of losing your audience completely: tolerance for surreal, non-narrative, non-representative film is much higher when it's animated than it is for the equivalent in live action. This year, however, the International Animation programme seems more mainstream than usual.

This year's second collection of shorts (I couldn't find time to see the first one) has a couple of non-narrative abstract pieces, notably Bärbel Neubauer's Firehouse, a series of patterns painted directly onto film like Norman McLaren used to do fifty years ago. And Alison Hempstock's Bath (pictured here) is a simple study of bathtime painted in hugely broad brushstrokes, inspired by the painter Pierre Bonard. But aside from them, the rest of the shorts on display here are comic to one degree or another, with a reliance on Funny Animals that's surprising for a serious Festival programme - not that I'm complaining, mind.

So Sarah Roper's The Apartment Cat depicts the adventures of the eponymous feline as it tries to get to the birds nesting on the roof of the apartment block over the road: while When The Day Breaks by Wendy Tilby and Amanda Forbis conjures up an entire city of animals and follows the connections spreading out from a road accident. And One Day A Man Bought A House by the Norwegian Pjotr Sapegin shows how a rat falls in love with the owner of the house, touched by the presents of rat poison and steel traps that he keeps leaving for her.

The two highlights of the programme take a simple idea and push it as far as it can go. Oscar Grillo's Monsieur Pett is filmed in the heavily stylised vein of UPA's cartoons in the fifties, taking a typical Mr Magoo scenario but making the central character a compulsive farter who lets rip in social situations to his increasing embarrassment. At The End Of The World by Konstantin Bronzit is set in a house balanced precariously at the top of a perfectly triangular hill, and shows the geometric chaos that ensues as people and - yes! - animals pass through it during a typical day. All in all, a well-balanced, highly enjoyable 80 minutes of animation: congratulations to animation programmer Jayne Pilling, and to the crack projection team who had to juggle with 16mm, 35mm and video footage in a single programme. 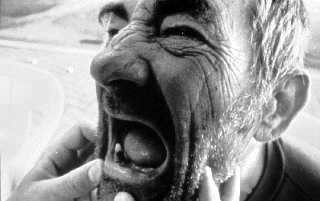 8.45pm: The Four Seasons Of Espigoule

Fake documentaries are the in thing these days, The Blair Witch Project being the most conspicuous success. It's easy to see why: shooting on the fly with a minimal crew reduces your overheads dramatically, and any technical goofs that ensue can retained to give the film an air of added realism. Generally the constraints of working inside a fake version of reality makes things a lot easier for the filmmaker. Christian Philibert, however, seems to have just made things complicated for himself with this movie.

Philibert's intention was to create an idealised version of the village where he grew up. To do this, he spent a number of years in his home town making short documentaries with his friends and neighbours. As they got more used to the camera, Philibert started asking them to act up for it a little more, until ending up with the footage that makes up The Four Seasons Of Espigoule: a combination of pure verite footage and staged improvised material, all performed by a cast of non-professionals.

The resulting film feels quite unlike anything you've ever seen. The realistic documentary feel is scrupulously maintained throughout, but married to a series of surreal characters and situations. We follow the main social events of the town throughout the year: a jugged hare contest, a New Year's fancy dress party, a goat festival ("I wasn't expecting it to be this violent" says one spectator). Elections are held, people get married, football is watched. And through all this wanders the chilling spectre of a badger as tall as a man with a white moustache.

Ken - I'm not a big fan of short films (as any of you who've read my review of Souko will already know) but the nine separate tales that make up this film are real gems. How do they pack nine films into a ninety minute feature? Well for one thing the first of these stories (Mr Cool) ends before the opening credits. Mr Cool pretty much just leads up to a single sight gag, but it introduces the subject matter of tube trains. This film was the result of a competition in Time Out inviting the general public to send in their stories of tube travel. The final nine were selected from over 3,000 entries. If that wasn't experimental enough, the initial plan was to use first-time directors for each of the shorts. That plan was later modified, but three of the directors (including Jude Law and Ewan MrGregor) had never directed before and only two of the directors (including Bob Hoskins) have directed feature films. This is the first film to be produced by Sky Pictures, and not surprisingly the LFF was probably your only chance to see it at the cinema as it gets its TV release on Sky Premier on Friday. I don't suppose Sky are too worried about what certificate the film should get, but it's interesting to note that most of the tales could almost pass as PG (before you start complaining about bad language and drugs I said almost) with one notable exception. Horny stars Denise Van Outen who not so much flirts with fellow traveller Tom Bell, but (without getting physical) sexually harasses him. I suppose it's supposed to balance the behaviour of Mr Cool. There are two high points: My Father, The Liar directed by Bob Hoskins and starring Ray Winstone, and the grand finale Steal Away. If you subscribe to Sky's movie channels, set your video now.