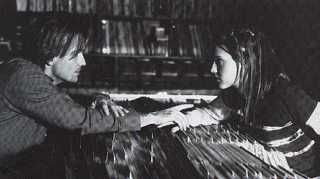 If nothing else, Girl has a terrific opening shot: a track down a street in Portland, Oregon where every single house has a garage and every single garage has a grunge band rehearsing in it. Andrea Marr (Dominique Swain) lives in a slightly posher part of town than this, and casts scorn on her schoolfriends who hang around loser bands like these and end up becoming total groupies. Bet you can't guess where the story goes from there.

Andrea's in her last term at school, with a place at Brown University assured in the autumn, and she's regularly out on the prowl with her best pal Darcy (Selma Blair) to try and get the dull task of losing her virginity out of the way before she leaves. Eventually she finds a suitable candidate for the job on the dance floor (literally - they first meet lying on the floor to avoid the crush at a gig). Unfortunately for Andrea, she ends up being heavily smitten with one of the performers playing that night, Todd Sparrow (Sean Patrick Flanery). She dumps Darcy, gets some new schoolfriends who are more heavily involved in the local music scene, and devotes all her time to chasing Todd.

Girl doesn't really do anything we haven't seen before in TV shows like My So-Called Life, but it does have some good things going for it. Andrea's narration is sharply ironic for the most part, continually emphasising her thoughtful and considered approach to life before we invariably see her dive into a situation with both feet. Dominique Swain finally gets herself at the top of the credits after roles in Face/Off and Lolita, and she's delightful in the title role. Her assorted schoolfriends are enjoyable to watch as well, particularly Tara Reid as Cybil, the band leader that Andrea adopts as a role model in her new musical life. But as with most American comedies these days, ultimately Girl falls into the trap of stopping all the laughs 20 minutes from the end so that one of her friends can commit suicide and everyone can have a Learning Experience. Bleah. 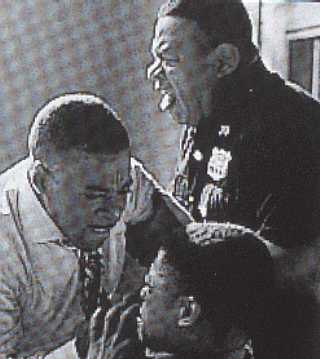 Blind Faith is directed by Ernest Dickerson, who is probably best known for being the director of photography on Spike Lee's first half dozen films, although since the early 90s he's been working as a director in his own right. Considering the high visual style associated with Dickerson, it's a bit of a surprise that Blind Faith is visually rather flat and uninteresting: granted it was made for Showtime Cable, so its ultimate home would be a TV screen, but it's still a little disappointing to look at. Having said that, for the most part it's a courtroom drama, and it has all the necessary elements required: a knotty moral situation, a tight script which slowly unravels it, and a fine cast of actors to do the job.

Blind Faith is set in New York in the fifties and follows the story of three black brothers. Charles Williams (Charles S. Dutton) is a cop looking to become New York's first black sergeant: his brother John (Courtney B. Vance) is a criminal lawyer looking for the big break that will get him away from the petty cases he works on every day. The black sheep of the family is Eddie (Kadeem Hardison), a jazz saxophonist who's been barred from Charles' house for lighting up a reefer while he was there.

Charles is happily married to Carol (Lonette McKee), and the family life they share seems idyllic compared with the single existences of John and Eddie. Until the day that Charles' son Charlie Jr. (Garland Whitt) is arrested and confesses to murdering a white boy with his bare hands. John sees how badly beaten Charlie is and suspects something is up: he recruits a team from the local law school and acts as Charlie's defence attorney.

John struggles to find the truth about what happened the night of the murder: but people refuse to talk to him, evidence is being suppressed, and Charlie continues to insist he is guilty. The one witness he finds gives an account which simply doesn't square with the established facts at all, and he's forced to persuade her to lie in court to give him at least some sort of case to work with. Far too late, John discovers that there's a bigger picture that he wasn't previously aware of.

Blind Faith is a classic courtroom drama of the old school, carefully revealing its plot to maximum effect. We're made aware of the dramatic revelations during John's investigations, rather than them being used for cheap shock effect in the courtroom itself. Some tough questions about loyalty to your family are raised as a result, and though the film comes up with no firm answers, the debate is electrifying to watch. It's a shame that there were only 30-40 people in NFT1 for this matinee screening: Blind Faith isn't a movie that will change the world, but it deserves a better audience than that. 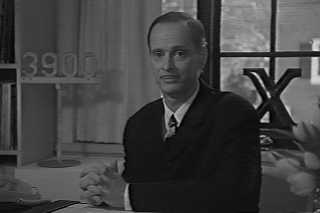 John Waters interviewed on stage by Jonathan Ross. Two of the fastest mouths in the west swapping funny lines. There's a temptation to avoid any sort of analysis of the event and just quote all the best gags. And if John Waters films have taught me anything, it's that yielding to temptation can only be a good thing.

John Waters: Underground cinema in the 60s was a big influence. Warhol was particularly great, because he had the brilliant idea of finally putting gays and drugs together in the same movie.

JW: I liked watching audiences watching Polyester [Waters' experiment in Odorama, where you got to scratch and sniff a card at selected points in the film to get smells related to the image on screen]. I loved the way they'd see somebody fart on screen, they'd get the instruction to scratch and sniff, and they'd still do it!

JW: I've shown Pink Flamingos at children's birthday parties and they love it. I mean, babies eat shit all the time, don't they? They just think Divine's a great big funny clown.
JR: That is so fucking wrong.

JW: Liz Renay [star of Desperate Living] wrote a book called How To Attract Men. Her main advice is to be naked and have a bar by your bed.

JW: I've tried pitching Pink Flamingos to the TV networks as a children's cartoon series. Sure, you'd have to tone it down a bit, but it would work, wouldn't it?
JR: That is so fucking wrong.

JW: [on the BBFC] There's nothing more dangerous than a smart censor.

JW: Teabagging's very popular after Pecker, but the one I really wanted to include was 'helicoptering'. It's when you slap someone repeatedly in the face with your erection.

JW: [on Pecker] We couldn't get the rats to have sex on camera, so we just put them on top of each other and had a handler put his hand underneath them and move them up and down. I was watching this on a video monitor and doing the voices for the rats - 'Fuck me! Fuck me, big boy!' - and I turned around and the rat handler's seven year old daughter was there watching me.

There's loads more of this stuff, and I'm only quoting from a memory sadly corrupted by four pints of Young's bitter after the event. Check out the excellent LFF official site for a full transcript [dead link]. (Oh, and I suppose you can look at the half dozen reviews of mine that they've published while you're there.)

Rob D - The plot (if you can call it that) of Among Giants is about a bunch of unemployed men from Sheffield who are painting a load of electricity pylons.  A couple of them run into an Australian girl rock climber who joins them in the painting and then falls in love with one of them.  The relationship doesn't work out and she gets the hell out of Sheffield (as any sensible person would!) I reckon this was trying to be another Full Monty but it doesn't succeed. The underlying theme seems to be that gruff northerners can be human too.  I gave the film two stars on the voting card for completely the wrong reasons - the Australian girl is VERY nice and she takes her clothes off twice (sorry).

Ken - Clearly her previous cinematic outing as Lolita didn't do Dominique Swain any harm, since this film starts with her as an eighteen year old virgin. Despite being on her way to an Ivy League college, she becomes a totally obsessed groupie to a young rock star. Somehow the film's blend of humour, music and teenage identity angst works.

Ken - A very weird black comedy from the John Waters stable. The title is the name of the lead character (played by Edward Furlong), not part of his anatomy. He is the proud possessor of a camera clearly manufactured by the same people who make six-shooters for bad Westerns, in that he can continually take photographs with it without ever being seen to reload. The photographs are of his seriously weird relatives and neighbours in Baltimore, whose lives are upset by becoming famous when he hits the big time with the New York art world. Christina Ricci makes her third appearance in the Festival as his cleaning-obsessed launderette manager girlfriend. Enormous fun.

A Rather English Marriage

Ken - A gentle comedy drama for BBC's Screen Two. Based on the suggestion of their social worker, two elderly men move in together after the death of their wives. Albert Finney is a hard-drinking, womanising World War Two squadron leader whose wife was rich, but her family got the money. Tom Courtenay is a shy retired milkman who's the only one of the two who can cook and is treated like a servant by Finney. Joanna Lumley is the gold-digging love interest of Finney. Needless to say, with that cast list, it is well performed with excellent characterisations, and the script includes plenty of humour and pathos. It won't be getting a cinema release in this country, but look for it on BBC2 this Christmas.

Two Girls And A Guy

Ken - The two girls meet outside a New York apartment building, and are shocked to discover that they are both waiting to surprise the same guy (Robert Downey Jr, apparently filmed between clinic and court appearances). It turns out he's really going to get a surprise, when they break into his flat to lie in wait for him. After the initial confrontation with him, the film becomes increasingly implausible, as his various attempts to explain himself are shot down, yet they fail either to storm off or kill him. The film has a very theatrical feel to it, being set entirely within the apartment: but the writer/director claimed at the screening that it was written as a movie.