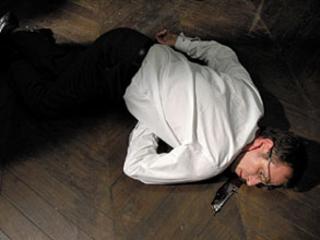 Things just used to be more fun back in the sixties, thinks Georges Figon (Charles Berling) as he lies dead on his apartment floor. The politicians were more entertaining, the music was groovier, and small-time crooks like him could get involved in all manner of stuff. Back then, Figon had contacts within the Left Bank intellectual set, people like writer Marguerite Duras (Josiane Balasko) and director Georges Franju (Jean-Pierre Leaud), and was making no end of dodgy movie deals involving them. One day, he's approached with a proposal for a political film on the hot topic of decolonisation, focussing on the revolutionary changes taking place in the Third World at that time. Best of all, the deal includes the services of Medhi Ben Barka (Simon Abkarian), the charismatic Moroccan activist, as a political adviser to the film. All too late, it becomes apparent to Figon that there's more going on here than just moviemaking.

Serge le Peron's movie is based on a real-life French political scandal, and it's possible I might have enjoyed it more if I'd been better acquainted with the facts of the case. It's not that the film appears to play fast and loose with those facts - if anything, it's possibly a little too reverential with la vérité, restricting itself to information that was used in evidence at the subsequent trial, and refusing to speculate on the bits nobody really knows about. As a result, there are possibly a few too many holes in the story for a newcomer to be comfortable with, and a tricksy back-and-forth plot structure doesn't really help either.

There are undeniable pleasures in Ben Barka, though. The Paris mid-60s period is splendidly evoked through archive footage and a funky jazz score. Charles Berling is as watchable as ever in the lead, although he's generally as much in the dark as we are as to what's going on. But it's Balasko and Leaud who steal the show, providing the odd pleasurable frisson for fans of French cinema of that period. Maybe there's a market for a franchise where Marguerite Duras and Georges Franju work as a crime-solving partnership. 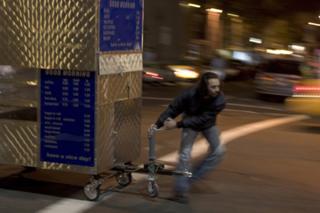 This was a last-minute change to my plans - originally I'd hoped to go from Ben Barka to the documentary New York Doll, but found out on the day that I'd only left myself ten minutes to get from the National Film Theatre to the Odeon West End. (Explanatory note for non-Londoners: no, you can't.) So I ended up joining The Belated Birthday Girl for Man Push Cart instead, and it turned out to be one of the best films I've seen so far this Festival. Funny how these things pan out.

Ramin Bahrani's film tells the story of Ahmad (Ahmad Razvi), a young Pakistani man living in New York. He makes ends meet by working on a mobile doughnut stall by day, selling porno DVDs by night, and taking any odd jobs he can find in between. He doesn't have many friends, but in the course of the film we watch his developing relationships with Pakistani customer Mohammad (Charles Daniel Sandoval) and Noemi (Leticia Dolera), the Spanish girl who's taken over a nearby newsstand. Both of them become obsessed with Ahmad's former life as a singer in Pakistan: but Ahmad would rather concentrate on the future than the past.

Sandra Hebron introduced this film herself, which was interesting: as boss of the LFF, she generally only comes out for the all-star gala screenings. Her presence emphasises the point she made in her intro, saying that this is the sort of low-key humanist drama that she'd love to be typical of the Festival. That would be fine by me, as Bahrani's film is a wee gem: a careful study of character with a rock-solid sense of place. The character comes from a series of excellent performances, particularly by the non-professional Ahmad Razvi in the lead: the sense of place comes from the well-chosen New York locations, beautifully shot by Michael Simmonds.

There are so many ways that a story like this could fail, particularly in the cliched options open to a plot involving a Pakistani in New York in the 21st century. Bahrani is careful to almost entirely avoid those cliches, preferring to trust in his central image: Ahmad on the busy streets of New York at four in the morning, pushing his doughnut cart along to work like a modern day Sisyphus with no end in sight. The story doesn't end conclusively, but does reach a kind of emotional resolution while leaving the fates of the characters wide open: and that's exactly right for the sort of film this is. If you get the chance, see it. 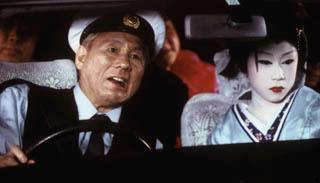 Ever seen a film made by someone with brain damage? I have, and it's not as much fun as you may think. The film was Getting Any?, made by Takeshi Kitano in 1994 shortly after his near-fatal motorcycle accident. He admits to this day that he was still recovering at the time, and to be honest it shows in the film: an incredibly broad sex comedy, it's a shambolic structureless mess with terrible jokes that just die there on the screen. After one screening at the LFF that year, it ended up being the only film of Takeshi's to go straight to video in the UK, and even then it didn't get a release till 2004.

Till now, I've always assumed that the uselessness of Getting Any? could be explained away by Takeshi's ill-health at the time of its making. But his new film, Takeshis', leads me to suspect that even with a fully functioning cerebellum, this is what his pure comedy films will always look like. The lead character of the movie is Takeshi himself, the movie and TV star with an army of sycophants working for him and an endless schedule of appearances to make. During the filming of a TV show, Takeshi comes into contact with a struggling actor who looks almost identical to him, and the film also follows his day-to-day life of failed auditions and ridicule from his neighbours. Although the actor might actually be a fantasy figure in the mind of a convenience store assistant who also looks the same as him. Or it may be the other way round. It's hard to tell.

And it's hard to care, frankly. There are some lovely ideas here near the start about multiple identities and possibilities, explored with Takeshi's usual considered approach to editing. And I think that somewhere in this film there's a point where, if it had just stopped, it could be considered as a fun little post-modern romp through the various aspects of Takeshi's stardom. But whereever that point is in the film, it carries on running way beyond that, destroying any good will you may have had towards it with each passing minute. By the end you're physically willing it to stop, as it takes each original idea that the film has had and pummels it to death in an over-extended climax. Of course Takeshi can do comedy - there are individual moments in his dramatic films that are pricelessly funny. But if you're looking for him to be funny for a sustained period of time, you'd be better off with any individual episode of his Takeshi's Castle gameshow than this mess.

The Cineaste - Laurent Cantet’s film is a slow-burning little number looking at sex tourism in Haiti. Apparently it’s been a bit of a hit on the festival circuit this year.

Charlotte Rampling gives a strong performance as Ellen, one of a number of forty- and fifty-somethings who’ve been coming to Haiti for numerous summers to enjoy the pleasures of the young male population. These women all know each other well and form a friendly group. Then one summer Brenda (Karen Young) arrives, and gradually Ellen’s preferred interest Legba (Menothy Cesar) takes more of an interest in her than in Ellen. With the steady dynamic of the group disrupted, the status quo is disturbed and Things Will Never Be The Same Again.

Only it takes a long while for this to happen, because for a long time at the beginning of the film we see leisurely, languorous shots which set the scene - eating, lazing about by the pool, swimming in the sea. Plus plenty of scenes of beautiful, sun-drenched scenery. And it didn’t really seem to be going anywhere.

Where was it supposed to be going? The film didn’t really do much. In the review we’re told about the simmering political tension (and how it plays a major part in the socio-economic climate of the island), yet this hardly got referenced at all. [I’ve noticed in the LFF programme “reference” appears to be Hebron’s buzzword this year.] It must have taken fully an hour before the first politically-influenced action arrived on the screen, and then after this it formed the most minimal subplot.

And then, most unexpectedly – the end. The programme notes gave a running time of 135 minutes, which must have been an overestimate by about 30. Because I was just starting to think, well the political action will no doubt get ratcheted up in this last part of the film, but it didn’t get a chance, because the end came instead.

A gently-paced effort, but the subject matter wasn’t really sufficient on its own to carry the film and make a decent storyline.

The Belated Birthday Girl - In the run-up to the London Film Festival, one of the things I have got into the habit of doing is looking at the programmes of other festivals to see what might turn up at London. When the London programme was announced, I was most disappointed that the Miike Takashi film The Great Yokai War, which had been shown at both Toronto and Venice, wasn't included, but was very pleased that Kitano's new one, Takeshis', was. On paper, it sounded good fun, with Beat Takeshi playing two versions of himself: one the film actor we all know, and the other a convenience store worker. Once it had been seen by people at Venice and Toronto, I started hearing not-so-good things about it, but I was still hoping that the nay-sayers were all wrong. Sadly, they weren't, and this has turned out to be the biggest disappointment of the festival so far (apart from there being no Miike, that is). It starts out promisingly enough, and there are some good laughs at the expense of Kitano's usual screen roles and the image of Beat Takeshi, movie-star, but as the layers of unreality build, and it becomes obvious that there is no solid reality underneath it all, it just becomes one long over-extended Lynchian dream-sequence, and not a particularly well done one at that.