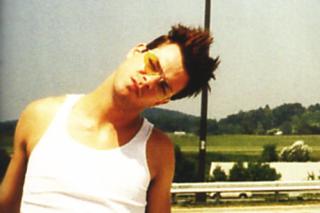 Bugger. With some films, it's extremely difficult to get a handle on what you think about them as you leave the cinema. My opinions of Tarnation have probably been made even more confused by a simple coincidence: it was just as I was leaving the cinema after the film that I found out that John Peel died this morning. I was a teenager during the punk years when his influence was at its absolute peak, as he brought the thrills of punk rock to those of us too young to get out to gigs. He was a major fixture of my adolescence, and way beyond that, and the world will be a much sadder and quieter place for his passing.

It's relevant to the film, because Tarnation does make you think about your formative years, mainly because you can't help comparing them to those of writer/director Jonathan Caouette. He's been obsessively filming himself ever since the age of eleven, when he was precociously doing monologues to camera in the character of a hysterical Southern housewife. Within a few years he was directing a musical version of Blue Velvet as a school play, with all the cast lip-synching to Marianne Faithful songs. But Caouette also turned the camera on the rest of his family: notably his mother Renee, whose own problems may go some way to explaining how he turned out so, well, interesting. A renowned beauty as a teenager, Renee began to suffer mood swings following a fall off a roof at the age of twelve. Her parents tried to sort her out with a combination of medication and the newly-fashionable electroshock therapy. Her condition has got worse and worse over the years: and Caouette has always been there with his camera, documenting it.

As I said, I'm still not sure how I feel about Tarnation. There's no denying it's a staggering technical achievement - Caouette has taken home movies, video, photos, tape recordings and anything else he can lay his hands on, and mashed them up on an Apple Mac into a movie whose total cost was no more than a couple of hundred dollars (though music clearance must have added several grand to that). There are some magnificently edited impressionistic sequences which convey the confusion of both Jonathan and Renee's lives. There are also a couple of breathtaking verite moments, but not as many as you'd think; even after thirty years in front of the camera, Caouette's family still haven't got used to the idea, and you always feel they're on their guard. But the other side of the coin is that quite a bit of the film has a dubiously exploitative feel to it, particularly in an extended sequence near the end where Caouette lets the camera run on his mother's raving for a good five minutes. Part of his intention is undoubtedly to make us uncomfortable and to make us question why we're watching this, but it doesn't make the question any less valid.

The most difficult aspect of the film is the realisation that ultimately, this isn't really about Renee, it's about Jonathan. This film wouldn't exist if he didn't have such a mile-high ego, and when it's focussing purely on his wild life it's easier to accept. In the last few minutes, he comes incredibly close to turning the film around and convincing us that this has all been about depicting his love for his mother and his sorrow for what happened to her. But given the amount of theatrical acting out he's done throughout the film and over the past thirty years, can we trust his sincerity? These are all difficult questions, but they shouldn't stop you from seeing the film, as you won't have seen anything like it before. Mind you, at present only someone as terminally self-obsessed as Caouette would have had thirty years of personal footage to make a film like this out of: with the increased availability of home video cameras, soon most people could have an archive that size. Some day, it's possible all films might look like this... 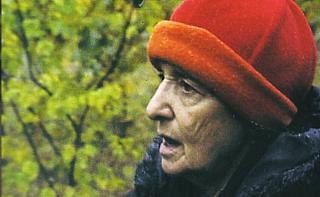 "Out of the forest I heard shooting... probably just soldiers training." About ten years ago, a diary was discovered, written by Kazimierz Sakowicz between 1941 and 1944. At that time he was living in the village of Polnar in Lithuania. The shooting he first heard in July 1941 wasn't as innocent as he'd first assumed: he gradually discovered that the nearby forest was being used as a killing ground by the Nazis. They were bussing in hundreds - sometimes thousands - of Jews every day and shooting them: by the end of 1944 it's estimated that around 100,000 people were killed there, an act of evil that simply leaves you stunned. Sakowicz took it upon himself to follow what was happening in the forest, and documented what happened there in his diary.

This documentary by husband and wife team Limor Pinhasov Ben Yosef and Yaron Kaftori Ben Yosef begins as a study of Sakowicz's diary. We hear readings of his coldly-documented statistics, see the Polnar forest as it looks today, and hear some of the people from the village tell of their memories as children from around that time. Gradually, darker themes start to emerge. It transpires that though the Germans were organising the killing, the actual shooting was done by Lithuanian volunteers. Some people in the town were taking the clothes stripped from the Jews before they were shot, and selling them for profit. And although it appears that everybody knew what was going on a few yards away from their homes, most people simply looked the other way, or in some cases actively collaborated.

Limor Pinhasov keeps insisting during his Q&A that this isn't a historical document, but that's not entirely true. The most uplifting interviews in the film are those of the survivors, a couple of Jews who were taken to these killing fields but managed to walk away again, either by their own ingenuity or by pure luck. But what makes this such an extraordinary film is its focus on the witnesses. Towards the end, the questioning gets much harsher, as the villagers are asked repeatedly why they didn't do anything to help. Some of them insist things weren't as bad as depicted by Sakowicz, others complain that they were afraid of the consequences of rebellion: none of them offers any regret for not taking action. Pinhasov's line is that this isn't a historical document but a psychological one, and its harshest question is the one it forces everyone in the audience to consider: what would you have done? 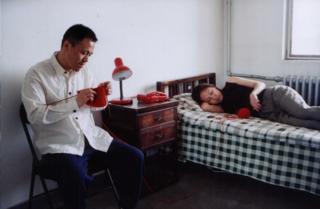 There's a certain style of Asian cinema that's popular right now: a minimalist approach in which narrative is slowed to a snail's pace, and the audience is forced to reassess their idea of what they expect from cinema. (Or the audience is forced to walk out, which is a fairly popular reaction at this screening.) This Chinese film by first-time director Zhang Lu works pretty much along those lines. We follow an unnamed retired man (Wang Xiang) in his barely-furnished apartment, struggling to find things to do each day. He's frequently visited by an unnamed woman (Cui Yuemei), who tries to persuade him that he should join her and do one last job.

Really, it's just a shaggy dog story, which at least has the decency to derive some comedy from its cripplingly slow pace. In particular, the second half has some surprisingly funny moments - mainly because there's so little else happening on screen, even the tiniest joke becomes massively amplified. Apart from that, the film's only other conventional pleasures are structural ones: the use of Tang poetry captions to replace key scenes, the use of the man's irritating door chime to signal every major plot development, the amusing conceit of giving the story a violent climax but refusing to show it on screen. But you can't shake off the feeling that you're just grasping for any evidence that there's more than a single idea here, stretched out painfully over 90 minutes. 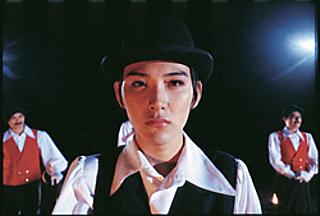 One day, somewhere in Japan, a young man kills a middle-aged woman with a knife. The young man is part of a gang, and after their initial shock they decide to keep quiet and hope there are no comebacks. But the woman is technically part of a gang too - the Midories, a group of middle-aged divorcees who meet regularly for dinner and karaoke. The Midories get themselves organised, and pretty soon the murderer is dying in the street in a pool of his own blood and piss. From that point on, it's gang war: one which is played out to Japanese pop songs from the Showa period, a love of which is the only thing the two gangs have in common. Though they'll never know that.

Tetsuo Shinohara's comedy is beautifully paced, building carefully from a quiet opening to its demented conclusion. Revenge drama is, of course, a classic staple of Japanese film - and other nationalities too, with this movie's escalating spiral of retaliatory violence working in a similar way to yesterday's Bullet Boy. But here, the whole revenge strategy is made to look very foolish indeed. Aside from the frequent bursts of comic violence, there's also some entertaining satire on Japanese stereotypes. The Midories are depicted as bumbling nobodies before their conversion into a hit squad, enjoying the way they have to concentrate on their planning "because we've never had to concentrate on anything before". Meanwhile, the boys react with a mixture of disgust and terror to the idea that middle-aged women - "the only species that will be left after a nuclear holocaust" - will somehow be responsible for their downfall. It's not particularly consistent or clever, but it's a damn sight more fun than Tang Poetry.

The Belated Birthday Girl - Delamu is the name of one of the mules plying the 'Tea Horse Route' between Yunnan and Tibet, and the people working on and living along this route are the focus of the film.  In some ways, this is a refreshingly old-fashioned documentary, like some National Geographic anthropological film.  The interviewer is never in front of the camera, and his voice is never heard (although on a couple of occasions his questions are shown in the subtitles), and it is the people's lives and stories which make this film.  The use of High Definition cameras means that the interviews can be conducted in the homes and churches and temples using available light, both giving the film a more 'natural' look and giving the interviewees an atmosphere in which they can tell their stories.  The effect of the outside world, with growing tourism and a coming highway, is referred to on several occasions, but the film wants more to show and celebrate that people are still living these lives than to warn of dangers to it.  The scenery also is, of course, quite spectacular at times, and one shot in particular of an open sheer of sand the caravan has to cross early in the morning for fear of deadly sand-storms sticks in my mind.  But in the end, the film is definitely about the people.  It is neither patronising nor sanctifying, but allows their lives to come through and lets them have their say.