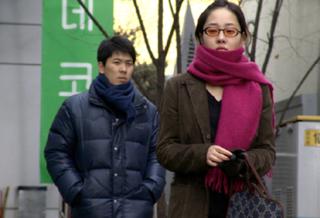 South Korea - it's the new, er, whatever the last big new thing was. You must have spotted that by now, surely? I know I've been going on about Korean films for a couple of years now, but even I was surprised when I worked out this week that there are seven films from the country in this year's LFF, and without thinking about it consciously I've booked to see six of them. (Apologies to the makers of This Charming Girl, I just never quite got around to seeing that one.)

Tale Of Cinema is actually a Korean-French co-production, unlike the other six. Initially it's the story of Sang-Weon (Lee Gi-Woo), a young man who meets up with former girlfriend Young-Shil (Eom Ji-Weon) and decides to give their relationship another go. Things don't work out, so they mutually agree that the best course of action is to kill themselves. If you think that sounds needlessly melodramatic, well, there's a reason for that: as becomes apparent when the film suddenly switches to a second story, one that's connected to the first in a number of unexpected ways and subtly echoes it.

Unfortunately, this is another one of those movies where a single great idea has been stretched well beyond its natural lifespan. And make no mistake, Hong Sang-Soo's idea is a great one (which is why I'm trying to tell you less about it than the LFF programme notes do). But once it becomes apparent what's happening, there's very little of interest left in the film, apart from some nice urban photography of Seoul by night. Hong's an interesting director, as last year's Woman Is The Future Of Man showed, but he's left himself far too little to work with here. 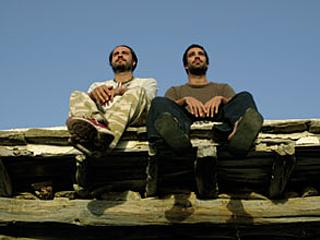 We're a bit light on Spanish comedy this year, aren't we? In the early years of this site's LFF coverage, you may remember we were one of the few to rave about the work of Luis Miguel Albaladejo. Sadly, since his 2001 film Ten Days Without Love he's never been seen at the LFF again, even though he's still making movies. (If you've got equipment capable of playing region 1 DVDs, you're advised to track down his splendid 2004 production Bear Cub: it has all the warmth, humour and humanism of his earlier work, with lashings of big gay cock thrown in as a bonus.)

In the absence of Albaladejo, it's possible that writer/director David Marques may be able to act as a substitute. His film tells the story of two close friends, Adria (Adria Collado) and Kike (Eric Frances). Adria is a city-based sports journalist looking to take some time out: Kike is house-sitting a place in Ibiza for a mysterious Frenchman. With occasional interruptions from the Frenchman's cousin Jan (Jean-Luc Ducasse), the pair chat about anything and everything. Why eating snails is gastronomically acceptable, but eating slugs isn't. How cool a movie about 9/11 would be if they gave it a title like Ground Zero: Total Disaster. Why masturbation is almost exactly the same thing as gay sex. You name it, they'll transgress society's normal boundaries regarding it (including a cracking Christopher Reeve gag that's sadly lost some topicality in the year between shooting and release).

The best part of Isolated is the moment when you realise that this is all you're getting: two men talking hilarious bollocks for eighty minutes straight, without any pretensions towards character development or plot. At one point, when they're discussing cinema, they slag off films that just consist of two people talking, in a similarly post-modern fashion to Spying Cam last week - the difference is, this film dares to keep things minimal for its entire running time, rather than bottling it in the last half hour like the Koreans did. Shot during a break in production on a bigger budget film, the whole thing seems to have been put together in a demented rush - written in two weeks, rehearsed in three, shot in one. That energy transfers to the performances of Collado and Frances, which are utterly true to life. Couple that with a script which never flags in its comic invention, and the result is a pure delight - like spending the evening with your two funniest mates as they attempt to outbanter each other. A sequel with the same characters is apparently already on the cards: count me in. 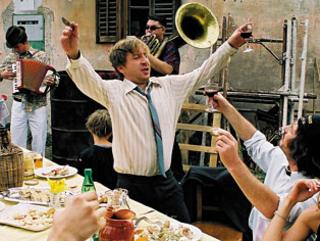 If Cheeky Spanish Comedy is an underrepresented genre this year, then so is Moderately Depressing Comedy From The Former Soviet Bloc: this film from Slovenia will have to fulfil our quota for LFF 2005. Pero (Gregor Bakovic) makes a living from giving speeches at people's funerals - the sort of speeches that are more likely to contain quotes from Mark "Chopper" Read than references to the Bible. ("Everybody wants to go to heaven, but nobody wants to die yet.") For a man whose main business is death, Pero has a lot of other problems on his plate: a suicidal father, a sister with an abusive spouse and a deaf daughter, and a relationship with student Renata (Mojca Fatur) that's taking a long time to get going.

Jan Cvitkovic's film is very enjoyable for its first two-thirds, but then it loses its way. Initially, it's a beautifully shot black comedy with some nicely timed gags, a sharp eye for the absurdity of our reactions to death, and a bizarre soundtrack of Eurodisco classics rearranged for oompah band. It's the sort of thing we expect from glum eastern European comedies, and sequences such as a suicide attempt by Pero's father are handled with precisely the right amount of deadpan glee.

But suddenly there's a switch into much darker territory. Cvitkovic said in the Q&A afterwards that he wasn't interested in sticking to the traditional rules of how stories are structured, and I can totally understand what he's trying to do: I just don't think he's got the skills yet to handle such a dramatic change of tone in such a short space of time. Even though the threat of mortality is there in the story from the very beginning, the sudden lurches into tragedy feel unexpected and clumsily manipulative. But the film eventually manages to recover its poise, and its final two shots are literally breathtaking. Flawed as it may be, I'll definitely be looking out for Cvitkovic's next film on the evidence of this one.