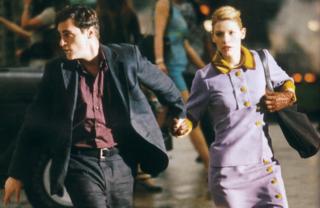 It's 2021, and the world is going to hell in a handbasket. A new ice age is just around the corner. New Yorkers are literally dying in the streets from lack of love. And in Uganda, people have started spontaneously flying. In the midst of this turmoil, John (Joaquin Phoenix) flies into the Big Apple to sort out the final details of his divorce from ice skating star Elena (Claire Danes). But during what's meant to be a two-hour flying visit, he discovers that Elena's management are going to somewhat extreme lengths to protect their investment.

We've been here before. The agonisingly bad dialogue from a major European director, apparently out to prove conclusively that English isn't his first language. The parade of big American star names lining up to make themselves look daft. The compulsive hopping from one continent to another. The use of sci-fi devices that would be rightly laughed off the screen in a genre flick, but are meant to have significance here. The similar use of romantic comedy plot contrivances, as part of a love story that's supposedly too big and important to have time for narrative coherence. A dozen years ago, this film was made by Wim Wenders and called Until The End Of The World. That's how bad it is.

The only reason I can see why Thomas Vinterberg made this film was as a direct reaction against his previous one, the Dogme classic Festen. And on that score he's certainly succeeded. Festen had raw camerawork, teetering on the brink of visual collapse by the end: IAAL has glossy, hollow widescreen imagery that wouldn't look out of place in a commercial. (Anthony Dod Mantle's photography is one of the  few reliable pleasures the new film has.) Festen had characters: IAAL has ciphers, who have no life outside of that required to move the story forward. Festen had a dark sense of humour even in the midst of its most painful sequences: IAAL appears to have one joke about fifteen minutes in, when John's brother Marciello (Sean Penn) announces that he's overdosed on airsickness pills and now has to spend the rest of his life flying - except it eventually transpires that this isn't a joke at all, giving Penn a license to talk bollocks from planes for the rest of the movie.

Festen's ultimate collapse of the family unit was small-scale, personal and deeply moving: IAAL's association of a single divorce with the end of the world is in the same overblown arthouse romance tradition as Vincent Ward's far superior Map Of The Human Heart, and that was shite as well. Festen was a great movie: IAAL... oh, you get the idea. 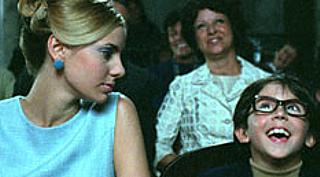 The LFF programme has a lot of little (f) symbols against films this year, suggesting that they may be suitable for family audiences. In previous years they've just had one big gala show for the kids, but I guess that the change in festival dates has encouraged them to make a push for the half-term market. It's a push that seems to have failed, unfortunately. The most interesting film in the family section (The Cat Returns) had its screening cancelled at the last minute: the two others I've seen (The Underground Chamber and this one) played to quarter-full houses. It's a shame if the subtitles are putting parents off, particularly with a film as charming as this one.

Valentin (Rodrigo Noya) is an eight-year-old boy in late sixties Argentina. He's living with his gran Abuela (Carmen Maura), a generally lovable old sort apart from her insistence that everyone else in her family is mentally ill. Valentin's mother is long gone, while his father is dating a succession of young blondes. When the latest of these blondes, Letitia (Julieta Cardinali), meets up with Valentin to talk about his dad, he feels that his run of bad luck may finally be changing.

The latest film by writer/director/actor Alejandro Agresti (I found out after the event that I saw an earlier film of his, Wind With The Gone, back in 1999) is an interesting mixture of comedy, tragedy and coming-of-age drama. It shouldn't cohere as well as it does, but it does, even managing to make room for the odd digression like the story of a priest who got into trouble for mentioning Che Guevara during a sermon. Maura is in excellent form as usual as the grandmother, though it's a bit of a shock to realise she's old enough to play grans nowadays. Noya is also very good indeed in the title role, particularly in his couple of scenes alone with his potential future stepmother, which are played to perfection. It would have been so easy for Agresti to go for the emotional mush-out towards the end, but he pretty much avoids that: for the most part, this is an unsentimental study of the violent mood-swings that eight-year-old boys go through, and the general feeling they develop at that age that the whole world is planning something behind their backs they can't quite understand. Or is that just me again? 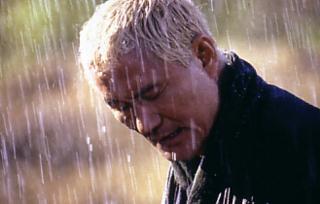 I entered the Odeon West End at 3.55pm this afternoon for the screening of Valentin described above. At that time, there were already six people queuing up for returns for the sold-out screening of Zatoichi some two hours later. One of the people in the queue had brought a chair. Lost In Translation may have had the ticket sales, but Zatoichi is the film in this festival with the greatest weight of expectation riding on it. And for my money, it exceeds those expectations effortlessly.

We're in a small village in Ye Olde Japan, which is currently run by a couple of warring crime gangs - pretty much like any contemporary yakuza story, then. Masterless samurai Hattori (Tadanobu Asano) arrives in town looking for a job to pay for the care of his sick wife, and ends up working as a bodyguard for the most ambitious of the gangs. But there's another new arrival in town worth noting: Zatoichi (Takeshi Kitano), the blind masseur with a fondness for gambling and an almost supernatural ability with a sword.

Neil LaBute was talking in Sunday's interview about how his films are getting more cinematic all the time: "recently I discovered that the camera can move..." It looks like Kitano (who also wrote, directed and edited this film) has finally discovered this too. The static comic tableaux we associate with him are still there to some degree, but he's realised that an action picture like this one requires a more dynamic approach. The change in style pays off wonderfully in the swordfight scenes, as does the unsubtle use of CGI for the gore and weapon effects. This doesn't make any bones about being anything other than cartoon violence, so the unrealistic spurts of blood only add to the fun.

And it's tremendous fun. This is a pure entertainment movie: an update of the blind swordsman stories that have been popular in Japan for decades, enlivened by Kitano's assured visual sense and his usual bursts of ultra-dry humour. There's a splendid supporting turn by Tadanobu Asano (his third film of this festival after Last Life In The Universe and Bright Future), but as ever it's Kitano himself that you can't take your eyes off. He's almost unrecognisable with his blonde hair, stooping gait and comical old man drawl, but equally unrecognisable when he erupts into action. And in the middle of all of this, we get not one but two dance numbers: the second one, featuring a show-stopping turn by The Stripes, lifts the fun to stratospheric levels. Kill Bill is all well and good, but I'm sure even Tarantino would recommend that you see the real thing for yourselves. 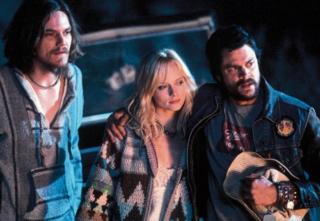 As Sandra Hebron says in her introduction, it's one of those stories that you couldn't make up. When country-rock star Gram Parsons died in 1973, his road manager Phil Kaufman was duty bound to honour a pact they'd made: he was to take Parsons' body out to the Joshua Tree desert and cremate it there. Thirty years later - on Parsons' birthday, no less - we get the world premiere of David Caffrey's film version of the story, with Kaufman himself in attendance.

In the film version, Kaufman (Johnny Knoxville) hooks up with Larry Oster-Berg (Michael Shannon), a hippy who usefully owns a hearse (albeit a yellow one with a floral motif). They swipe Parsons' body from the airport and drive off to the desert with it. In hot pursuit are Barbara (Christina Applegate), Parsons' gold-digging ex: Susie (Marley Shelton), Kaufman's girlfriend: and Stanley Parsons (Robert Forster), Gram's father, who was expecting to pick his body up at the airport.

There have been some tweaks to the original story - for one thing, the hearse wasn't yellow - but the real-life Kaufman assures us that this retelling of an old rock legend is as faithful to its spirit as possible. There are so many ways in which this could have been played: as a moralistic tale of the perils of drug abuse, or a sensitive and hagiographic tribute to Parsons. Writer Jeremy Drysdale takes what has to be the best approach: recognising what a hilarious story it is, but at the same time recognising that it's a story driven by two men's friendship and loyalty to each other. There are some terrific jokes here, but there's something deeper going on at the heart of the film.

It's splendidly acted throughout. Just because Johnny Knoxville can put live bees inside his underpants, that doesn't automatically mean he has acting talent: but he gives a thoughtful performance as Kaufman, playing him as a man who's so obsessed with fulfilling his friend's final wishes that he almost forgets to think of him as a friend. He gamely battles for screen time with the scene-stealing Michael Shannon, who starts out playing the stereotypical stoned hippy, but gradually gives the character more depth as he realises what's going on. Shannon's responsible for a couple of the biggest audience laughs of this festival, notably when he tries to drive the hearse through a fifty-yard gap in a wall and misses. And an excellent soundtrack ties the whole thing together: lots of Parsons, sure, but with some surprisingly fitting choices of additional music, including Primal Scream towards the end. (No, it's not Kill All Hippies.)

Hey all. How come ive never hear of "Its all about love" before?thanks for the information, i love joaquin! he's good in every movie he plays.

I'd imagine you haven't heard of It's All About Love because its DVD distribution was allegedly handled by moviesplanet.com, whose service is apparently so unbelievably shitty that nobody ever got to see the film. In the end, the company was forced to fill blogs with poorly-written fake comments in order to try and win back custom. Hope that helps.