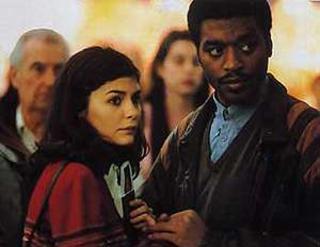 I get to the spot in Leicester Square where the queue for the Opening Gala normally starts, just outside Pizza Hut. There's no queue there. Instead, one of the local mentalists is sitting on the ground, mournfully humming Can't Help Falling In Love With You through an abandoned traffic cone.

Let's face it, these things aren't as glamorous as they used to be.

A quick bit of research reveals that my first Opening Gala was The Remains Of The Day, back in 1993. Now that was glamorous, bordering on the psychedelic. Hundreds of onlookers lined up behind the crash barriers: they've no idea what's going on, they just know that if you stand behind crash barriers long enough someone famous will eventually show up. And you do the walk: from Pizza Hut to the front door of the Odeon, basking in the confusion of the crash barriered hordes wondering who the hell you are.

Nine years later: and by comparison, my seventh Opening Gala is somewhat lacking in bling. A more sparsely populated walk (round the other side of Leicester Square just to confuse the regulars), and a much smaller smattering of B-list celebs making their way along it. One interesting innovation is the live video feed from the entrance lobby, going straight to the cinema screen for the benefit of those already in their seats. Other than that, it's business as usual: Donald Mackenzie giving his annual performance on the Odeon's organ ("one of those great British traditions," sighs Anna, "like Marmite..."), speeches from the various BFI and sponsor bigwigs, a nicely matter-of-fact intro to the film and cast from director Stephen Frears, and then we're off.

Dirty Pretty Things is the story of Senay (Audrey Tautou) and Okwe (Chiwetel Ejiofor), both working in a London hotel for sleazy boss Sneaky (Sergei Lopez). Senay is a Turkish immigrant who shouldn't really have a job here: Okwe is an African fugitive who shouldn't even be in the country, holding down a day job as a cab driver in addition to his night shifts at the hotel. The film uses these two characters to explore the hidden life of London, and the lives of the 'illegals' who do the dirty jobs that keep the city running. And it looks at how those lives are affected by the discovery of a human heart in the u-bend of a hotel toilet.

Steve Knight's script is the sort of material that Stephen Frears has always done well with: covering a social issue that's normally swept under the carpet, but ensuring that it's done within the context of a well-told story. The unpleasantness that Senay and Okwe discover could easily sound ludicrous, the stuff of urban myth: Knight's real achievement is to show their lives in context, displaying the desperation that would lead people to risk everything for the sake of a small degree of freedom.

He's helped by a hugely sympathetic cast. Chiwetel Ejiofor - and thanks to this screening, I finally know how to pronounce his name (pretty much as written, really) - is at the heart of the film, and pays off on the promise he's shown in his various roles on the London stage. Audrey Tautou struggles womanfully with the English dialogue, but always does so in a thoroughly charming and convincing way: even when she muffs the odd line, you always know exactly what she means. And best of all is the ever-reliable Sergei Lopez, who tackles his first major English role with all the gusto you'd expect from his earlier Spanish and French work. Hopefully this won't mean that he'll now end up playing countless Eurotrash villains in Die Hard ripoffs.

Much was made in Sandra Hebron's introduction about how fitting it was that a multicultural festival based in London should open with a film like this. While the multiracial cast partially bears this out (amusingly, it's only really the English immigration officers who are stereotyped here), I'm not sure it's as great an example of a London movie as, say, Wonderland. Chris Menges' typically excellent photography thrives on the contrast between the warm lush interiors of the hotel and the cold harshness of Senay and Okwe's daytime lives, but there's no real sense of place evoked: this could be any city, anywhere. Then again, maybe that's the point.