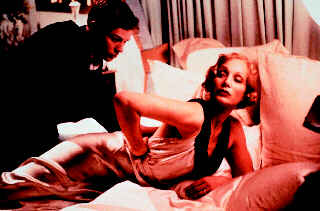 I didn't manage to get into this year's Opening Gala, unfortunately: it was sold out by the time I tried to get tickets. Which is surprising, as on paper it didn't seem like an especially strong choice, given director Robert Altman's spotty output of late. Still, a couple of Spank's Pals managed to make it in there, so here's fan favourite Old Lag with his view of what it was like.

Entering into Robert Altman's Gosford Park country estate was like walking in to a giant mechanical clock, as backstairs the estate hummed into action for Sir William's shooting weekend. It was fascinating and perhaps an American fascination to see how the servants functioned for this social occasion. It was fascinating also to see the cream of British acting: Alan Bates, Richard E Grant and Helen Mirren sweat in cameos below stairs. This began to pall after a while and slow down the film but slumber ye not. Upstairs, while the guests were getting equally bored with their weekend, the subtle clues as to who was related to who, who was sleeping with who and who wanted money from who were being laid out.

All revolved around the self made and unpleasant Sir William, and I can quite believe the blurb in there being 25 sub plots. Your reviewer had to have a lot of it explained to him afterwards by Ali from Woking because it was all hinted at in passing. Never mind the seeds of clues for the murder whodunnit the film turned into. In the end the simplest, most inexperienced and newest of servants figured it all out with refreshing challenges, and it was all covered up in the nicest of possible ways. We were never to learn what the police made of it, bumbling and incompetent as they were, totally bypassing the rich tapestry of life below stairs. The Americans of course thought it all absurd and good fodder for a Hollywood production. Their refreshing casualness was not appreciated below or above stairs, other than the music of the guest Ivor Novello.

Looking at Altman's CV he has been incredibly productive and workmanlike in his career and I am sure this film will be very popular, but it is not really my cup of tea. Neither Adrian Wootton nor Joan Bakewell, in their festival opening speeches of thanks to those who made it possible, made reference to the placard wielding junior staff of the BFI and film industries outside, complaining about low pay.