Before I start, a quick message to the occupant of seat F9 at this screening. SHUT UP. You know, when you're compelled to say every single thought that passes through your head out loud (such as "oh, a camel"), that's probably a symptom of some sort of serious medical complaint that requires treatment as soon as possible. GET HELP NOW.

Anyway, the circus comes to a small Polish town, and when it goes away it leaves a camel behind. The camel wanders into the garden of Mr and Mrs Sawicki (Jerzy Stuhr and Anna Dymna), who take pity on the creature and decide to look after it. Initially, Mr S is the talk of the town: admiring crowds gather when he takes the camel out for walks, and he's inundated with offers to exploit it commercially. But Sawicki respects the dignity of the animal, and turns down all requests for rides and photo sessions: as a result, the town's attitude towards them begins to change.

This is a glum absurdist comedy in the traditional Eastern European style. It's notable for being based on a script by the late Krzysztof Kieslowski of Three Colours fame: written in 1973, the script was sat on for over 25 years because of objections by the Polish authorities, presumably to its understated political message. There's a clever shift in tone, as the film starts as a knockabout satire on official bureaucracy (nobody knows what tax rate to charge the animal, because the guidelines don't have an entry for camels) but mutates into something darker as the town unites to remove the one thing that makes Sawicki an individual.

It's nicely acted by everyone, particularly the camel and Jerzy Stuhr (the latter also directs). Pawel Edelman shoots the film in beautifully sharp, high-contrast black and white: in some cases the whites are so dazzling it's virtually impossible to read the subtitles. But even at a tight 75 minutes (it was made for Polish TV and will presumably pad out to an hour and a half with adverts), this can drag a little at times. Still worth a look, particularly if you're a fan of Kieslowski's more comic works. 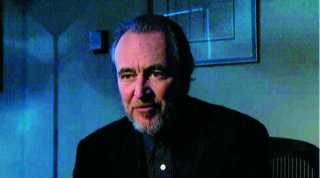 What's with all the indecision in Florida right now? Any study of the comparative levels of sex and violence in Hollywood cinema would settle this once and for all: given the choice, Americans will go for gore rather than bush any day. Adam Simon's documentary on American horror movies looks at why that's been the case for some time.

Simon's approach is to focus on one time period - 1968 to 1978 - and concentrate on what he regards as the key films of that period: Night Of The Living Dead, Last House On The Left, The Texas Chain Saw Massacre, Dawn Of The Dead, Shivers, Halloween. His aim is to show how these movies - some of which can seem a little campy to modern audiences - can only really be understood in the context of the times in which they were made. This is put across brilliantly in an opening montage which mixes up scenes from George Romero's films with real life atrocity footage: Vietnam, Kent State, the various political assassinations of the late 60s. Simon shows the climate of fear that engulfed America at this time, and how both filmmakers and audiences used horror films as a "boot camp for the psyche", providing people with horrors they at least had some control over. Gore make-up artist Tom Savini is particularly enlightening in this regard, as he explains how the atrocities he saw in Vietnam fed directly back into his work.

Simon's chosen films are all early works of some of the most articulate directors in the genre. As a result there's lots of fine interview footage with George Romero, Wes Craven, Tobe Hooper, David Cronenberg and John Carpenter. Again, the aim is to put these films in an historical context: so Romero's zombie-shooting rednecks echo the race riots of the sixties, Craven's Last House Of The Left appropriates images of Vietnam execution shootings, and so on. (Though I think Hooper's claim that The Texas Chain Saw Massacre was a direct response to the 1973 fuel crisis is pushing it a tad.) There are also interjections from director John Landis, but they're a little jarring as Simon can't stop him laughing all the time. "Last House On The Left! Ha ha ha ha! It's the most perverted movie ever made! Ha ha ha ha!"

Three academics also provide their thoughts on the role of horror cinema. Unfortunately, one of them is just that little bit too young to be taken seriously: he looks like a horror fanboy who's picked up a dream job where he can watch scary movies in college all day. ("I first saw Night Of The Living Dead at my bar mitzvah party. Lotsa kosher laws broken at that one.") But between them, they do come up with a reason why we still need these films nowadays: people isolate themselves from the constant stimuli of modern society just to be able to get through the day, and horror movies are our method of piercing through that protective barrier and briefly allowing ourselves to feel something again. The American Nightmare is a wonderfully constructed mixture of serious analysis for the academics and big messy clips for the gorehounds, so there's something for everyone here. Don't know if it's going to be seen again in this country (a couple of the clips shown are from movies still banned in the UK): hopefully it will, as this is an important piece of work. 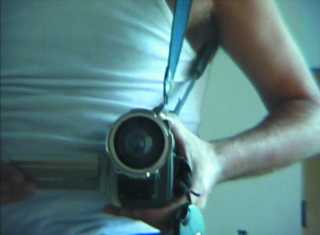 A trip up north to the land of the Shoreditch Twat for my once-a-year visit to London's most pretentious cinema, the Lux in Hoxton. Fittingly, according to the LFF talent list, the film I've come to see has been accompanied by a delegate called Sebastian Ponce.

In October 1999, the Falklands government finally removed the ban on Argentinians visiting the Islands, for the first time since the war of 1982. Fabian (Fabian Stratas) travels there from Buenos Aires two months later. He's filming everything on his week-long trip secretly, via a digital camcorder he carries everywhere on a shoulder strap (much of this film is shot at a 45 degree angle as a result). He sees himself as a ladies' man, and we watch as he talks to various women in Port Stanley, desperately trying to pull. Eventually he succeeds with the English nurse Camila (Camila Heaney). But what's he really up to? Well, if you read any of the hysterical press coverage that followed the announcement of this film's entry into the LFF, you'll probably know already: but it's more fun finding out for yourself.

For all the accusations levelled at Fuckland - subversive, racist, libellous - the biggest shock of all is discovering what it really is: the first Dogme 95 feelgood movie. The technique is astonishing, guerilla filmmaking at its finest: Stratas and Heaney are the only two actors in the whole thing, and everyone else they interact with is a real person being secretly filmed. So there's a whole layer of comedy in the dubious relationship between Fabian and Camilla, plus on top of that the subversive thrill of Fabian talking to the islanders and getting a real glimpse into their attitudes towards Argies seventeen years on.

The two actors cope admirably, given the crazed method in which the film was improvised around the people they met (and it really was shot in a week, the secret filming being necessary as the Falklands government would never allow a story like this to be legally filmed on the Islands). Fabian is a parody of the macho, swaggering, posturing Argie stereotype known the world over: Camila is a slightly clueless English girl who doesn't really see what's happening until it's too late. The contrast and developing relationship between the two makes for great comedy, and the occasional moment of surprising emotional honesty.

Hardline adherents to the Dogme 95 Vow Of Chastity could argue that at least a couple of the rules are broken by Fuckland, notably those relating to the use of music and the directorial credit for José Luis Marques. But what the hell? Rules are made to be broken, particularly in a film like this which breaks several international laws simply by existing. This is subversive cinema at its best, getting its political points across in a funny and entertaining way. No sign of a British release as yet (and let's face it, the title just might be a problem), but in the meantime you can always check out the official website. (Non-Spanish speakers can take their chances with the somewhat loopy Babelfish translation of same.)

Old Lag - The contract killing of businessmen and the occasional journalist is quite a common phenomenon in Russia. Likewise private 'security' for businessmen staffed by the many that have come out of the Russian Army and have no obvious job. So it was interesting for this to be the theme of this Russian action movie. It has been said that however hard you try there are only 13 possible plots for a book. Of the 13 this one is the chase. The contract killings are given some moral support in that they are conducted in revenge of a friend who tried to have the exploitation of his brother unravelled. The Russian scenes are very reminiscent of Moscow, but the bulk of the action occurs in America to track down, gain money from and kill the Chicago businessman at the top of the semi-criminal food chain. So it is a shoot-em-up chase with the goodies outwitting the baddies and some laughs along the way. There was a nationalistic streak to the film with the heroes saying that America is an unsafe place of crime, and that Russia is home. This is epitomised by the tart with the heart who has lived in the US since the 80's, latterly as a prostitute getting a second chance and returning home with the hero and the money. The end is left open sufficiently for Brother 3.