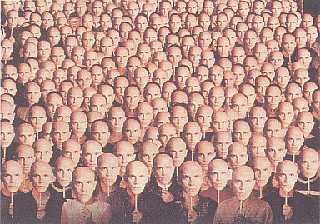 Every film festival has one film with a buzz: the one everyone's talking about, the one where ticket demand massively outstrips supply, the one for which people would sell their grandmothers into white slavery to get a ticket. This year's LFF has Being John Malkovich. Two sell-out screenings and a third just announced, and people were still literally queueing round the block for returns for an afternoon show, which is unheard of in my experience. I only got into this screening after 50 minutes of queueing in the rain and meeting a very nice man who sold me his spare ticket for a fiver because he didn't have any change. Was it worth it? Absobloodylutely.

Puppeteer Craig Schwartz (John Cusack) shares his house with his frumpy wife Lotte (Cameron Diaz, unrecognisable in a horrific Amy Brenneman wig) and her menagerie of animals. Puppetry isn't paying the bills, so he takes on an office job. He tries to flirt with co-worker Maxine (Catherine Keener) but fails miserably. Matters take on an unexpected turn when he looks behind a filing cabinet in the office, and finds a portal into the consciousness of actor John Malkovich (er, John Malkovich). Once you enter it, you see the world through the eyes of Malkovich for 15 minutes before being unceremoniously dumped onto a grass verge just past the New Jersey turnpike. It's shortly after this discovery that things start to get strange.

In a year where a whole series of virtual reality films (from The Matrix on downwards) have claimed to raise deep philosophical issues about the nature of existence and the self, Being John Malkovich is the real deal. As Craig and Maxine exploit the portal for their own financial gain, they tap into a deep-seated human desire to inhabit someone else's skin, even if only for a short while. But as the duo and Lotte use the portal themselves to virtually cheat on each other - and Malkovich starts to become aware that something's going on inside him - the moral issues get more and more complicated.

The key to making all this comprehensible is Charlie Kaufman's insanely detailed script, not necessarily the direction of pop promo genius Spike Jonze - apart from a couple of characteristic visual flourishes, I suspect any semi-competent director could make a great film out of material this rich. The twists and turns in the plot build with meticulously worked-out logic, exploding into a number of set pieces of pure genius. A three-way sex session that only involves two people: the first monkey flashback ever seen in the movies: and best of all, the unimaginable horror when Malkovich goes through the portal himself. I'd cynically assume that Being John Malkovich is far too smart to be a great popular success... but I would so, so love to be proved wrong. 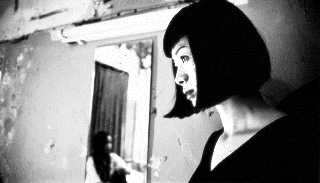 Hong Kong cinema - or at least, the UK's love of it - has changed quite a bit since that initial wave of John Woo mania struck the country in the early 90s. It's generally accepted nowadays that the action thrillers that flooded our video shelves over the last few years simply aren't being made to that quantity or quality any more, as all the key players in the genre have quit the island to work for the Yankee dollar in Hollywood. A lot of this is down to the handover of Hong Kong back to the Chinese in 1997, and post-handover HK cinema seems to be a lot more introspective as a result. At least, that's how it looks from the stuff that makes it out to film festivals.

Writer/director Yu Lik Wai is, unfortunately, no Wong Kar-Wai: these dislocated lives have been examined in more detail in movies like Happy Together and Fallen Angels, and he can't achieve either the style or the depth of those classics. What he does get across, however, is the alienation that the mainlanders feel within Hong Kong (despite the initially surprising caption announcing the location as "Hong Kong, China", which we'll all have to get used to). There are some neat kitsch touches as the mainland duo try to make themselves at home in this strange land, singing along to a Chinese version of Chirpy Chirpy Cheep Cheep and realising the potency of cheap karaoke videos. It's disjointed but reasonably watchable, and things are helped along by Tony Rayns' unusually detailed subtitles: they go as far as pointing out some of the in-jokes relating to the movie and music extracts that appear in the film, such as a black and white love story on TV that turns out to be a classic Chinese propaganda flick. 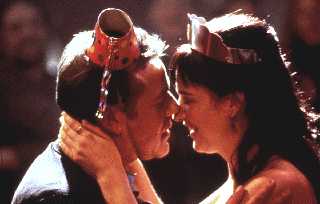 The directorial debut of Kay Mellor, best known for writing TV series like Band Of Gold and Playing The Field, tells the story of Kate (Kerry Fox), a romantic novelist whose life is coming apart at the seams. Her lecturer husband Rob (David Morrissey) has left her for one of his students: her novel is showing no signs of getting anywhere near publication: and if she doesn't have a baby within the next year or so, she'll never have one at all. To cap everything, Dave (Ray Winstone), who's just been dumped by Rob's new girlfriend, has crashed his car into Kate's and loudly bawled her out for it. Now, see if you can guess where the story goes from here.

It's a surprise to have to report that the main problem with Kay Mellor's directorial debut isn't the direction: it's the writing, which is quite frankly piss-poor and fathoms below the standard of her TV hits. Critic Roger Ebert, notoriously sharp on spotting movie cliches where they occur, has noticed how horror cinema relies heavily nowadays on the concept of the Idiot Plot: the kind of storytelling which requires all its characters to behave like total idiots, otherwise no story would exist in the first place. (For example: "There's an alien monster aboard the spaceship. No one's safe. Excuse me, I'm just going into this dark room by myself.")

We ridicule this sort of thing when it happens in horror movies, so the same should apply to romantic comedies. The whole story of Fanny And Elvis would be over in three quarters of an hour if it wasn't for two key scenes in which the two leads totally fail to communicate with each other through their own blind stupidity, thus allowing the plot to be dragged out to include a couple of reconciliations. The jokes, such as they are, are feeble, and the story even falls back on the standard 90s romcom device of making the female lead's best friend a gay man (Ben Daniels) to try and persuade us how contemporary this all is.

The acting is what stops this from being totally unwatchable, and Mellor has to be given credit for coaxing two extremely likeable performances from Kerry Fox and Ray Winstone, the latter being particularly impressive in a role that for once doesn't require him to twat people with snooker balls in a sock. And the movie looks fine as well, with nice use of Yorkshire locations. But in the end it can't be escaped that Fanny And Elvis is a cinema film struggling with a mediocre TV quality script.

Ken - I had a spare ticket for this film, and since Old Lag was upset at how few films he had obtained tickets for, I sold it to him. So, where were you Old Lag? Anywhere but here. Still, the ticket would only have gone to waste as I didn't find any arm candy to invite. The film stars Susan Sarandon as the neurotic dreamer mother of Natalie Portman. The daughter by comparison is very down to earth, has no stars in her eyes and wars with her mother. Her mother uproots them from their Wisconsin home to look for excitement in Beverly Hills. Apparently there is a Hollywood competition at the festival for who can play the world's worst mother. Kathleen Turner's entry was in The Virgin Suicides. Susan Sarandon's entry includes stopping in the middle of the desert to dump her 14 year old daughter by the roadside to hitchhike!  Unfortunately her behaviour after that isn't as bad - indeed many children would consider being forced to eat ice cream a good thing - merely not the stability the girl needs. The girl's dream is to get away from her mother by going to an Ivy League college, and the ending would have been predictable even without Susan Sarandon giving it away in her introduction before the movie - the director (Wayne Wang) said something innocuous about why Natalie wasn't at the premiere, and Sarandon told him he was giving away the ending of the movie! Very enjoyable.

Ken - Kerry Fox plays a writer who discovers her biological clock is ticking a lot faster than she imagined, on the same day that her husband leaves her for another woman. The other woman's ex is played by Ray Winstone, and while initially repulsed by him, in the way of all these love stories he ends up as the father of her children. The story line is for some inexplicable reason (unless it's merely to cash in on the millennium) mixed in with the year 2000. The film is written and directed by Kay Mellor whose daughter Gaynor Faye plays the aforementioned other woman. Interestingly Gaynor has to wear a dominatrix outfit in one scene. 'Not the sort of thing I'd ever wear' she was overheard to say after the film (but apparently her mother insisted on it), yet she was wearing a dress, the corset-like top of which looked as if it were recycled from the very outfit.