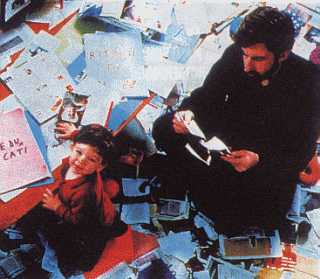 "Jennifer Beals! Jennifer Beals! Flashdance!" (for best results, read that preceding quote in an Italian accent) Funny what sticks with you from a film, isn't it. Nanni Moretti's big breakthrough film was 1994's Dear Diary, an incredibly personal documentary tracing his life for a year as he pottered around Rome on his Vespa, holidayed on the Aeolian Islands and went through a series of treatments for a mystery illness. Veering between real events and fictional episodes in the blink of an eye, my favourite bit involved him seeing Jennifer Beals in the street and chasing after her like a starstruck loon.

Aprile takes the same format, but with a bit more of a political edge to it. It begins in 1994, the year that Berlusconi was elected to power. Watching the events on TV at his mother's house, Moretti lights up his first joint (with apologies to his mother) and starts to make plans for a documentary which will explain to the world how Italy has got itself into this state. The only problem is, this clashes with his long-cherished dream of making a musical about the life of a Trotskyist pastry chef in Stalinist Italy.

A year and a half later, Moretti has ditched the musical because of a creative block, and has resigned himself to following political rallies to gather footage for his documentary. By now, he has an additional thing to worry about: his wife Sylvia is expecting their first child. He does everything possible to ensure the healthy development of his unborn son: only taking Sylvia to decent cinemas with good sound to get him used to the idea, and worrying about the effect of their sitting through a screening of Strange Days ("I've exposed my son to a piece of memorable shit..."). But when Sylvia tries to get him more actively involved in the child's future, he distracts himself with ludicrous trivia, like the fact that his phone was designed by the same person who designed rigatoni (the latter design was a failure because the sauce kept sliding off). Eventually, once his son Pietro is born, Moretti begins to discover some sort of focus in both his home and work lives.

You do have to wonder about how Moretti constructs movies like these. How true to life is all this? Does he really have this much trouble making films? Does the documentary actually exist, or did he just film a series of events over the last four years and use the structure of Aprile to hang a series of disjointed sequences together? In the end, it doesn't really matter, because the individual sequences are so powerful, particularly a glorious scene of a political rally held in the rain which is just a series of shots of umbrellas stretching as far as the horizon. And Moretti's personal charm holds it all together beautifully: you come out of the film wanting to crack open a bottle of wine with him and just have a chat about things.

By the time we get to the magnificent closing scenes, Moretti's concentration has recovered to such a degree that he now feels ready to have another crack at his musical. Which is as it should be, because effectively, Nanni Moretti is that Trotskyist pastry chef, making scrummy left-wing treats that you just want to gobble down in one. See Aprile when it gets its British release: it's much better than that last atrocious metaphor. Promise. 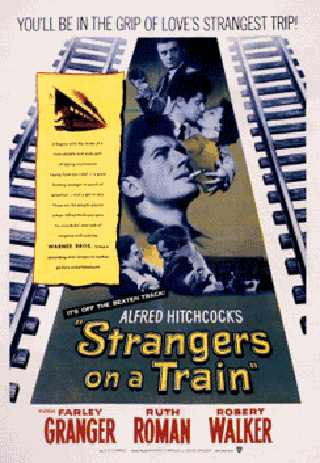 Warner Brothers are 75 years old this year. Well, not the Warner Brothers, obviously, Jack and the boys are much older than that: but the studio they formed is now three-quarters of a century old, and as part of the celebrations they've been minting brand new prints of some of their classics for cinema release. As a result of this, The Exorcist is currently the highest grossing film in the UK a full twenty-five years after its initial release.

Alfred Hitchcock's 1951 thriller Strangers On A Train has also had a new print made, which got a public outing here before being carefully stored away in the British Film Institute's archives. I haven't seen this movie for about 15 years now: the last time I watched it was on TV, when I was babysitting my kid sister and we both sat up watching a double bill of Strangers On A Train and Psycho. (I was never a particularly good babysitter.) Apparently the new print is based on an alternative edit of the film, but you'll have to find someone who's seen it more recently than me if you want to find out what changes were made.

The plot is perfection itself: but when Patricia Highsmith wrote the source novel and Raymond Chandler co-wrote the screenplay, you'd kind of expect that. Tennis player Guy Haines (Farley Granger) and borderline psychopath Bruno Anthony (Robert Walker) meet by chance on a train, and discuss their relative woes: Guy's wife won't divorce him to allow him to marry his girlfriend Anne Morton (Ruth Roman), and Bruno's father is giving him grief. Bruno suggests a plan for the perfect crime: Bruno murders Guy's wife and Guy murders Bruno's father ("criss-cross"), thus solving all their problems and fooling the police into thinking they're two unconnected, unmotivated killings. Guy shrugs this off as the ravings of a maniac, only to find within twenty-four hours that Bruno has actually killed his wife, and is now blackmailing him into fulfilling his part of the bargain.

As you'd expect with Hitchcock, aside from the usual dark humour and lousy back projection there are half a dozen or so set pieces of pure genius, which this gorgeous new print shows off to great effect. There's the murder of Guy's wife in a fairground, a party scene where Bruno and two old ladies gleefully discuss (and demonstrate) methods of killing, a glorious bit of suspense when Bruno drops a key piece of evidence down a drain and has to get it back, and a hell-for-leather climax on an out-of-control carousel. Robert Walker has a great time playing the highly unstable Bruno: Farley Granger is a lot weaker as the hero Guy, which has the sneaky effect of making the audience enjoy Bruno's evil more. And there's a whole array of beautifully eccentric supporting performances, particularly from Patricia Hitchcock as Anne Morton's sister Barbara, a kid with a morbid sense of fun every bit as sick as her real-life dad's. 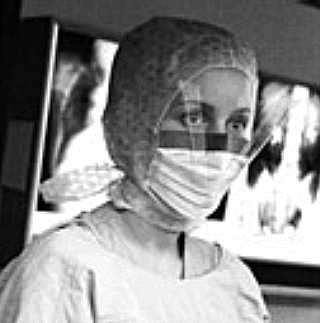 Originally brought up in Haiti, moving to New York after the murder of her family, Chase Dellal (Geno Lechner) now works as a medical examiner, trying to make sense of people's lives from what's left of them on the operating table. She's having an affair with Ralph (Bob Meyer), a judge with political ambitions which could be dealt a nasty blow if news of their relationship gets out. She's disturbed by the rising levels of corruption she encounters in her job, particularly in a current case involving the killing of a rich and powerful man by his abused wife. In the middle of this turmoil, an old friend from her time in Haiti appears in town (Dimitri, played by Jean-Michel Martial), and she has to make some choices about where to go from here.

Corps Plongés is a French/Haitian political thriller with very sketchy politics and virtually no thrills. It lines up a whole series of potentially interesting radical chic buttons - the situation in Haiti, the murderous racism encountered by black people in New York, the sexism experienced by Chase in her job, and corruption in the legal and political systems - and then hamfistedly fails to press any of them. If this was an American movie, Chase and Dimitri's earlier tragic background in Haiti would just seem like political window-dressing to give their characters some sort of interesting background: the fact that the director Raoul Peck is Haitian himself doesn't excuse the waste of a clutch of good story ideas in a lacklustre film. Still, the music's nice: composed by Mino Cinelu, it's reminiscent of the late period work of his former boss, Miles Davis.

Ken - Very sensibly, the rights to this James Ellroy book were purchased cheaply just before the huge commerical success of LA Confidential. That said, the seedier aspects of this film (including the alcoholic leading man, prostitutes, incest, police conspiracies and various gruesome murders) mean that the big studios have steered clear of it. It still doesn't have a US distributor, but that should change soon, because despite the very pedestrian beginning - with scenes like just any other Sam Spade tale, where the gunshoe is hired by a client who doesn't tell him all the facts - it's a very gripping thriller with more twists and turns than a rollercoaster. By the way, the director Jason Freeland claims that James Ellroy laughed all the way through when he saw it. Maybe Jason should have kept quiet about that...