I mentioned Spanish director Miguel Albaladejo yesterday. He's the one whose career I associate most closely with these LFF reviews: his first four films were released in the years 1998-2001 (the first four years of my LFF coverage here), and I got to review them all. But I suppose the same applies to Sweden's Lukas Moodysson as well. In 1999 we got his charming teen lesbian comedy Show Me Love, and in 2000 we got the even more hilarious tale of seventies commune dwellers, Together. It's not giving too much away to reveal that his third film takes a somewhat darker turn.

Lilya (Oksana Akinshina) is another one of Moodysson's teenage protagonists, living in the former Soviet Union. Her mum has swanned off to America to meet a new boyfriend, and the aunt put in charge is doing everything possible to make Lilya's life hell. The girl spends more and more time on the streets with her young friend Volodya (Artiom Boguscharskij), sniffing glue and turning the occasional trick to pay the bills. Just when it seems she'll be stuck in this life forever, Lilya meets Andrei (Pavel Ponomarjov) in a bar, and he reveals his plan to help her start afresh in Sweden. But is there a catch?

It's a bleak film, there's no question about that. But it's not bleak in an aggressive Lars von Trier way: the tragedy arises naturally from an accumulation of events, rather than feeling like a sadistic director's just piling it on. Lilya's a deeply sympathetic character, because time and again she shows how she's resourceful enough to make the best of any situation she encounters. Her only crime is realising too late that she's being screwed over by everyone with even the slightest amount of power over her. My main concern going into Lilya was the subject matter of teenage prostitution, and the risk that someone somewhere could be drawn to this film purely for titillation purposes: but Moodysson's scrupulously careful when filming those scenes, using a shooting strategy which reduces that risk to zero (and implicates the viewer even more in the process).

Despite the comparative lack of humour, this is still recognisably a Moodysson film. Once again he shows his incredible skill with young actors, while his hyper-naturalistic shooting style is enhanced by a couple of unexpected non-naturalistic touches for devastating effect. You knew his first two films were classics as soon as the end titles rolled: that wasn't the case for me with Lilya 4-Ever, but it's one of those movies that crawls all over you for hours after leaving the cinema. A dark film, but justifiably so (on the day when the British Government decided that grooming children for sex purposes might  [dead link] be a criminal offence eventually): and a brilliant one too. 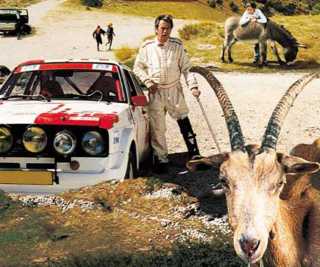 Rally driver Paul Braud (Patrick Bouchitey) is doing a practice run through Majastres, one of the most deserted regions of rural France. When his car breaks down, Paul and his female co-driver (Iliana Lolic) try to get help, only to discover that the few inhabitants of Majastres they can find are all potty. There's the bickering couple that runs the local observatory: a horny shepherd with strange powers over women: a film crew trying to make a Western: a group of soldiers who are convinced that Saddam Hussein has invaded the town: and a mysterious Japanese man watching it all through binoculars...

Writer/director Luc Moullet manages to bring all these disparate elements together eventually, as you'd hope: but he also throws in a couple of dozen more characters and self-consciously wacky situations on top, and the result ends up far too digressive to be coherent or funny. There are some nice individual gags, but they're swamped in a sea of forced zaniness which becomes self-defeating. At the end, Moullet even has a van pull up to take some of the characters away to the loony bin: and that's the sort of ending I was using when I was writing comic strips at the age of ten. A bit of a mess, really: and surprisingly draggy, considering it's just 81 minutes long. 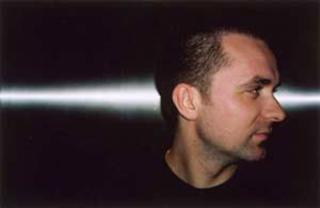 A first: I've got the seat next to the video camera that the NFT uses to tape these interviews. As a result, I spend most of the interview coughing my URL out loud in the hope of getting it permanently stored in the BFI archives. And those hyphens are a bugger to cough properly, I can tell you.

Danny Leigh from The Guardian is interviewing Moodysson here, and the director turns out to be incredibly hesitant but articulate: pausing for thought before answering questions, and not afraid to say "I don't know" if he doesn't. He's wearing a smart suit, amusingly offset by a couple of badges apparently depicting Bob Marley and Moodysson's wife. In the usual biographical beginning that these things have, Moodysson reveals that his move into filmmaking resulted from a mid-teen crisis during which he decided he had to do something, and his choices were lawyer, cook, or film director. Happily, he soon realised that he'd made the right choice. His first attempts at scriptwriting were somewhat surreal and violent - an early version of  Show Me Love had the girls living next door to a serial killer. He thinks the turning point came around the time of the birth of his first child: the point at which he started to take more of an interest in the outside world, and realised that the friendship of two girls was a lot more interesting than a serial killer.

It's interesting to hear the reasoning behind Moodysson's films always being told from a child's viewpoint. Children are more vulnerable and defenceless, more easily scarred by the problems of life than grown-ups. But there are things that you lose when you grow up - courage, imagination, open-mindedness - and it's good to be reminded of them whenever possible. Like a classic Swede, Moodysson uses the analogy of Lego: when he builds things for his kids, they're symmetrical and don't break, because that's the way his mind works. A child, however, will build all manner of wild things with no regard for whether they'll stay up or not. (Brilliantly, he returns to this analogy later on when talking about directing grown-ups and children, compaining that "when adults build their characters, they build them like their Lego...")

Inevitably, there's a lot of discussion of Lilya 4-Ever, which most of the people at the interview have seen already. The starting point was Moodysson's desire to make a film about "God's benevolence". On the surface it would seem that he's failed, but he comes up with a fantastically convincing explanation of why that's still ultimately the main theme: unfortunately, it's not one I can repeat here without ruining the movie for people who haven't seen it yet. But Moodysson also talks eloquently about where his religious beliefs fit into the context of the film ("I believe in God and Jesus, but I have doubts... it took me a while to realise that that's okay, because that's what belief is - you believe, you don't know"), the lack of political opinions in movies generally ("I'd even like to see right-wing Nazi movies... we need to hear all the voices out there"), and the perceived lack of hope in Lilya's story ("if it gets people angry enough to do something, it can be a tool for hope in the future"). An interesting man, and a good interview. 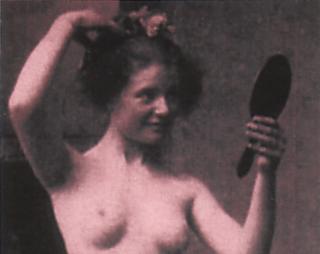 Archivist Michel Reilhac has put together an anthology of a dozen or so old-fashioned stag movies: short films which played for the entertainment of gentlemen in French brothels in the 1920s. The plots haven't really changed that much since then, and are merely excuses to get a couple of people together shagging, generally with an onlooker being dragged into the proceedings halfway through. A polite tea party turns unexpectedly into an orgy. An old man is given new life by the 1920s equivalent of Viagra. The story of Madam Butterfly is re-enacted with additional sodomy. A musketeer takes his pleasure with the serving wench at an inn, to the accompaniment of some groansomely punning food-based intertitles. (Watch out for the jus, missus.)