No, sir, I believe it is you who sucks ass. And your mother also. (Hey, this is fun.)

Suzanne Vega Fanclub, Do I have to write this every time, 08/12/2002
As you seem to be a little short on letters, I thought I would share with you another Suzanne Vega website, that has excellent quality streaming of some of her videos. Click http://suzannevega.com. It's great to be alive.

It's true, we've not had many letters here recently. Do you want Suze to flood this page with loads more links to Suzanne Vega sites? No? Then write, you buggers, write. 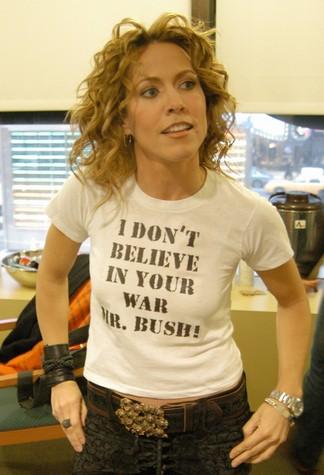 OK, Suze, I'll let you off with that one. Although it does worry me that we're having to rely on people like Sheryl Crow and Woody from Cheers for alternative viewpoints on the upcoming hostilities.

Chris, Victoria, Australia, 02/01/2003
Totally off topic and a tad late... but hey, you made it sound like you were desperate for letters!

Merry Christmas and a Happy New Year Spank! I'll assume both were good for you, as it's so much easier than asking and waiting for a reply...

I got the best present for Christmas (hmmm... perhaps that's obvious... does anyone get pressies for New Year? Apart from those that have their birthday on the new year, that is...)

Anyway... the pressie is a cowbell with the word 'shpadoinkle' engraved on it... spot the Cannibal fan!

I had a pretty good Christmas and New Year myself, thanks. The closest thing I got to a present like yours was one of those George Foreman grilling machine thingies, which I'll be using to burn some bits of cow in the very near future. And New Year's Eve was spent at a comedy show in London's glamorous Finsbury Park - nothing from your mate Boothby [dead link], but we had Ivor Dembina, Alan Parker Urban Warrior, and Ronnie Golden's band playing till half one in the morning.

Anyway, thanks a lot for responding to my pleas for mail: you're very considerate. Which will make it all the more difficult in a couple of weeks time, when I'll make an announcement on the site that may well SCARE THE LIVING CRAP OUT OF YOU. But we can talk about it nearer the time. Trust me, I'm a monkey.

"In my mind, there are two motivators for action and those are Love and Fear..."

Just followed that Sheryl Crow link [dead link] from the letters page - and was slightly disturbed to realise that Ms. Crow appears to be a disciple of Jim Cunningham.

I just couldn't let that one pass without comment.

That's this [dead link] Jim Cunningham, in case you didn't get the reference. I do hope that the BBG isn't suggesting that Sheryl Crow should insert the fear/love timeline into her anus.

I know I was saying the other day that I was desperate for mail. But there are fucking limits, you know.

Tsk. Haven't you won enough of the damn things already? Anyhoo, apologies for the delay: the two big end-of-year articles (the CD and the VidBinge) have taken a bit more time than usual to put together. Now that the VidBinge 2002 report is up, expect the CD review (plus competition) to follow in a week or so.

Sheryl Crow Fanclub (sorry Suze but this is a global emergency), HMS London Bus, 12/01/2003
Re: The BBG's letter of 03/01/03. Surely the makers of Donnie Darko haven't got copyright on the words 'Love' and 'Fear'; especially as they are ideal for explaining Bush's policy stance. I.E. USA LOVES the idea of owning weapons of mass destruction themselves, but FEARS the idea of anyone else doing so (not that Iraq does anyway). Or they LOVE making huge profits from oil, but FEAR additional competition in that industry (esp. as would happen if Iraq was allowed full trading rights with the rest of the world again).

Good on Sheryl Crow for putting her views in the public domain. Unless prominent citizens like her make a stand, America will remain a one party state, ruled by a maniac dictator, sleep walking its way into another imperialist/capitalist war.

Suze! Chill out! On your side, okay? Besides, be thankful that I didn't put up this Sheryl Crow t-shirt picture by accident... 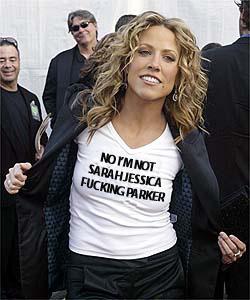 'Sheryl Rocks' Fanclub (Suze is still good though), Tiny PC, 19/01/2003
The only thing more crap than Freeserve broadband is Robbie Fowler (and we didn't want him anyway).

Explanation attached for our foreign readers.

I thought maybe my memories of cucumbers, gorillas and oral sex were actually some weird freaky dream I once had, but there really was a film called Thundercrack (it's not listed under imdb by the way).

I frequented the Scala very often during my two years living off Pentonville Road and still miss it.

I trust those of you who read my last letter realised I was only trying to be satirical. For those who didn't cotton on though, let me spell it out: ROBBIE FOWLER IS GOD.

Freeserve Broadband is still crap though!

Oh, I've given up on trying to follow this now.

Either I'm really dense, or... nope - that'd be it. Yup, a delayed response, but hey - I am actually curious about getting an explanation...

Re: Australian power ballads... you're gonna have to help me out here, Spank. I'm sure there was the potential to 'SCARE THE LIVING CRAP' out of me... had I have been smart enough to work out your message... though... going out on a limb...

'consequence of my Oriental travels in the past 12 months: who knows, maybe the 2003 CD will be full of Australian power ballads, or something' - does this mean you'll be gracing Australia with your presence sometime this year?

If so... well - I'll decide on my reaction after your response...

Here's the deal. In April, I'll be visiting Australia along with my favourite personal assistant, The Belated Birthday Girl. We'll be spending some time in Melbourne (while the Comedy Festival's in town), followed by a few days in Sydney. You've presumably worked out from the site that both of us like the odd spot of travelling, so we probably would have made into your part of the world at some point in our lives. But the simple fact remains that if you hadn't planted the idea of the Melbourne Comedy Festival in our heads back in your letter of 26/08/2002 (when we'd just got back from Edinburgh and were wondering where to go next), we wouldn't be going there this year. So it's all your fault, really. Sorry.

Suzanne Vega Fanclub, Blagdad, 09/02/2003
As I dedicate my life to bringing you the very best of the web, you might like to try MITTENS THE CUTE KITTY, and if you thought that was good try MITTENS 2 THE SEQUEL.

Matazone's always a good site for fun animated stuff. Their Little Goth Girl cartoons are currently popping up now and again on MTV2, so look out for those on your telly.

Charles Thomson, Stuckism International, London, 15/02/2003
Thank you for the link from your Turner Prize article. However, we have never complained about the lack of aesthetic beauty in art - authenticity, emotional engagement, communication, yes - but never beauty (not that I'm averse to it). We have asserted the need for truth as fundamental, and that truth is what it is regardless of what we want it to be. Sometimes it can be pretty ugly.

That's all well and good, Charles. But still, you really should see about getting yourself a half decent web designer some time.

The Cineaste, counting my winnings after a lucrative afternoon at the bookies, 16/02/2003
No communications for a while so I thought I'd furnish your readers with some intriguing but generally useless information. There's a restaurant local to me (well, Herne Hill) that's actually called The Three Monkeys (yes, really!). They even incorporate simian symbols into their logo, and the food itself is v good. They do deliveries but not sure if they venture to the foreign climes of north London.

On the separate matter of Robbie Fowler (apologies for belatedness of this) well of course he's a fine player, but that hardly seems to matter when the LUFC board seem hell bent on selling the whole bloody squad. Anyway, we're into the quarters of the FA Cup, and those *&^%$"£'s from Manchester aren't, so that's reason enough for a few drinks tonight.

Coincidentally, on the day The Cineaste sent this, I actually passed The Three Monkeys while travelling towards Dulwich Picture Gallery. Next time I'm in that part of town, I'll see about checking it out. Don't get me started on the bastard FA Cup, though.

Edward Eugene Baskett, Southern California, USA, 21/02/2003
Friends - Thought you might enjoy the first 3 chapters of my upcoming book, I LEAP OVER THEIR HEADS!, regarding General Electric (GE) and their reprehensible behavior. Please go to www.edwardbaskett.com and you will be taken to them.

According to his site, the potential audience for Edward's book includes "Christian Scientists, The European Union, Lawyers, Health Insurance Clients, Health Insurance Providers, GE stockholders, GE employees, Investigative Reporters, High School, College and University students and teachers, Gay Activists and HMO's". So I guess if you fit into any of those categories, you should read his story here.