Reviewed today: Faceless, Songs From Scotland, A Young Man Dressed As A Gorilla Dressed As An Old Man Sits Rocking In A Rocking Chair For 56 Minutes And Then Leaves 13.

Reviewed today: Funny Place For A Window, Stories In The Stone, Trevor Lock: Community Circle, A Toast To The People: Inua Ellams & Saul Williams, Your Tomorrow. 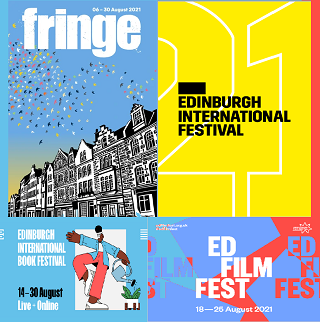 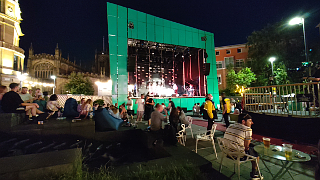 In previous Manchester International Festivals – look, just go back to part one of this piece and follow the links in there, I can’t be bothered typing them again – anyway, back then the hub of the event was Festival Square. For the other 102 weeks of the bi-year it was Albert Square, the big public space in front of the town hall. But at MIF time, it became a riot of food stalls, bars and tented stages offering mostly free entertainment.

This year was always going to be different, and not just for the obvious reason. Manchester Town Hall is in the middle of a massive refurbishment programme, meaning that Albert Square is closed off. So for 2021 (and probably 2023), Festival Square has relocated to the space outside Manchester Cathedral. It’s still offering booze, food and entertainment, but this time round entry has to be carefully controlled, with all visitors carefully spaced out into meticulously organised bubbles.

They would have managed it, too, if it hadn’t been for the inhabitants of Twat Island. 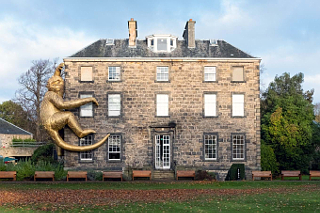 Art: To quote myself from two months ago: "So it looks like for the foreseeable future, these monthly roundups will regularly start off with whichever audiobook has been soundtracking our bedtime hot drinks. (Until we manage to get out and see some Art, I suppose.)" And here we are: some art, though you'll have to go to Manchester to see it (it's at the Science and Industry Museum until January 3rd 2022). Use Hearing Protection tells the story of the early years of Factory Records, from 1978 to 1982. It begins with an overview of the people and events that led up to the formation of the label, where the key tenets of its philosophy quickly become apparent. Produce the best-looking products possible: use local talent and industry at all stages of production: and never worry too much about the financial side of things. (That last one would come back to haunt them, of course.) The main part of the exhibition showcases the first fifty items in the Factory catalogue along with the stories behind them: the label gave numbers not just to records, but to posters, events, videos, company notepaper and a menstrual egg timer by the artist Linder. To justify this being in a science museum, there are a couple of interactive displays where you can play with a synthesizer and a mixing desk (bring your own headphones, and wipe all surfaces clean afterwards). It all finishes off with a lovely 40 minute loop of videos of Factory acts in performance, where the highlight for me was some vintage Durutti Column footage. If you're a fan of the music, you'll have a terrific time: even if you're not, it's a fascinating portrait of Manchester life in the late seventies.

Books: To quote myself from one month ago: "We started one book, and after a couple of days The BBG announced that she couldn't quite cope with listening to that particular author night after night. So, as a compromise, we're alternating evenings of that book (which I'll tell you about next month) with evenings of another, unrelated book." So you've probably been wondering for the past month, which audiobook did The BBG find so alarming that we had to alternate chapters of it with chapters of Bill Bryson? The answer is I, Partridge: We Need To Talk About Alan, the 2011 autobiography of Alan Partridge (written, it says here, "with" Rob and Neil Gibbons, Steve Coogan and Armando Iannucci). My listening companion assumed that spending too much time cringeing before bed would be bad for her sleep: myself, I think it's a much more complicated book than that. For a start, there's the sheer technical achievement of taking all the various strands of Partridge lore from On The Hour, The Day Today, Knowing Me Knowing You, I'm Alan Partridge and Mid-Morning Matters and knotting them into a single coherent life story. Then there's the various levels of reality to negotiate with: Partridge is the mother of all unreliable narrators, presenting everything entirely from his point of view, in some cases directly contradicting the 'facts' that we've already seen in the TV shows. But for me, it's also that Partridge has become less of a cringey character over the last dozen or so years, which I suspect is a direct consequence of the Gibbons brothers showrunning his life: they're not afraid to show some sympathy for him, and even let him occasionally win a confrontation in somewhere other than his own head. Finally, we have to acknowledge that this is our first audiobook that's an actual performance, and Coogan - who, by this time, had inhabited the character for close on two decades - gives it everything. Back of the net!

Movies: To quote myself from around April 1974: "Did you see that band on Top Of The Pops last night? That man with the high voice and the other one that looked like Hitler? No, I couldn't work out that bit of the maths homework, either." It's possible that the band Sparks were tied to a specific generation: if you were capable of listening to music in 1974 and heard those early singles, you were hooked. If Edgar Wright's film The Sparks Brothers is to be believed, if you weren't there in the seventies or you're not a musician now, you'll have no idea who Ron and Russell Mael are: his documentary is his attempt to convert the rest of the world. In the course of their half century in the biz, Sparks have had many ups and downs, and Wright's approach is to allocate screen time to every period equally, whether they're filling concert halls across the UK or waiting several years for a film project to come out of development hell. It helps the Mael brothers are fabulously entertaining as interviewees, but the several million other people Wright interviews all have interesting things to say as well. The film's in cinemas now: it may be a little too niche to be in there for long, so hurry. 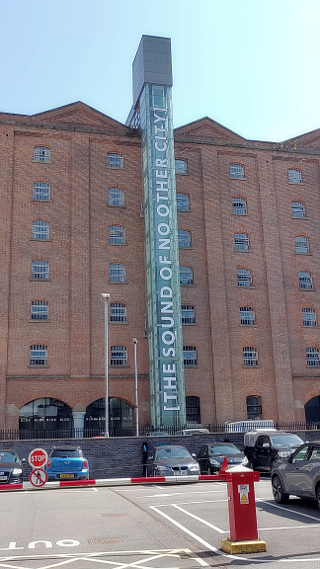