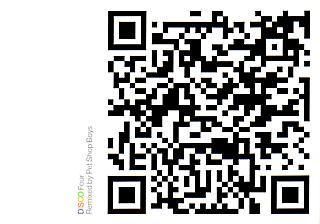 Oh, good, you found it. Congratulations.

Over the last year or two, I've started noticing patterns like the one you see here popping up all over the place - primarily in relation to Japanese things. They've been appearing on websites, in adverts, on the covers of J-Pop CDs, and even on the stamps I got in my passport for my last two visits to the country.

During a Tokyo shopping trip in 2006, I spotted that all of the clothes on sale had these patterns attached as well. It forced me to break through decades of male conditioning and ask someone to explain them to me - in this case, The Belated Birthday Girl's Japanese chums Miki and Taeko. And the answer they gave me was obvious when you think about it: they're bar codes, just displayed in a 2D format rather than as the traditional series of lines. The technical term is QR Code, so called because they give a Quick Response to scanning. Japanese mobile phones tend to come with a QR scanner built in, so anyone can wave their cameraphone in front of one of these things and extract the information held within it. That information can include website links, free text, or phone numbers, so you can see that this is pretty powerful technology.

With my curiosity satisfied, I pretty much stopped thinking about QR Codes for the next year or so, except for when I watched the last 30 seconds of this bit of mentalosity promoting an anime fansite. Which made me wonder a) why more people weren't so creative with the use of these codes, and b) why nobody in the West was picking up on them.

Enter the Pet Shop Boys. They've just released a new album - Disco 4, a collection of remixes of both their own and other artists' work. The image you can see at the top of the page is a promotional postcard doing the rounds for the album: and yes, that's a larger-than-life QR Code on the front. Obligingly, they've also included a link to the download site for the Kaywa Reader, which you can install on your phone to decipher the QR Code. (There's lots of other stuff to explore on the Kaywa site, including a number of sample codes to test your reader on: a charming tale of how it can be used in real life: and the ability to generate your own QR Code, which I've done on the Kaywa Kapers page you've presumably just come from.)

To be honest, the camera on my wheezy old Nokia 7610 isn't brilliant, so it has trouble reading some of the smaller codes I've passed in front of its lens. But the code on the promo postcard is oversized enough to work just fine. And when you eventually follow the weblink it generates, it takes you to a mini-site based around the extraordinary video for Integral, a remix of one of the Shoppies' own tunes. I don't really care for the remix all that much - it's frustrating how they've taken their best chorus in years and almost entirely removed it from the song. But it's also their most political song in years - looking at the controversy over the implementation of ID cards in the UK - and the video reflects that very neatly indeed.

The Integral video is based around a QR Code-style blocky grid, out of which images from surveillance cameras emerge, intercut with shots of the band themselves. If you're quick enough with the pause button, you'll also spot several dozen genuine QR Codes, all of which lead to websites with further information about what ID cards will mean to you and me. And if you really want to get involved, the mini-site has a link to - and this requires a shouted warning, I feel - a FIFTY MEGABYTE ACROBAT FILE CONTAINING EVERY FRAME OF THE VIDEO, so you can rearrange them into your own visual remix and post the results on YouTube. (You can also use the 2,408 page file to pick up on any of the QR Codes you missed in the video, as some of them are only on screen for a single frame.)

So hooray for the Pet Shop Boys: partly for tackling a current political issue head-on in a way that more so-called 'serious' bands would avoid, and partly for belatedly introducing QR Code technology to the UK. Because now I have a QR Code reader on my phone, meaning I will become utterably insufferable when we next visit Japan. I can finally scan in all those codes from Japanese CDs and websites, and see where they all lead. And - appropriately enough, given the subject matter of Integral - I can get a little bit worried about all that unreadable Japanese text that appears to be stored inside my passport stamp...

It was all going so well until I tried my second code (google from http://reader.kaywa.com/tryoutzone), which froze my phone and required a battery-removal-reboot. I shall persevere...