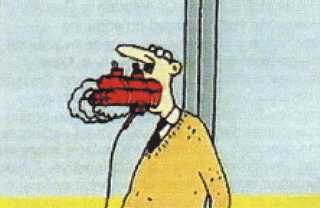 To begin with, an apology. I may have given the impression elsewhere on this site that Demon Internet are one of the best Internet Service Providers on the planet. However, given that they've not had any sort of coherent email service for the last week or so, I feel obliged to revise this opinion and inform you that they are USELESS SHIT-EATING BASTARDS. Apologies to anyone who may have sent me mail over the last few days, but it's sitting unread on a server somewhere at the moment: as soon as Demon get their act together and fix it, I'll reply to you. In the meantime, you may see the phrase USELESS SHIT-EATING BASTARDS appearing on here gratuitously until they fix it, and I apologise in advance.

Moving on, the first event of the day is McLaren Animation 1 at the Filmhouse. A regular feature of the Film Festival is a series of programmes of the best new British animation, in competition for the Post Office McLaren Award. In previous years this award has been determined by an audience vote, but there was no sign of any voting forms this year, so I'm not sure what the drill is this time. Anyway, as ever the programme is a mix of the professional and amateur, the funny and serious. An episode from the recent BBC adaptation of The Canterbury Tales stands out as the best-looking short, as a series of British and Russian animators bring a selection of Chaucer's stories to life, with the late Bob Peck doing the voice of the author himself. Easily the silliest animations on display are three from the series The Many Deaths Of Norman Spittal, in which veteran animator Bob Godfrey adapts the suicidal cartoons of Jeremy Banx into a set of 12 second films. Of the less famous work on display here, special mention must be made of Karen Ullman's Safety Catch, a splendidly visualised love triangle involving a tin opener, a cement mixer and a gun battling it out in a sports centre, and Iain Gardner's Akbar's Cheetah, a deft little fable about an Indian emperor's attempts to breed cheetahs in captivity, with a beautiful Indian visual style to it. 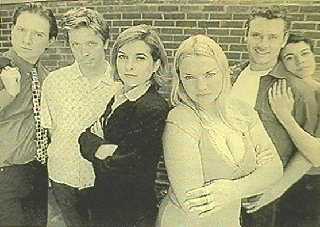 I've already done the joke about the difference between New Zealand and yogurt, so I won't embarrass our regular Kiwi correspondent Lee with it again. But NZ culture does get a reasonable look-in at Edinburgh, particularly when it comes from Dunedin, which is both a twin town to Edinburgh and home to Lee herself. Tomorrow night the Film Festival is showing Scarfies, a movie directed by Robert Sarkies, which he co-wrote with the presumably related Duncan Sarkies. Duncan's play Lovepuke is coincidentally getting an airing at the Gilded Balloon at the same time. It's a refreshingly cynical look at three different relationships, almost completely unrelated but all playing out on stage simultaneously. Janice and Ivan are trying to build a relationship while struggling to get over the hurdle of Ivan's former girlfriend: Nathan and Marissa seem to be the perfect couple, although their sex life leaves a lot to be desired: while Louise and Kevin are just out for a quick shag, despite one of them thinking it's something more than that. Sarkies intercuts their three stories with breathtaking agility, in some cases cutting from one story to the next after a single line of dialogue: and there's incredibly heavy use of flash cards and backdrop captions to provide an ironic commentary on what the characters are really thinking as they lie to each other and themselves. Congratuations to Rachale Davies, who adapted the play, directed it, plays the man-eater Louise and displays the most spectacular breasts I've seen on the Fringe so far this year.

First visit to the Book Festival this year is for a discussion entitled Urban Landscape In Fiction. Now that sounds like a load of pretentious old wank, doesn't it? But it wasn't. It certainly helps that the writers involved are Will Self and Andrew O'Hagan. Both novelists are probably as well known for their journalism as for their novels, although Self's career highpoint was probably being thrown off John Major's election campaign plane for taking drugs in the toilet. The contrast between the two writers is ultimately what makes this event work so well. O'Hagan, reading from his book Our Fathers, has an elegaic view of the old Glasgow in the days of the construction of the tower blocks. He has some interesting theories about how a city doesn't really come alive until it has an imaginative life: people don't accept it as a living space until they see it in fiction and build their own stories around it. Self, on the other hand, is incredibly cynical about London. ("I always find you reserve a special hatred for the place of your birth... one day I hope to visit all the provinces and hate them too.") At one point he insists that London isn't really a city at all, it's some sort of hallucinogenic fungus which its inhabitants consume in order to generate their own delusional fantasies about what it's really like. The tension between Self (who's definitely a performer when it comes to reading his own work) and O'Hagan (more humanistic, more of an actual writer) makes for an electrifying debate and a series of great exchanges. O'Hagan: "Sometimes I think I like buildings more than people." Self: "Well, you spend more time inside them, don't you?" Now this story requires a little buildup, so be patient. After a quick visit to Haymarket station to pick up Jon (a late arrival to the first shift of Spank's Pals), we head off to a restaurant which cannot be named, otherwise Cuba Norte would sue me. We get there at 7.45pm, which I calculate allows me plenty of time to eat before seeing Al Murray's show at 9.25. It gets to 9.10 and my main course hasn't arrived yet. In desperation, I ask if they can do my meal to go. Hence at 9.20 I'm sitting in the back of a taxi eating marinated steak with my fingers out of two paper plates held together with clingfilm. I arrive at the Pleasance with two minutes to spare before Al Murray's show, only to be greeted with the announcement that Al's partner is having a baby and the show's been cancelled, with apologies to any punters who can't make the next available performance (which takes place the day after we go back). Al, look, I love you, and congratulations to your girlfriend and all, but you USELESS SHIT-EATING BASTARD! (Hey, this could become a catchphrase.)

As a last-minute replacement, I accompany Lesley to Russian Gypsy band Loyko, possibly out of some sort of annoyance at Jack Straw's doorstep-shitting foolishness of the other week. (I realise that some of our foreign readers may misinterpret that last sentence as meaning that Jack Straw MP has been caught crapping in people's doorways. I like that as an ambiguity and I'm prepared to let it stand.) Anyway, Loyko have two fiddles and a guitar and bring a late-night audience to life with the sort of fast-paced folk tunes you'd expect.

Finally, the week's (first?) visit to the Gilded Balloon's Late And Live, which is the reason why this report is shorter than yesterday's, given that none of us made it into bed till 5am. The usual mix of comedy and music, held together by compere Ross Noble, who gets a real rapport going with the audience, to the extent that he gets two bald guys on stage to hold a head-painting contest while he persuades the rest of us to cough up the prize money. The atmosphere gets fairly raucous, with one or two hecklers persisting throughout the night (mentioning no names, Mr. Lag): Jim Rose does nothing but appear on stage and demand to be heckled for his crap jokes. Mind you, he does come up with one of my favourite anti-heckle lines ever: "Hey, I don't knock the sailor's cocks out of your mouth when you're working." Of the good comics of the night, Chris Lynam is his usual manic self, directing three audience members in a hysterical re-enactment of Frankie And Johnny, while Ed too-big-to-do-a-proper-run-of-shows-this-year Byrne is on fine form, suggesting a great prank to play in a supermarket. (Fill your trolley with booze and put a pack of nappies on top: when you get to the checkout and they tell you how much it all costs, offer to hand the nappies back.) The "soul" band in the second half of the show consists of three white guys in fake afros singing to a DAT tape, which is a great advert for the comforts of the bar next door, hence the hungover nature of today's diary. Sorry. Must go for a poo now.

Jon - All About My Mother is Pedro Almodovar at his best, possibly his very best. It has the usual mix of characters from the extremes of the sexual spectrum and, typical of his most accomplished work, the lead character is a middle aged woman battling against the world (admirably played by Cecilia Roth). What sets it apart is an emotional depth which I've not seen before in an Almodovar film.

Nick - Late 'N' Live is a 20th century version of the bear garden. This show has come to represent where comics either succeed or fail, where success is judged by how many minutes the comics last, sometimes in front of a hostile audience. The show last night proved a huge test for one of the best young comedians on the circuit, the compere Ross Noble, after some bizarre decisions on the lineup. As usual, a couple of young comedians were thrown to the dogs as the first acts, and proved woefully inadequate to cope: I won't bother you with their names. Then we had the bizarre decision to bring on Chris Lynam, who can only be described as a novelty act: more famous for sticking fireworks up his bottom than any great comic skills. He was followed by Jim Rose, whose sole intention was to publicise his latest circus show until the audience drowned him out in a torrent of abuse. Unfortunately this roused every drunk in the building to try and heckle indiscriminately, with cringeworthy results. Ross Noble battled valiantly to quieten the crowd for the main act, aided by several of our group berating the audience to shut the fuck up. Ed Byrne was the main act and although he made a big impression last year, he appeared to be on autopilot, recycling a lot of last year's material. With Ross Noble as the compere it proved to be of great entertainment value, although not for the faint hearted or easily offended. A must.

Jon - Elephant Juice is a watchable film, typical of the British genre of a group of friends trying to find the right relationship. Although slightly spoilt by some holes in the motivation of some of the characters, it passes an enjoyable hour and a half. A good film to see with your girlfriend/boyfriend.