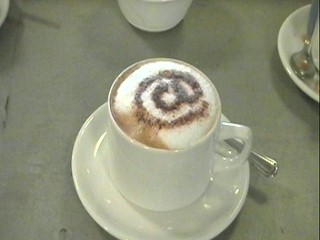 Now this is what I always think of as Festival weather: torrential rain and winds that would slice you in half quicker than a pissed-up skinhead with a straight razor. Still, at least there aren't any outdoor events scheduled for today. An early highlight is Mervyn Stutter's Pick Of The Fringe, a daily show that in previous years has consisted of a compere (Radio 2's Mervyn himself) and any seven Fringe acts that just happened to be passing by the venue at the time, regardless of quality. However, today's selection is astonishingly good. A few highlights at random: Sean Cullen asks Ken for a type of food, Ken chooses spaghetti, and Sean immediately comes up with a verse of a song describing how he would kill Ken with it. (It's rather complicated, but basically he would load up a seventeenth century replica cannon with dry spaghetti, invite Ken over to have a look, shoot him through the heart with it, and then remove the spaghetti an hour or so later when it had gone all soggy.) Baby Wants Candy improvise three numbers from an imaginary musical, derived from the audience-suggested title Whoops Vicar Are Those Your Cassocks. And Ed Byrne highlights the ridiculousness of mail theft being an act of treason (as mail in transit is technically owned by the Queen) by proposing to send a block of hash through the post and having the Queen busted for possession. "And I'd send more than an eighth of a gram, so technically she'd be classed as a dealer."

Following a quick session in the Cyberia net cafe to post the first diary (and yes, the chocolate on the cappucino really does look like it does in the picture) there's an early Sam Shepard play, Shaved Splits, receiving its European premiere. But Sheperd's really popular now thanks to things like his screenplay for Paris Texas, and this was written in 1970: why hasn't it been performed here before now? Well, because it isn't very good, obviously. Still, it's playing to capacity houses because it follows one of the classic Fringe rules: when in doubt, have a woman dressed in Agent Provocateur lingerie talking dirty. There are some interesting passages, but it's very obviously the work of a playwright who isn't quite ready for prime time yet. The main moment of interest comes from a major technical cock-up, when a character falls over saying "I've been shot" a good five seconds before the tape of the gunshot is heard. Take a bow, sound designer Matthew Gray. 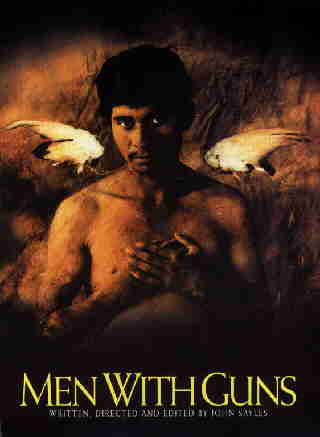 First major film of this Festival (ignoring Twelve Monkeys last night) is John Sayles' Men With Guns. I've always been fascinated by Sayles' career: it covers everything from hack monster movies like Alligator and The Howling to social dramas like City Of Hope and Lone Star, always with a surprisingly strong left-wing undercurrent for an apparently mainstream American filmmaker. Always one to take risks, Men With Guns is his first Spanish language picture. In an unnamed Latin American country, Doctor Fuentes (Federico Luppi) goes in search of a group of medical students, who he trained to give medical aid to the poor Indians in the villages. But as he travels from village to village, he finds that the doctors have disappeared, and the locals will only say that "hombres armados" were responsible. On his quest to find just one of his former students who hasn't suffered as a result of the political situation, he picks up a number of companions: a young orphan, a deserter from the army, a former priest. Sayles, as usual, doesn't let the politics get in the way of a ferociously compelling story. There's a morbid, sneaky wit that keeps the script afloat through the heaviest passages, and the cameos from Mandy Patinkin and Kathryn Grody (as an English-speaking couple who keep bumping into Fuentes) are hilarious. "Honey, what's the word for fajitas?"

(As a bonus, eating in the Filmhouse cafe bar afterwards, we spot David Baddiel and Frank Skinner. Skinner is drinking cappucino. Baddiel is eating a poofy little cake with a spoon just like a girl. Call themselves lads, do they?) 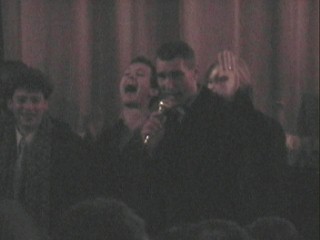 More men and more guns in the other film of the day, the much hyped Lock, Stock And Two Smoking Barrels. Movies fall over themselves on a regular basis to call themselves the Next Big British Thing, but this film has a reasonable claim to the title. Guy Ritchie's film will probably be called "Tarantinoesque" in the reviews, and you can tick off the reasons one by one: a story about a gang of lads trying to pull off a sting, heavily stylised dialogue, amazingly credible performances from people you'd have thought incapable of them (Sting, the late bare-knuckle boxer Lenny Mclean, and yes, Vinnie Jones). But instead of being a pale clone of contemporary American cool crime flicks, the humour, visual style (strange colour schemes and variable speed camera) and sheer sense of fun make it just so damn... well... British. And to top it all, it's got the best ending since... well, I won't tell you what it's got the best ending since, because that'd spoil the surprise. Lock, Stock And Two Smoking Barrels opens across the country on August 28th and is definitely worth a look. Besides, Vinnie Jones tells us all before the screening that he'll "do us" if we don't enjoy it.

And finally, Late And Live at the Gilded Balloon. As with Mervyn Stutter, this is a collection of Fringe acts that changes every day, so it shouldn't be so surprising that Ed Byrne turns up yet again. At least he does a longer set this time. "Whenever they play James' Sit Down at a student disco, all the students run onto the dance floor and sit down on it, because they think it's really really funny to do exactly what the record tells them to do. Imagine what it must be like being at college when your name's Eileen? 'Dear Mr Dexy, please find enclosed my dry cleaning bill...'" Also in the same show, Phil Kay walks his usual tightrope between comic genius and verbal incontinence: at one point he has a persistent heckler dragged up on stage and stripped naked, but by the time I've got my camera out he's got his pants back on again. Sorry. And an Australian duo called Scared Weird Little Guys manage to not only sing the words of Rawhide to the tune of Abba's Fernando, but vice versa as well. Then in the second half comes an Eighties tribute band called Space Invaders. I have to agree with the theory that Stephen Hawking puts forward in A Brief History Of Time, that the concept of time continuously progressing in a forward direction is a given constant throughout the universe, and one of the key advantages of this is that we never have to listen to any music from the bastard Eighties ever again. So off to bed.

Ken - There was an audience vote at the end of Lock, Stock and Two Smoking Barrels, and Vinny Jones checked my ballot paper personally on the way out. Luckily I'd voted it as excellent, and didn't mention the velvet suit and golf shoes he was wearing.

Jon and Nick - What were you looking at him for?

Sylvia and Nick - Lady Boys of Bangkok was very predictable, beautiful costumes but no surprises. The chap who played Sporty in the Lady Boys Spice Girls was better looking than the original.

Ken - Of course, bullets fly faster than the speed of sound, so a five second gap before you hear the shot is quite possible, really.

Need help. Who painted the painting used in the poster for Men With Guns?

Actually, I can answer this one, because I still have a copy of the Men With Guns soundtrack, which uses the poster art on its cover. A couple of credits from the booklet:

So it looks like it's this guy http://www.gonzalezpalma.com/ who took the original photo that Horton treated for the poster art.