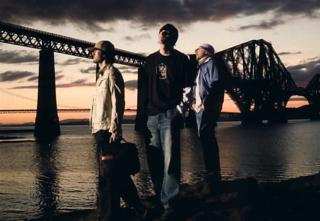 In what seems like an unusual violation of the natural order of things, I've left my first visit to the Traverse Theatre till Thursday of this week. The Traverse has always held a special place in my heart: since I first saw a play in its old Grassmarket site in 1989, and through the move to its splendid current location, it's always been the place to go for interesting new theatre during the Fringe. However, the Traverse and I have had a wee falling-out this year. I arrive about twenty-five minutes before the play, and order a ham and cheese sub from the bar. By the time they're making the last call for the play, my food still isn't ready, and I have to go into the theatre having paid five quid for a sandwich I'll never see. To add insult to injury, the play's director Richard Wilson - yes, that Richard Wilson - can be seen tucking into a plate of sausage and mash that he quite definitely ordered after me. I wonder if I should go up to him and tell him that I don't believe it, but there isn't time as the play's just about to start.

Happily, once East Coast Chicken Supper kicks off, that falling-out between me and the Traverse no longer becomes an issue. Written by Martin J Taylor (his first play), it's the story of three friends - Fred (Paul Rattray), Stew (Paul Blair) and Gibb (Garry Collins). Residents of a small town in Fife, they've known each other since school, and have set up a small supply business between them, the nature of which only becomes apparent gradually. About a year ago, Gibb just vanished suddenly, and has just turned up again tonight. With the nature of their friendship and their business changing, the three need to talk about what's happening. And over an evening built around a Chinese stir-fry, a bottle of single malt and a shedload of pharmaceuticals, that's what they do.

The Traverse's reputation for premiering new writing is second to none, and new Scottish writing is their particular forte. Like Gagarin Way a few years ago, this is a good example of the sort of thing they specialise in - tales of young lowlifers, told in dialogue that balances slightly theatrical over-eloquence with copious profanity, played in a rapid-fire style that recalls nothing so much as a sweary version of forties screwball comedies. And East Coast Chicken Supper is a prime example of this: beautifully structured, frequently surprising, and enthusiastically played by the cast. I've never seen anything directed by Richard Wilson before, though he's frequently to be seen in the Traverse audience during Festival time: he whips this through in just over an hour and a half and never lets the pace flag once, which takes some doing. Still jealous of his bangers and mash, though. 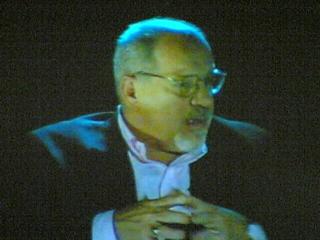 A small incident worth noting from yesterday's screening of Dominion: Prequel To The Exorcist. At the end of it, director Paul Schrader came on stage, and before he started talking he blagged a bottle of water from someone in the front row. "Think of it as a present to Mr Schrader for all those great screenplays he's written over the years," said Shane Danielsen, diplomatically failing to mention the not-terribly-good Schrader movie we'd all been watching for the last two hours.

A day later, Schrader and Danielsen are both back on the same stage for another of the Film Festival's Reel Life interview events. Unlike the Joss Whedon one a couple of days ago, this is a more traditional run through the chronology of Schrader's life and career - the Dominion debacle is only briefly touched upon at the start. That life and career deserves the full treatment, because Schrader has an extraordinary history. Growing up in a Dutch Calvinist community, he was prohibited from watching films, and didn't see his first one until his late teens. He quickly became obsessed with the medium, and started up a film club in his college, much to the dismay of his Calvinist elders. He started writing about film, and quickly became part of the inner circle of legendary critic Pauline Kael. During a particularly bleak period in his life, he channeled all his negative feelings into a screenplay called Taxi Driver as therapy: he gave it to Kael to read, and she was so shocked by it that she threw it in a closet and stacked things on top of it to stop the evil getting out. But she realised what a talent he had, and before long he was making his own movies and collaborating with directors like Martin Scorsese.

Schrader makes for an interesting interview - not because he's got a fund of amusing anecdotes (which is how these sessions normally work), but because he's got some well-thought out ideas about the medium, and where it's heading. Crucially, this isn't the grumbling of an old man complaining that the young people won't let him make movies the way he used to. Instead, he's acknowledging that all media have a natural lifespan, and that film may be reaching the end of its own. He points out that film tends to lag behind the other visual arts in terms of its development: there wasn't a cinema equivalent of what Warhol did until Pulp Fiction, and right now movies are falling out of favour in the same way that painting did several decades ago. He's very perceptive on the way that film has changed visually since he started in the business, citing Sidney Pollack's thriller The Interpreter as the most interesting movie of 2005 because it's filmed in what's recognisibly a 1970s style.

And he's enjoyably indiscreet about his last, problematic collaboration with Martin Scorsese, Bringing Out The Dead, which he reckons was fatally miscast. He wanted Edward Norton in the lead, but Scorsese went for Nicolas Cage, a move which quadrupled the budget to sixty million dollars - and according to Schrader, Scorsese felt he had to do that because he didn't see himself as a director of fifteen million dollar movies any more. "Generally when people have nothing to say, they say it louder. Or, in the movies, more expensively." Me-ow.

It's hard to know what to say about Stewart Lee's new stand-up show, 90s Comedian. Mainly because like last year's set, it's a tightly constructed, carefully scripted piece of writing, rather than the informal banter with an audience that stand-up tends to be nowadays. And part of the joy of this show is seeing that construction being carefully revealed bit by bit. So let's just cover the basics: Lee has had a difficult year, climaxing in the ludicrous hate campaign that blew up when Jerry Springer: The Opera was shown on BBC2, which actually made him ill for a few months. He talks about that campaign and his illness, and how he was touched when he woke up one morning recently to find dozens of messages from his friends asking if he was all right, but curious as to why they'd all chosen to do it on the morning of July 7th. And then, for the last half hour, he pulls it all together in ways that are literally indescribable. So I'll stop there. Go see him. 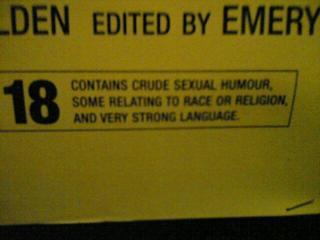 But I will say this: that last half-hour of Stewart Lee's set turns out to be the perfect curtain-raiser for The Aristocrats, a documentary film by Paul Provenza and Penn Jillette. It's nothing less than a study of the history and psychology of comedy, based around an analysis of the single most disgusting joke in the world. As jokes go, The Aristocrats is uniquely flexible; the opening couple of lines are standard, as is the punchline, but the middle section is basically left open for the teller to improvise, in the manner of a jazz solo. The only requirement is that the teller has to describe the most unspeakable acts they can think of.

Provenza and Jillette have interviewed a hundred or so comedians over the last five years, from ancient vaudeville veterans through up-and-coming new comics to the writers of The Onion. They each get to tell the joke in their own way, and the repetition points up some extraordinary things. When someone tells The Aristocrats, they're telling you the things they think are totally beyond the bounds of human decency. Incest and coprophilia are the main staples that come up over and over again, but people keep finding ways to surprise you, like the South Park guys working in a reference to 9/11 towards the end of their version. But at the same time, it's a psychological boot camp for the joke's audience (and the film's audience, of course) - how far can the teller go before they've crossed the line? Violence against women? Racial slurs? Or simply the act of telling the joke to your own child, as two of the comics do here?

The important thing to note here is that The Aristocrats isn't just an excuse to hear lots of famous and not-so-famous comics talk dirty for ninety minutes, although there's an undeniable pleasure in that. It's also a tribute to the power of language, the physical impact that mere words can have on people who listen to them. It's a study of what people find offensive, and why they find it offensive. How you react to the joke, and how other people around you react to it, is a huge part of the joke itself. It's refreshingly amoral, and I mean that in a good way.

Rose - Fateless (Sorstalansag) is a story about a 14 year old Hungarian Jewish boy's deportation to a series of Nazi concentration camps, and how he just survived thanks to the help of a caring fellow Hungarian, and the Americans arriving. It depicts the daily suffering rather than sensationalising the brutality. As someone who has read books about survivors of Nazi camps (eg The Road Less Travelled), the factual content was nothing new, but it was very convincingly acted. It was extremely frustrating that the final thoughts of the boy were illegible due to white writing on a bright background.

Sylvia and Rose - Kinky Boots shows the tensions of a provincial town and its acceptance of an alternative 'big city' culture, manifested in the production of kinky boots for cross-dressing men to save the existence of a shoe factory's jobs for the locals. The locals with the problems about it are mainly men. Predictable, corny storyline after the first 15 minutes, but Chiwetel Ejiofor clearly shines in the lead role which makes for a colourful, lighthearted, almost believable film (apparently it's a true story!). The director was determined to have a box office hit, and the box office will do well.

Rose - I disagree with the Mervyn Stutter review - I think Uncle Shitty is the new Tommy Cooper, and it takes real talent to be that bad on stage.