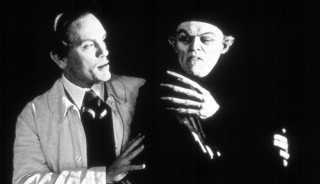 1921. FW Murnau (John Malkovich), Germany's greatest film director, has decided to take on the story of Nosferatu, an adaptation of Dracula but with enough changes to stop the Stoker estate suing his arse. His chosen actor for the role of the vampire is Max Schreck (Willem Dafoe), a student of the Stanislavski school who appears to be taking the whole idea of method acting to extremes: the rest of the cast only get to see him in his full makeup, and he only comes out at night. The intensity of his performance begins to freak out the cast and crew, particularly when the cameraman starts to feel a bit... er... anaemic. Just how far is Schreck going to immerse himself in his role? Who is he really? And is Murnau, the cinema pioneer par excellence, on his way to making the first ever snuff movie?

What a hoary load of old bollocks Shadow Of The Vampire is. But in a good way, mind. The only possible way this can be enjoyed is by taking it as ultra-black camp, rather as James Whale saw the Frankenstein movies according to Gods And Monsters. Gleefully forgetting to put the usual "all characters are fictitious" disclaimer on the credits, writer Stephen Katz and director E Elias Merhige (that's got to be an anagram, surely?) play fast and loose with the established facts to produce an utterly loony gory farce that still manages to be stupidly entertaining throughout.

The real star of the movie has to be production designer Assheton Gordon. It must have been a real challenge having to completely rebuild the sets after every take, given Dafoe and Malkovich's tendency to chew the scenery whenever they're on screen. Malkovich goes soaring Germanically over the top in a way we've not seen since that jewel thief movie, only to be outhammed at every turn by Dafoe's eye-rolling, fingernail-twirling Schreck. At one stage the latter even gets to devour a live bat, possibly in homage to producer Nicolas Cage's own cockroach-gobbling antics in Vampire's Kiss.

When the most restrained and underplayed performance in your movie comes from Udo bloody Kier (as Murnau's producer Albin Grau), then you've got some serious issues with the idea of realism. But here the campy overacting suits the tone of the script, even compensating for Eddie Izzard's traditionally crap acting style by casting him as a crap actor. Apart from the very occasional stab at subtlety (Murnau's promise to Schreck is to offer him immortality on film, a nice reversal of the usual deal), this is on the whole a hopefully intentional tongue-in-cheek romp, which is silly enough to even have you worrying about the end credits including a crew entry for "1st Assistant Director (1st Week)". What, did Schreck get him as well? 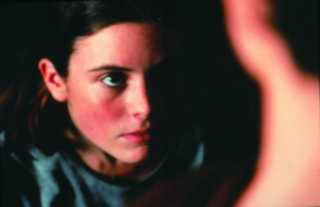 In the end, a lot of it's down to preconceptions. When Olivia (Lou Doillon) walks into the classroom on her first day, she's quite obviously a bad, baaaaaaaad girl. Her hair's in braids, she's obsessed with her dead sister, her mouth's just that little bit too big for her face in the Beatrice Dalle style. Fellow pupil Delphine (Maud Forget) is smitten with her instantly. The two of them start hanging out more and more, and Olivia opens Delphine up to areas of life she'd never previously encountered in her cloistered middle-class existence. They even pick up a pair of boyfriends, Laurent (Robinson Stevenin) and Alain (Maxime Mansion), who have plans to run away to Jamaica within the year.

Preconceptions again. If this was an American teen movie, you'd expect the foursome to have adventures, possibly get into trouble, but come out at the end older and wiser. Because this is French, there's an assumption that things will probably get a little darker than they would do normally. But you don't expect that halfway through, the boys will propose that the girls suck off four hundred blokes to raise the cash for their flight to Jamaica. And that the girls will agree to do it out of love.

The LFF programme describes this as "potentially exploitative material [handled] with consummate intelligence and sensitivity". Like hell it is. Alain Layrac's script (directed by Jean-Pierre Améris) brings to mind the recent controversy over Lars von Trier's Dancer In The Dark, which received similar accusations of sadistically putting its heroine through the wringer. But Bjork's torment in Dancer feels less exploitative, as she's capable of depicting the kind of love that could justify the level of self-sacrifice she ultimately endures. Here, Delphine is endlessly degraded for a love affair that makes no sense to anybody else apart from her, and (even more disturbingly) she shows no signs of being particularly traumatised by it. It all kind of sorts itself out in the end, and there's no denying how good the acting is: but this is such a grubby little stain of a movie that I can't even bring myself to use the cracking pun on Truffaut's Les Quatre Cents Coups that I came up with at its emotional low point. Except I just did. Sorry. 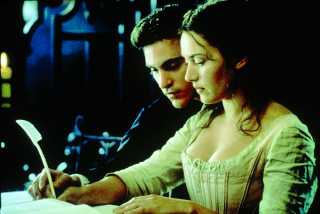 It's Starfucker Central at the Odeon West End this evening. Geoffrey Rush, Kate Winslet, Joaquin Phoenix, Michael Caine, Billie Whitelaw, plus younger stars Amelia Warner and Stephen Moyer, plus writer Doug Wright and director Philip Kaufman, are all in attendance for the world premiere of Quills. (Kaufman giving a particularly gushing speech in praise of his mostly British cast and crew.) Not to mention the presence of a large number of Spank's Pals in the audience, as well as a good helping of the Film Unlimited posse (nice to finally meet you, Withnail). With this level of star power in a single room, it's a good job that the film lived up to it.

It's 1807, and the Marquis de Sade (Geoffrey Rush) has been locked away in a Paris asylum for the safety of the French people. Of course, it isn't working. Under the lax regime of the priest Coulmier (Joaquin Phoenix), de Sade continues to write, and with the aid of laundry maid Madeleine (Kate Winslet) smuggles his smut out of the asylum for subsequent publication. Enraged by this, Napoleon engages Dr Royer-Collard (Michael Caine) to try and cure de Sade of his supposed malady (though the Marquis insists that his writing is actually a cathartic cure for it). As his freedoms are taken from him one by one, de Sade continues to invent new ways of publishing his thoughts while plotting to take revenge on his captors.

Doug Wright adapted this script from his own stage play, and some traces of its origins remain, notably in the reasonably small number of locations and the epigrammatic style of the dialogue as the moral issues of de Sade's right to freedom of expression are debated. But the film never feels talky: Wright pared his play down to the bone, revealing in the post-screening Q&A the one thought that kept him going as he cut more and more of his favourite lines: "there are no great films of George Bernard Shaw plays..." Having a cast as wholly excellent as this helps to bring the script to life too, from the leads mentioned above to the familiar British bit part players who play de Sade's fellow inmates.

The tone is beautifully judged throughout. For the first two thirds of the movie it's played at the level of historical romp, to lure us in and titillate us with occasional bursts of naughtiness. But it gradually becomes darker in the last half hour, as we're forced to accept the moral consequences of de Sade's acts, and the real human cost of his philosophy. Kaufman (who covered similar literary and erotic territory in Henry And June ten years ago) pulls all of this together into a magnificent two hours of rip-roaring entertainment, which still manages to raise interesting questions about why society needs people who push at the boundaries of what's acceptable, be it Marilyn Manson or the Marquis de Sade. We've got the first great film of 2001 right here.