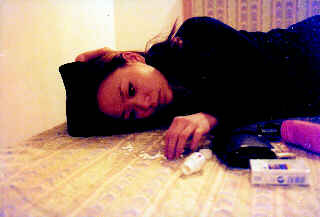 Today we raise a clenched paw in solidarity with the BFI workers who were protesting outside the Odeon Leicester Square on Wednesday night (as reported by Old Lag and, er, nobody else). The staff at the British Film Institute have been having issues with cuts in the organisation for some time - sadly, the effects of these cuts are now starting to trickle down to mere members like meself. Case in point: for the first time in living memory, this year's LFF will not be accompanied by a Souvenir Programme, the large book which gave cast and crew details for every film in the festival. Apparently it's been decided that it's just too expensive to produce nowadays.

It's a false economy, if you ask me. It's all very well saying that people can look up this sort of information on the Internet Movie Database, but in many cases they can't, particularly for foreign and low budget films. (Have a look at the available cast and crew details for Seafood as an example.) For my part, I want this information because I want to get the research right for these reviews: but in general people want to have some background details on the movies they're seeing, and we've lost an important resource for that. Not to mention a useful source of stills for these reviews, as well. (Be warned that if a film comes along which I can't find a still for, its review may have to be accompanied by a photo of me pissing on the National Film Theatre.)

Having said all that, Seafood only really has two people in its cast, so research isn't too much of an issue here. It's set in the sort of Chinese coastal town where people come to die. Literally: the cops are starting to get fed up of finding people cluttering up the town's hotel rooms, wrists slit and clutching sheaves of bad poetry. A young Beijing hooker (Jin Zi) has rolled into town to take her own life, and a local cop (Cheng Taisheng) takes it upon himself to do everything he can to stop her. His methods range from giving her friendly lectures on the beauty of life, to threatening to rape her corpse if she dies. Is this the sort of person she wants giving her guidance?

Seafood runs at a pace so slow, it's positively Iranian. In fact, I suspect there's some sort of homage to Abbas Kiarostami's A Taste Of Cherry going on here, particularly in the cop's recurring riff on how good seafood is the best reason to not kill yourself. It's well acted by the two leads, and shot in a gritty hard-edged style (it's very hard to tell if some or all of it was shot on video). Unfortunately, Zhu Wen's elliptical storytelling style means that darker hints about the policeman's character are dropped but never followed up, to somewhat irritating effect. And though the disconnected coda kind of makes sense in the context of the movie, it's not an entirely satisfying way of wrapping up the story. Then again, that could be a homage to Kiarostami as well... 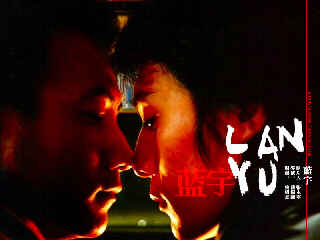 In the same way that the Western gay community has reclaimed the word 'queer' for itself, the Chinese gay community has cheekily done something similar with the word 'tongzhi', the old Chinese Communist term for 'comrade'. So it was pretty significant when an author calling themselves Beijing Tongzhi released a novel called Beijing Story on the Internet in 1996. The first serious exploration of gay life in China, its breaking of the taboos on homosexual themes meant underground publication was the only option available, and the identity of its author has never been made public. (Although according to Yongning Zhang, producer of this film adaptation, she's in her twenties and female.)

It's a simple story at heart. Student Lan Yu (Liu Ye), desperate to make ends meet, takes on the businessman Chen Handong (Hu Jun) as his sugar daddy. Initially it's purely for financial reasons, as Handong pays the student for sex and showers him with gifts of clothes and such. ("If I wear these to college, they'll think I'm Japanese.") Gradually the relationship develops into something much more than that.

Lan Yu is directed by Hong Kong filmmaker Stanley Kwan, last seen at the Festival exactly three years ago with Hold You Tight. Since he came out in the mid-90s, his filmmaking has gone from strength to strength: he's no longer sublimating his impulses with tales of hetrosexual doomed love like Rouge, but going ahead and filming the real thing. As with the novel, the movie had to be made underground without the backing of the Chinese authorities: but it doesn't show. It's lushly shot with excellent performances, especially from Liu Ye as the student who has to grow up quickly in a very short amount of screen time.

The script is a particularly smart piece of work: the story leaps ahead in time frequently, and challenges us to keep up and fill in the gaps. The period is kept relatively uncertain, apart from one horrifying moment when we suddenly realise it's June 1989. ("They're clearing everyone out of the Square tonight.") If there has to be a criticism of the story, it's in what one audience member referred to as the 'convenient' ending: but it's tailed with a final shot whose loopy kinetic beauty overcomes all your concerns about it. Not a hope in hell of a Chinese cinema release for this one, sadly, though producer Yongning Zhang claims he's sorting out the pirate VCDs already. 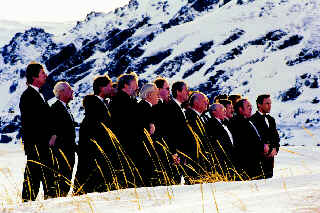 I get this sort of thing all the time, of course. People at work ask me what sort of films I'll be seeing during the Festival. I tell them I'm looking forward to seeing a documentary about the Berlevåg Male Choir from Norway. They start backing away from me very slowly. Their loss.

Knut Erik Jensen's documentary has been compared to Buena Vista Social Club in many quarters, and there are certainly structural similarities. Like that film, interviews with the old geezers in the choir (at least one of whom is 96) are intercut with footage of them performing. Jensen's idea is to film them in the beautiful surroundings of their town of Berlevåg: except he insists on doing it in some of the most spectacularly horrible weather imaginable, all icy gusts of wind, waves crashing against the rocks and arctic blizzards. Somehow the songs come through all of this: they tend to be on the subjects of the love of God, the love of Norway or the love of God for Norway, apart from one amusing digression on how much fun troll parties are.

But despite their musical excellence, it's the interviews that make this film, as a community this isolated has a fair few characters in its midst. There's the church organist, an agnostic who gleefully admits "I'm a multi-instrumentalist, but I'm not particularly good at anything, not like Paul McCartney." There's the former drug addict who spent his youth singing loudly at landing aircraft, on the off-chance that a talent scout may be on one of them. And there's the one who shows off his bedroom (despite his wife's protests) saying "it used to be a factory, but now it's more of a museum." There's always a risk with this sort of film that the director ends up taking the piss out of his subjects, but these guys are perfectly happy to do it for him themselves.

As with Buena Vista Social Club, there's a touching finale where the group leaves town to perform in another country, in this case Russia. They argue passionately about the damage the Russians have caused to their land: the hardline Communist in the group defends them aggressively, but still is reduced to tears when he sees the local war memorial. At the venue, the choir is so nervous they can barely perform properly in rehearsals. Can they get their act together in time? Cool And Crazy is getting a UK release in February 2002, so go see it and bloody well find out for yourselves. It's hugely affectionate, loaded with charm, has a lot of hummable tunes, and (as my companion pointed out) is refreshingly free of vaginal mutilation compared with last night's film. Don't miss it.

Old Lag - What a jolly film. Directed by Ismail Merchant as a Merchant & Ivory production. It is based on the recent Nobel Prize winner VS Naipaul's first novel. The drama is set in the Indian community of Trinidad during the 1950's. This community existed because the British Empire had previously imported Indian labour to work the West Indian plantations. The format is of a biopic. The rags to riches rise of a young man from an illiterate Indian village community to the top of Caribbean politics. He does this through education which is greatly admired in the Indian villages, his determination to write religious and self help books, and perhaps the Indian propensity to adopt a Guru. There is much good humour with the people around him and wise words from the older generation. At the top of his political power he is awarded an MBE but realises he is a figure head who has ceremonial duties but no power. Never mind, he has a devotee who will carry on the fight to independence. Lush views of the Caribbean. What a jolly film.

The Cineaste - An intriguing, slightly quirky little number.  Rather melancholy mood of the storyline, together with longish scenes with little dialogue, create some good mood and atmosphere.   The prostitute's character is mainly v silent and therefore unresponsive, which can be rather irritating, but can be interpreted as a reflection of the rather glum world of a member of her profession working at the lower end of the hierarchy.  Straightforward plot, but some arresting twists towards the end. And finally, any Chinese film which has a scene where a TV out of shot is playing, of all things, the Match of the Day theme tune (!!!), has got to be worth at least half the price of admission just for that.  Star rating: three.