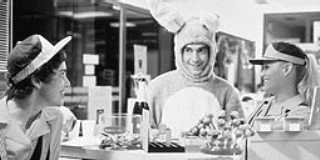 The First Night Of My Life follows the adventures of a dozen or so characters as they go backwards and forwards across town on the last night of the century. Manuel (Juanjo Martinez) and the heavily pregnant Paloma (Leonor Watling) are trying to get to her father's house in a series of malfunctioning vehicles. Paloma's father (Emilio Gutiérrez Caba) has his car stolen by Johny (Carlos Fuentes), the world's politest car thief. Johny's girlfriend waits on the streets for him to pick her up, while his younger brother is out stealing electricity for the family's slum home. Two men dressed as a rabbit and a lobster chat up a pair of petrol station attendants. And through all this, three Germans are driving around in a Volkswagen van getting more and more lost.

Director Miguel Albaladejo and co-writer Elvira Lindo handle all these plots deftly, and use a series of increasingly ridiculous coincidences to bring them all together in various combinations before the midnight chimes that mark the beginning of the 21st century (assuming the 21st century begins in 2000, of course: Johny and his dumb mate discuss this at one point). It's extremely funny and charming, with a nice eye for the absurdities of normal life: Leonor Watling, in the question and answer session afterwards, suggested the film was more Italian than Spanish in its feel. You feel that New Year's Eve 1999 will probably be closer to The First Night Of My Life than to Strange Days. I'd like to hope so, anyway. 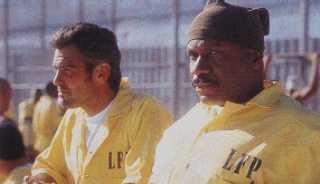 Genuine quote from one of the staff at the LFF ticket booth in Leicester Square: "You want two tickets for Anthracite, did you say? Oh, sorry. We must get some holes cut in this glass some time."

It's taken years for Elmore Leonard's novels to get the film adaptations they deserve, but after Get Shorty and Jackie Brown they do finally seem to be happening. Out Of Sight re-unites some of the production crew from Get Shorty (including producer Danny DeVito and screenwriter Scott Frank) and adds director Steven Soderbergh, who at this stage in his career is probably desperate to be remembered for more than his first film (sex, lies and videotape, which surprisingly was nine years ago). If nothing else, at least you can't call Soderbergh a one hit wonder after this one.

Having just seen a film with the world's politest car thief, it's nice to see George Clooney playing Jack Foley, the world's nicest bank robber, first seen pulling off a heist armed only with a manilla envelope and a cute smile. However, when he screws up the getaway he ends up doing time in Miami. He plans an escape with his former jailmate Buddy Bragg (Ving Rhames), double-crossing some of the enemies he's made in prison in the process. The escape comes off as planned with one complication: federal marshal Karen Sisco (Jennifer Lopez) gets in the way and ends up in the boot of the escape car along with Foley. Given the non-ugly actors involved, it isn't too surprising that a mutual attraction develops despite everything.

Foley and Bragg dump Sisco and start to work on a plan to shake down a rich stockbroker (Albert Brooks) that they met during an earlier stint in prison, bragging about the stash of uncut diamonds he keeps in his home. Unfortunately, Maurice "Snoopy" Miller (Don Cheadle), one of the convicts that Foley screwed over during his jailbreak, hears about this and is looking for revenge and a cut of the proceeds. Sisco joins the task force assigned to recapture Foley, but her feelings for him start getting in the way of her job...

Out Of Sight is a ridiculously cool movie, and interestingly it's a different sort of cool from that shown by Get Shorty and Jackie Brown. The narrative does a couple of interesting twists and turns timewise, with some carefully placed flashbacks: we don't realise how the opening robbery fits into the whole scheme of things until quite late in the film. The script is neatly aware of its own limitations and is quite happy to send them up: so when Foley and Sisco chat about Three Days Of The Condor while locked in the car boot, and complain how implausible it is that Redford and Dunaway fall for each other so quickly, you don't mind that their own relationship is developing at a similarly ludicrous speed. Similarly, one of the most ridiculous deaths ever seen in a Hollywood movie is carefully set up by Foley's story of a clumsy bank robber's attempt to do a raid using fake nitroglycerine.

And of course, the cast is terrific. Clooney and Lopez are an incredibly enjoyable couple to watch, Ving Rhames is the ideal best buddy, and all the supporting roles are given some brilliantly quirky dialogue to play with, from Catherine Keener's explanation of the sawing-a-woman-in-half trick to Dennis Farina's reaction to an FBI agent wearing a shirt with FBI in big letters on the front: "Do you have another one that says 'UNDERCOVER'?" Best of all are a couple of sneaky unbilled cameo appearances, which carry on Elmore Leonard's tradition of having characters from one book pop up briefly in another. I can't see any possible objection to the London Film Festival screening mainstream Hollywood product when it's as good as this. 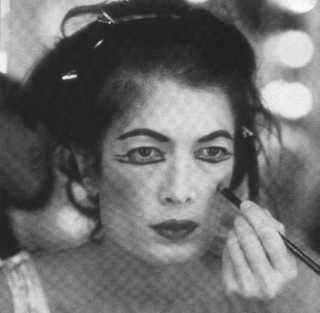 Canadian director Robert Lepage is probably better known for his visually stunning theatre epics rather than his films (although his debut movie The Confessional made a bit of a splash four years ago). I didn't realise until the opening credits rolled that his latest film is actually adapted from a section of one of his plays. I saw The Seven Streams Of The River Ota back in 1994 at the Edinburgh Festival: it was only a work in progress then, three completed acts out of a proposed seven, following a photographer as she got involved with all the major events of the twentieth century. (Lepage eventually completed it in 1996, and it played in a number of cities, including London.) I don't think the material subsequently reworked in Nô appeared in the version I saw, although a couple of motifs look very familiar, such as the use of a photo booth by a number of characters and the references to Hiroshima.

Nô effectively gives you two stories for the price of one: one's set in Quebec and shot in black and white, the other is set in Osaka and is in colour. It's 1970, a time of political unrest in Canada: Trudeau has virtually declared martial law and dissidents are being arrested. In this climate, Michel (Alexis Martin) and his friends plan to detonate a bomb to make their views heard. Meanwhile, his actress girlfriend Sophie (Anne-Marie Cadieux) is in Japan, performing in a Feydeau farce as Canada's contribution to Expo '70. She's just discovered that she's pregnant, and is unable to decide whether or not to stay in Japan and have an abortion, while trying to cope with the attentions of her co-star and the Canadian Ambassador.

Nô is a lot funnier than Lepage's other work, but still manages to be extraordinarily smart with it. The transitions between the two stories are beautifully done, particularly the switches from colour to black and white and back again. There's a brilliant gag involving a time bomb and the 14 hour time difference between Canada and Japan. And the climax of the film is a very typical piece of Lepage's visual magic, as Sophie's life gradually turns into the Feydeau farce she's been performing in. All this and we got to see Matt Damon as he turned up at the Odeon for the following screening of Rounders. Though you shouldn't expect that to happen when you go to see Nô.

Ken - There is a danger that this film will be dismissed as another Lolita. But if anything, it's a much better film, less voyeuristic and more thoughtful. The director thinks it's unlikely that the film will ever be released in the US, on screen or on TV, despite the fact that it only rated a AA rating in Canada (meaning 14 year olds could see it). It probably won't get a big release in this country, but Film Four should take a look: it deserves to be seen.

Rob D - The Blue Summer is to narrative film what William Burroughs is to narrative books; namely this is a two and a half hour film with no plot whatsoever - I could have missed half of it and I wouldn't have known the difference. The film is wholly made up of two people reading letters they have exchanged, sometimes accompanied by images which match the dialogue (talk about country pub has film of country pub), and sometimes not (talk about some vague concept of 20th century consumerism and advertising is accompanied by film of rockets bursting into flames on the launch pad). At one point the film consisted of William Shatner singing (sort of) How To Handle A Woman; most of the audience giggled but seemed to feel rather sheepish at doing so - was the film trying to make a serious point or just taking the piss? I left after two hours as I needed to catch another film; by that time a third of the audience had left and the woman next to me was snoring loudly in her sleep.  This was either a cutting edge experimental film or a complete load of bollocks; I don't know which and frankly I don't care.