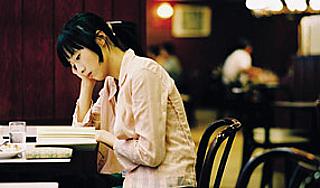 So a couple of nights ago, a few of us were having a beer in the Hand and Racket, on one of those rare evenings when they could be bothered to get off their arses and serve customers. And Old Lag mentioned that he'd been to see the Chinese film Uniform, which The Belated Birthday Girl and I had caught earlier on. "What did you think?" we asked him. "Oh, it was okay, but a bit slow," he replied. And we laughed and laughed and laughed. By this final day of the Festival, I think I've probably earned some sort of black belt in Slow Oriental Cinema. Anyone who considers Uniform or 2046 (see below) to be lacking in incident obviously hasn't seen, say, Tang Poetry or Tony Takitani, which are serious masterclasses in funereal pacing (though the latter works a hell of a lot better than the former).

The same applies to more or less any film by Taiwanese director Hou Hsiao-Hsien, who's garnered a reputation for this sort of thing. Cafe Lumiere doesn't do anything to challenge that reputation. It's the story of Japanese girl Yoko (Yo Hitoto), who's just come back home to Tokyo after spending some time in Taiwan. Aside from occasional strange dreams about goblin babies, her life is mostly taken up by her research into the life of Taiwanese composer Jiang Wenye. She's assisted in this by her good friend Hajime (Tadanobu Asano) - bookshop owner, source of arcane knowledge, and the coolest trainspotter on the Yamanote Line. There's one more detail I could mention at this point, but if I did then you'd know the entire plot of the film.

Hou Hsiao-Hsien was last mentioned here three years ago in connection with Millennium Mambo, a fairly dull look at the lives of Taiwanese teenagers. His new film moves just as slowly and has just as little going on, but somehow it's more enjoyable, and feels less smug about its slowness. It's nothing to do with the character of Yoko, who looks good in a hat but is pretty much a blank slate: the closest she gets to a character beat is when her parents come to visit, and are horrified by how empty her fridge is. Part of the appeal may be down to the Tokyo setting, and in particular the fetishisation of its transport system: not just in the sequences of Hajime making minidisc recordings of station noises, but in the motif of train travel used throughout. It's a deliberate nod to the work of Japanese director Yasujiro Ozu - the film was made specifically to commemorate the centenary of this birth. As a result, Ozu fans can also look out for the use of long takes and a static camera, though these are usually a characteristic of Hou's work as well. It's quite possible that my own interest in Tokyo may be the only reason that this is the first Hou film I can say I've enjoyed throughout, but that's a good enough reason for me. 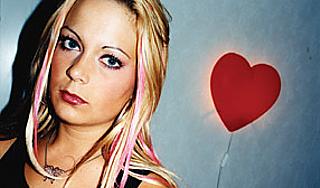 What exactly happened to Lukas Moodysson? Was he sexually abused shortly after the premiere of Together, or something? It's difficult to see how in four short years he's moved from the warm humanism of that film, via the hard-hitting polemic of Lilya 4-Ever, to this degrading bit of nonsense. It's certainly a technical leap forward from his earlier films, with some of the editing and sound mixing verging on the avant-garde. But his concern for his characters (and the audience) appears to have been replaced by a desire to alienate them with piss, puke and closeups of genital surgery.

Once in a while Moodysson briefly pulls back, in an attempt to see the people struggling to reveal themselves under the degradation: but it never lasts long. And the frequent attempts to blur how little (if any) of the story is real simply alienates us from it even more. As does the foolish design decision to fill the set with branded products, the labels of which then have to be messily pixillated out (as far as on-screen censorship goes, there's about ten times more done on pack shots than on cum shots). It's all a bit of a mess, and does leave you wondering if Moodysson's early work was just an accident. 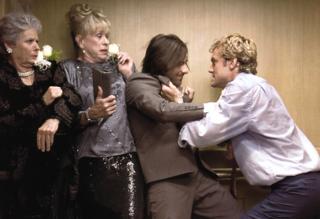 It's been a while since I last did a Closing Gala, due to a combination of rubbish film choices and high ticket prices. But I have to admit, they do give you an event for your £25 admission. We get a goody pack consisting of a Haagen-Dazs ice cream, a bottle of water, a souvenir programme, a Times supplement and a t-shirt that appears to be made to fit a four-year-old. There's an entertaining opening speech from BFI Chairman Anthony Minghella, who complains about how hard it is being the son of an ice-cream maker and having to go to Haagen-Dazs for sponsorship. There's the usual collection of end-of-festival awards, many of which pleasingly go to films I've already mentioned here: the Sutherland Trophy goes to Tarnation, the FIPRESCI Award to Aaltra, and the Satyajit Ray Award to The Woodsman. Jon Brion repeats his performance from last night of the song Knock Yourself Out, ensuring that it's now going to be stuck in my head for at least the next fortnight.

And somewhere at the end of all this, we get David O Russell's new film. Albert Markovski (Jason Schwartzman), head of an ecological group called the Open Spaces Coalition, has experienced a strange coincidence - on three separate occasions recently, he's met up with the same tall African man. What can it mean? To find out, he consults existential detectives Bernard and Vivian Jaffe (Dustin Hoffman and Lily Tomlin), who specialise in investigating people's lives to help them understand them. The Jaffes base their investigations around the concept that everything in the universe is connected, but Albert can't understand why they're spending so much time looking into his connection with Brad Stand (Jude Law), an executive at the Huckabees department store who's muscling in on the Coalition. Meanwhile, he also meets up with the Jaffes' nihilist rival Caterine Vauban (Isabelle Huppert), and a client of theirs who's defected to her, fireman Tommy Corn (Mark Wahlberg). And let's face it, a nihilist fireman is a dangerous thing to be.

I Heart Huckabees - and I can't be bothered looking up the ASCII code for the heart symbol, so just imagine it - is another one of those films that people are going to either love or hate. And with respect to Old Lag, who after the screening was using the word 'twaddle' like it was going out of fashion, I'm firmly in the 'love' camp. The central concept isn't a particularly new one - after all, Douglas Adams invented Dirk Gently and his Holistic Detective Agency nearly twenty years ago, though Gently used the interconnectedness of all things to solve real crimes rather than existential dilemmas. And I have a horrible feeling that the philosophy used here might fall apart completely if examined too hard. But to be honest, watching the film is so much fun that you don't want to think about that.

The key thing Russell brings to the movie is a tremendous sense of playfulness, hurling all these ideas at the screen and happily allowing you to consider them with whatever depth or shallowness works for you at the time. It's beautifully acted by an all-star ensemble cast (though only Huppert turned up to the Gala, which is a shame), and the pretty Jon Brion score ties it all together into a perfect Festival closer. Knock Yourself Out is repeated again in the final minutes of the closing credits, so I guess I'll have to buy it now, dammit.

Maggie Cheung Fanclub [oh, go on, guess...] - In my over eager attempts to see more of Maggie Cheung, I did not read the small print attributed to the film 2046 and was bitterly disappointed to find the director's latest cut, of which there have been many, had reduced her appearance to a cameo role. Not that I even saw that fleeting glimpse, I left after barely an hour feeling robbed again. What with Maggie having been totally wasted in the recent release of Hero, this was more of a cold shower for the fan club. To think I could have sold my ticket to the bloke at the end of the returns queue outside Pizza Hut and tucked into a super supreme, and not waste my time with this stuff!

The film started entertainingly enough, a bloke on his uppers writing a Sci Fi story that sort of parallels his own story, drifting through life without any great purpose, seeking entertainments (or women in his case) that never satisfy him and so he moves on. If I had to sit through another 'meaningful’ shot of a glowing cigarette end, I was going to scream. Strangely I have met people who spend all their time travelling like the character in the film, dreaming about what the next place might hold for them, but when they arrive they quickly become disillusioned, that is the plot summary. I just got bored watching the main character seduce another woman that was not Maggie Cheung!  Watch out for Spank selling those dodgy tickets!