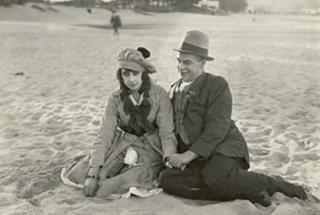 You know what it used to be like? I'll tell you what it used to be like. It used to be that once a year, the BFI would scrounge money out of Thames TV, and give it to Carl Davis to compose a new score for a classic silent film. And then they'd scrounge some more money to allow their restoration team to make the film look as good as humanly possible. And then they'd scrounge just a bit more to pay for a full sized orchestra to play Carl Davis' music to accompany a screening of the newly restored film. The Thames Silents were a regular highlight of the LFF in the eighties and early nineties: even before my first festival proper in 1989, I'd been to a glorious screening of Safety Last a year or two before.

And this was all fine and dandy until the money ran out, which roughly coincided with the time when Thames stopped being London's main television station. We don't get silent films presented to that standard any more, which is a crying shame. Usually the festival tries to compensate these days with the odd silent accompanied by a pianist, generally someone like the splendid Neil Brand who accompanied Metropolis here a few years ago.

Once in a while, though, you get something as splendid as The Sentimental Bloke. As always seems to be the way with films in the Festival's archive section, the story behind the film is as interesting as that of the film itself. The Sentimental Bloke was made by Raymond Longford in 1919, and is now the oldest surviving Australian silent feature. Based on a hugely popular narrative poem of the time, C.J. Dennis' The Songs Of A Sentimental Bloke, it's unusual for its fidelity to the source, its intertitles keeping the original unusual combination of Australian dialect and iambic pentameter. The restored version has been assembled from two separate sources - a slightly battered Australian release copy, and an American version which was spiffily preserved, but had several scenes removed and all the titles deslanged for an international audience. With liberal use of scene-by-scene tinting (as was the fashion of the time), you can rarely see the joins.

Bill (Arthur Tauchert), the Bloke of the title, isn't so much sentimental as prone to violent mood swings. When we first meet him, he's out boozing and gambling with his dodgy mate Ginger Mick, on a night out which ends up with him doing six months in jail. On release, he swears to become a reformed character, laying off the drink and taking on a proper job. And that's when he meets Doreen (Lottie Lyell), his 'ideal tart'. But has Bill really reformed, or will his larrikin past catch up with him?

Tauchert was a music-hall comic, and it shows in his performance - he hams up all the extremes of joy and grief that life (and a typical early silent movie plot) can throw at him. By comparison, Lottie Lyell is irritatingly blank throughout, and it's not too much of a surprise to discover that she's one of the film's producers giving herself a leading role she can't handle. But the ups and downs of the story are generally well handled, and given life in this performance thanks to a jolly folksy score performed live by Jen Anderson and The Larrikins.

Curiously for a silent film, it's the language that really stands out. In his introduction, archivist Paolo Cherchi Usai revealed that at a recent festival screening, simultaneous translation had to be provided in English: but for London, it was felt that the Australian dialect was close enough to Cockney for us not to need it. He's right, too: things like 'blimey' and 'moniker' don't need any translation here, and there are only one or two occasions where an old word has picked up unexpected baggage in the intervening 85 years. (The frequent use of 'tart' as an affectionate term for 'female' is slightly alarming, but not as much as the poetic passage describing a sunrise as it banishes 'the nigger, Night'.) A modern audience may start off laughing at the intertitles, but by halfway through we're laughing with them, particularly at a terrific description of Bill and Doreen seeing Romeo And Juliet on a date. There's a genuine poetry and wit running all the way through, and you can see why it went down so well with a wartime audience. (If you're curious, you can read the entire text of The Songs Of A Sentimental Bloke courtesy of Project Gutenberg.)

Stuart Pearce Fanclub - Imagine if you can a parallel universe (France), where an ageing Debbie Harry lookalike (I mean circa 2005 lookalike) called Lauren (Emmanuelle Signier), provides the big beat that todays hip hop pop kids really go for. Now into the mix toss a teenage fan (Isild Le Bresco) whose mother thinks it perfectly acceptable to invite her singing idol to perform a surprise number for her in the back garden, with film crew on hand to film the magic moment when fan meets idol (okay, i'm sure worse crimes were committed in the days of Jim'll Fix It). Now personally, I think parents should discourage their teenage daughters from lusting after (near) fifty something lesbian rock stars. Yet in this universe, when Le Besco becomes emotionally overwhelmed by this unexpected moment, all mother can say is "you blew it because you're all mouth".

Anyway, suffice to say Le Bresco goes haring after Lauren, eventually worming her way through her PA and security entourage at the hotel, and promptly begins, well whatever it is groupies do with rock stars. Cameron Crowe, of course, covered this subject matter a million times better in Almost Famous (more of him later). Because this is French cinema at its anxious pretentious and utter pseudo intellectual worst. I mean, I know French pop/rock have never produced anyone of note since Plastic Bertrand, but surely todays kids wouldn't be camping outside the hotel of an Age Concern lounge warbler like Signier. As for Le Bresco, I was impressed with her in Roberto Succo, and only slightly less impressed with her performance in last year's LFF offering A Tout De Suite. However I have now seen the light, and am of the view that she is an actress possessing a limited range that runs from dozy to vacant, pretty vacant in fact (why can't someone write a song about that, those French kids would have something to get their teeth into then).

The Belated Birthday Girl - Icelandic direcor Dagur Kári's second movie, Dark Horse, is an episodic tale centred on a young Danish man, Daniel, who has no job (the film opens with a vary amusing interview at a tax office discussing his lack of income) and makes what little money he has as a graffiti artist for hire. Over the course of the first few chapters we meet other quirky characters - Daniel's wanna-be referee best friend, known as "Grandpa", and his colleague at a sleep-research centre, the young woman at the local bakery and her flirtatious mother - in a series of seemingly loosely connected, humourous vignettes. But over the course of the film a more definite through line develops, with discernable plot and character arcs, and the tone becomes more serious. Also notable are the look and sound design: shot in black and white, with (as explained in the Q&A afterwards) a mono soundtrack, apart from the music (which was at least in part performed by the director's own group).

The "Dark Horse" of the English title could perhaps be seen as referring to the main character, Daniel, or perhaps to the film itself: the director said he wanted it to start out like a sitcom (the original inspiration was in part the screenwriter performing some Seinfeld sketches over beers in a bar in Paris), moving into something more serious, in a Kieslowski vein. Although the film definitely had its moments, particularly in the earlier, more humourous scenes, and included some fine performances, particularly from Jacob Cedergren as Daniel, for me it was not entirely successful. The story felt too loosely put together, and it often felt too deliberately quirky, although the Q&A after the film explained how the film came out from a series of ideas and plot came along later, and that made much more sense of this. I suspect others with a higher tolerance than I have for loose narrative episodic structure will get more out of this, but it made an interesting enough start to the festival for me.

Stuart Pearce Fanclub - Well get this, not only did one have an introduction beforehand and a Q&A afterwards featuring Cameron Crowe, Kirsten Dunst and Susan Sarandon, but one was also given a free copy (that's right a free copy) of The Times on the way out. What more could one ask for; a decent movie perhaps (okay I am a greedy bastard, I just can't help it).

Anyway the basic premise is Orlando Bloom designs the (Nick Leeson) turkey of all running shoes, and finding himself on the verge of taking the honourable way out, suddenly receives a phone call to say his dad has died, and he is needed to organise the funeral. On the plane to Elizabethtown he meets air hostess Dunst and so romance ensues.

I have to say I don't think I have ever seen a film try so hard to be funny, quirky and feelgood. Well you know the problem that comes with trying too hard, because as a movie it fails on every count. The problem for this I would put almost squarely at the (pretty) feet of Dunst. Her character is like the perfect male fantasy woman. Namely blonde, throwing herself at you, and always willing to give you another chance; oh yea and funny, quirky, and feelgood (interpret that last word anyway you want) as well. Personally I felt nauseous, not because of her excessive sweetness, but more a case of feeling sick that women aren't like that in real life (or if they are where can I meet one). Or to put it another way 'too f****** good to be true'.

Thus without Dunst's character this movie had potential, but instead it is a lazy comedy that tries too hard to pander to the audience, using a formula that is probably nicked from last year's Sideways. The whole project noticeably lifts when Susan Sarandon (as the deceased's widow) is on screen, but shame on you Cameron Crowe, she is barely on screen at all.

A first date movie, and no more than that.