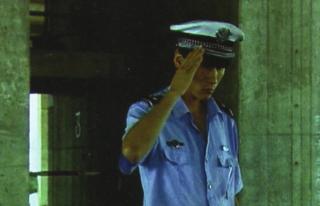 A quick update to Monday's diary. Literally a couple of hours after I publically whinged about the LFF not publishing a souvenir catalogue, I walked into the NFT and found piles of the damn things on display. (Mind you, I seem to have been the first person to buy one, if the reaction of the people on the reception desk is anything to go by.) The catalogue is a more detailed affair than the free programme booklet, devoting half a page to every film, and including detailed cast and crew info. I must say that it's not as detailed as it used to be, though, particularly with more obscure foreign films where the information might well be useful. For example, the listing for Uniform only lists four cast members - Liang Hung-Li, Zhen Shuo-Qiong, Han Kai and Qin Hua - but doesn't tell you which characters they play. Which is why you're not getting that information in the next paragraph.

Wang Xiaojian is another one of those aimless young males that Asian cinema is full of nowadays. Takeovers at the local factories mean that jobs are in short supply, and with a sick father to look after, he has no option but to help out in the family laundry. A policeman has left a shirt for cleaning and promptly got himself into an accident, and Wang decides to wear the shirt himself for his own nefarious purposes. Initially he uses it to give him the confidence to pick up women, and soon he's sparked up a relationship with a girl in a CD shop. But inevitably, there are other more dangerous opportunities available for someone impersonating a policeman.

Loads of films are shot on video these days, and one thing that's always annoyed me about the process is the smudgy look you get when transferring from video to celluloid. I've often wondered that as digital projection is becoming more and more widespread, why people don't just project direct from video. Uniform shows exactly why that's done so rarely - the hard-edged, low-lit feel of directly projected video makes it look like a low-budget television play, despite a couple of bits of complex camerawork. (A long tracking shot following a mirror being carried into Wang's father's house is particularly well choreographed.) Diao Yinan's film doesn't suffer too much from this, though. Interestingly - at least to a Western audience - although the police impersonation plot has all the dramatic and comic possibilities you'd expect, Uniform possibly works best as a snapshot of contemporary Chinese society. A large part of the film is spent on the fluctuations of the labour market, the way people can be scapegoated for being in the wrong place at the wrong time, and the acceptance that "how much have you got?" is an acceptable amount for a police on-the-spot fine: they're probably the bits that make this film most interesting. 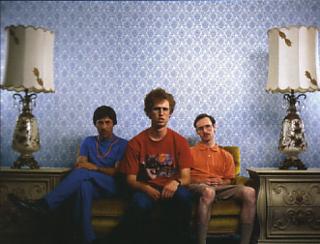 Napoleon (John Heder) is a geeky Idaho teenager, and the film that bears his name tells the story of his disturbing family and friends. His elder brother Kip (Aaron Ruell), who spends virtually all his time in an internet chatroom with a mysterious girlfriend. His uncle Rico (John Gries), looking after the two brothers following their grandma's biking accident, and hoping to make a quick buck while he's there. His best friend Pedro (Efren Ramirez), who Napoleon turns to for advice on picking up girls. And Deb (Tina Majorino), the specific girl he's trying to get to go to the school dance with him.

Napoleon Dynamite is going to be one of those films people either love or hate - certainly as I was watching it, I could actually feel tangible Fuckoff Vibes streaming off The Belated Birthday Girl for its whole running time. As for me? I'm going to be awkward and be kind of ambivalent. At the centre is an undeniably superb performance from John Heder, who nails the confusion and frustration of male adolescence with almost surgical precision - there's a sort of ducking run he uses when escaping trouble, which is a perfect piece of observation. And there are some glorious individual gags scattered throughout the movie, not to mention an utterly charming title sequence - images by Pablo Ferro, music by The White Stripes - which automatically makes everyone feel well disposed towards the movie from the word go. (Well, maybe not everyone. See bottom of page.)

But twenty-odd years ago, Twentieth Century Fox released Revenge Of The Nerds: today they're releasing this film under their indie offshoot company, Fox Searchlight. There's actually no real difference between the two, except for director Jared Hess avoiding the usual genre gross-outs and keeping the whole thing at a PG rated level (a consequence of his being a Mormon, apparently). Because Napoleon premiered at Sundance, it's acquired some sort of cool credibility it doesn't really deserve: if this was a full-on studio teen comedy, it'd be no different from any of the others out there. It's quite fun as a sequence of gags and riffs on the theme of social ineptitude, but don't expect anything more than that. 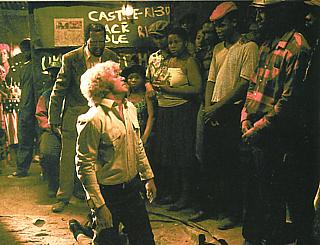 Sandra Hebron, LFF supremo, does the initial introduction to Napoleon Dynamite: but it's left to one of her assistants, Michael 'Low Fat Morrissey' Hayden, to chair the Q&A afterwards. This is because Sandra has run off to welcome the glamorous visitors from House Of Flying Daggers, possibly the hottest ticket at this year's festival (and one that, sadly, I don't have). Meanwhile, Low Fat Morrissey has been left behind to introduce Stander, and conduct a Q&A with a director previously best known for helming Harriet The Spy. It's always annoying when management take the best jobs for themselves, but as it turns out Stander is actually a really good place to be if you're not one of the corporate whores who've snaffled up all the Daggers tickets and taken them out of the hands of decent honest filmgoers and no I'm not bitter.

Andre Stander (Thomas Jane) is a cop in South Africa at the height of the apartheid regime. Having to police the 1976 Soweto riots just brings home to him how disillusioned he is with his job. As he says in a throwaway remark to a colleague, the police are spending so much time harrassing blacks, a white man could be out on the streets causing havoc and never get caught. Passing a bank in his lunch hour, he decides to test that theory. It's the first step in a criminal career that will take in a couple of dozen bank robberies - and Stander proves so good at covering his tracks, he even gets to investigate his own crimes. And this is only the beginning. And ridiculous as it may sound, this all really happened.

According to director Bronywn Hughes this is a fairly faithful account of the events of Stander's life, with just a few incidents telescoped together to make better dramatic sense. Her rule is, the more ludicrous the incident, the more likely it is it really happened that way - so yes, at one point Stander and his gang robbed a bank just because it was located next door to the incident room that was investigating them. In the way that a criminal turns into a popular folk hero rebelling against society, this has a lot of similarities to the Australian film Chopper of a few years ago: and in the same way that film was driven by a ferociously charismatic central performance by Eric Bana, this one simply wouldn't work without Thomas Jane's excellent work in the leading role. Even though the part requires him to change his appearance every few minutes in a sequence of increasingly cheesy disguises, his sense of justice and passion for a good prank is a constant factor throughout.

And the rest of the film supports that performance beautifully, including a funky score from David Holmes' band The Free Association and some excellently gritty camerawork from Jess Hall. Hughes handles the action scenes with tremendous wit and verve, but also gives the Soweto riot scene the serious impact it deserves - it's an early high point of the film, and one that apparently freaked out the South African audience at its premiere, as it was a little too close to recent history. As far as simple flat-out entertainment goes, this may be the highlight of my festival so far. Still another week to go, though.

The Belated Birthday Girl - Well, I hated this pretty much from start to finish.  It's the sort of wilfully quirky film, with every character overdrawn, every scene overstuffed, that I find intensely annoying.  In the LFF catalogue, the director claims he "did not set out specifically to write a cult movie", but that's how it feels to me - something written in order to get on that list for future years, trying to sit alongside vastly superior films such as Rushmore.  We're supposed to find the gawk and geek of the characters endearing, or even lovable, but to me they felt too wackiness-by-rote, and irritated me more than any other reaction.  I don't think I actually laughed once, although there was one scene involving Pedro's cousins which, had it come earlier in the film, might have raised a giggle, but by the time it came, the film had long ago lost any good will I might have had towards it.  I am often saying how I think comedy is perhaps more a matter of personal taste than other genres, and maybe it's just that this didn't tickle my funny-bone (certainly there were plenty of other people in the audience laughing).  But I get the feeling with this sort of film of a blueprint of wackiness, and I'm not buying into it.  Also, there just wasn't anything in the film to care about, if you didn't fall for that "Aww, aren't they cute nerdies!".  No doubt some people will rave about it, and it will get on some people's cult film list in years to come, but it really doesn't deserve it.