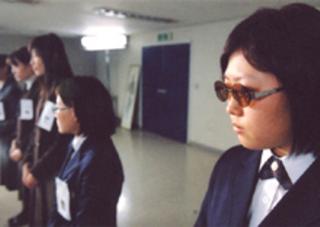 And so it's back to the exploding Koreans again. Well, sort of. This is a curious portmanteau piece produced by the National Human Rights Commission of Korea, consisting of six short films with no real link other than a vague PC agenda. It's of particular interest given South Korea's current increased profile in British cinemas, because three of the six directors involved are already known here through previous releases.

This could only ever be a mixed bag, but the split works out roughly at three okayish sections and three very good ones. Taking the lesser films first: Park Kwang-Su's Face Value was apparently commissioned before the theme of the anthology was decided, and it shows. It's hard to fit a human rights theme to this short tale of an argument between a drunk driver and a female car park attendant (other than the risks of judging on appearances), but it's an interestingly creepy short in its own right. Jeong Jae-Eun (whose Take Care Of My Cat was released here recently) provides another atmospheric piece, The Man With A Past. It's a beautifully designed story about an incredibly sterile, controlled apartment block, and the hell a young boy goes through when he wets the bed there, but its final meaning seems a little too oblique for Western audiences (or at least for me). And Park Jin-Pyo's Tongue Tied is just bloody horrible - excruciating, long-take, close-up footage of a little boy's oral surgery - but saves its real kicker for the final captions, when it reveals why his parents put him through this ordeal in the first place.

As for the better pieces: Im Soon-Rye's slightly disappointing film Waikiki Brothers played in the 2001 LFF, but her opening piece here, The 'Weight' Of Her, is much better. A very funny satire on Korea's attitudes to women's body image, it follows a slightly tubby schoolgirl with non-Western looking eyelids, as she struggles to get by in a school full of girls completely obsessed with their appearance. She gets the last laugh in a wholly unexpected way. Yeo Gyun-Dong's Crossing is a delightful series of short blackout sketches featuring cerebral palsy actor Kim Moon-Joo, struggling to make his own way through life and finding the helpfulness of others a constant hindrance.

But the best is saved for last, with NEPAL (Never-Ending Peace And Love). Park Chan-Wook - his Sympathy For Mr Vengeance recently appeared in the Tartan Asia Extreme Festival - tells the true story of a Nepalese woman who was fast-tracked through the Korean mental health system by accident, spending six unnecessary years in assorted institutions. His approach is to treat it as sick Kafkaesque farce, playing the misunderstandings for laughs as a series of officials insist that the Nepalese language and Korean nutterspeak sound almost identical, honestly. (In the same way that ICA projectionists could be mistaken for mental patients in the UK, given the way one of them showed at least five minutes of this film half racked off the screen without noticing.) Projection problems aside, a fascinating look at another side of Korean cinema. 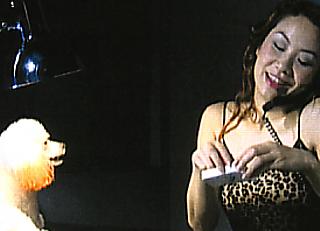 In the opening of Andrew Yu Su Cheng's film, a narrator describes how dramatically Shanghai has changed in the last ten years. Which made my ears prick up, because ten years ago I visited Shanghai myself. It was part of a tour of China that went via a well-worn tourist route, starting in Hong Kong, finishing in Beijing and taking in four or five rural areas on the way. But in the middle of the tour we spent a couple of days in Shanghai, and the contrast with the rest of the country was immense. China as a whole was already rebuilding and taking on Western ideas, but Shanghai was going for it at a hugely accelerated rate, showing signs of approaching Hong Kong as a trading force to be reckoned with. That expansion has continued in the subsequent ten years, it would seem: according to one statistic in the film, there are now more German expats living in Shanghai than there are in Hong Kong.

Welcome To Destination Shanghai opens with this glamorous, high-speed vision of the city, illustrating it with a commercial-style montage of Shanghai shots tarted up with every video effect in the box. And then it settles down to look at the grubbier reality, concentrating on a number of people getting by in the new Shanghai. The characters centre round Jennifer (Jin Yin), a middle-aged woman working in the "meat and skin trade", as she puts it. We meet some of her employees, and some of the people who use her services, gradually picking up an overall view of the split in Shanghai today. On one hand, there are the middle-aged Children Of The (Cultural) Revolution, still not able to come to terms with the huge changes they've seen in their lifetimes: on the other, there are the disillusioned teenage boys who seem to be a regular fixture of Asian life these days, or at least Asian cinema.

This is a flawed experiment, but undoubtedly an interesting one, wobbling precariously on the border between narrative cinema and video art. In contrast with the frantic energy of the Shanghai exteriors, the interior scenes are conducted on sets so minimal they're barely there at all. (One audience member was pressing Cheng for an explanation of the symbolism behind the set design: but any fan of low-budget cinema will recognise it as simply being symbolic of not having any money.) The look of the film is hard-edged, harshly-lit video, though apparently that's a useful dodge to get around the Chinese film censors, who don't consider video to be film and so leave this sort of thing alone. There are some huge silences and narrative longeurs that will no doubt annoy some viewers. But underneath all the arty trimmings is a fascinating portrait of a city going through some rapid changes. And I liked the closing scenes a lot, when three of the characters take a trip to a rural town 80 miles away from Shanghai, and show how the city's influence even extends out to there. 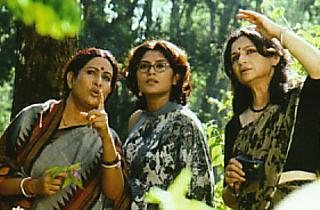 Despite the best efforts of the British Film Institute, they just can't seem to get young people interested in the films of Indian master Satyajit Ray. A splendid retrospective of his work was held last year at the National Film Theatre, but the vast majority of the audience inevitably consisted of old people who remembered his films from their original release decades ago. And the same applies to this screening of a new sequel to one of his sixties works - to all intents and purposes, it's Days And Nights In The Forest 2: Electric Boogaloo. An indication of the average age of the audience came during the pre-film announcement that owing to a screw-up with the print, we'd have to watch a VHS copy instead. In the ensuing hubbub, the clearest voice I could hear was asking, "what's VHS?"

Writer/director/photographer/composer Gautam Ghose has revisited Ray's 1969 classic, which followed four young men on a few days' holiday in the forests of northern Bengal. Over thirty years later, we get to meet three of those four men, played by the original actors (sadly Shekhar, the one everyone liked best, is no longer with us). They decide to make a return journey to the forest, this time bringing their numerous family members with them. Inevitably, the youngsters end up repeating the mistakes that the earlier generation made.

Obviously I wasn't seeing this film in ideal conditions - fuzzy VHS with the words 'preview copy' flashing up on screen every five minutes. But even looking past the projection limitations this is a very flat-looking film, feeling more like a TV movie than anything else. And the frequent ham-fisted insertions of footage from Days And Nights In The Forest just emphasise that the new film simply doesn't have the visual or verbal poetry of Ray's work: it's a more conventional Indian film, even down to the curious inclusion of a couple of half-hearted musical numbers. The early sections of In The Forest... Again are enjoyable enough, as there are obvious pleasures to be drawn from meeting these characters again. But the attempts to drag in modern elements - cellphones, post-9/11 trauma - are clumsily done, and the subtle character work of the first half descends into unnecessary melodrama in the second. Fans of Ray may find this a curiosity, or they may prefer to keep their memories of the original intact.

Anna - I liked this very much! It narrates a piece of recent italian history (set in 1978), referring to the many kidnappings in the 70s (apparently 600 of them, many were kids, like in this film).  So it brings back memories of when kidnappings featured daily in the news bulletins (even the newsreader, Emilio Fede, was the same then and is still there and very popular, even if he since changed TV company).  But this isn't all about nostalgia as I found the story powerful: it shows the different aspects of that reality, the hope and resignation of a rural community, alternating good and bad, freedom and pain, lived through the eyes of the children. The setting is also about contrasts: the film is set in Southern Italy, but the bright countryside, the open scenery alternate with the dark indoors of the small places, old farmhouses, of the poor lifestyle of the rural community.

The audience was mixed both in age and nationality but all seemed to appreciate it, including Adrian Wootton, who I thought looked especially pleased in the 20 min or so Q and A with a chatty Gabriele Salvatores (would have gone on more if there hadn't been another film soon after). The films I saw up to now weren't special - The Return of Cagliostro (disappointing), Burning Dreams (I liked), Kitchen Stories (OKish) - but I would see this one again.