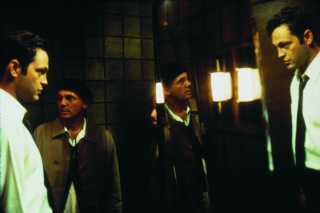 As far as worthwhile and respectable careers go, I've always considered 'telemarketer' to be somewhere in the moral hierarchy just below 'oil rig bitch'. (Acknowledgements to Charlie Brooker of TV Go Home for the most disgusting part of the previous sentence.) If nothing else, The Prime Gig gives you a little insight into the methods of the people who cold call you at home trying to sell you stuff. As I've always suspected, these people work with a complex flowchart of possible responses to your questions, so they can steer the conversation round to closure. So the trick is to come up with a response that can't possibly appear in their calculations, like the one from a few years ago I'm rather proud of:

TELEMARKETER: Mr Monkey, would you like to earn a completely tax-free income?

Pendleton Wise (Vince Vaughn) - known to his friends as 'Penny'! Stop! My sides! - is a legend in the office where he works, regularly making more sales than virtually all his other colleagues put together. This isn't as much down to his ability as it is to the incompetence of everyone else he works with. With the office on the verge of closing down, he's headhunted by the mysterious Caitlin Carlson (Julia Ormond), who offers Penny the chance to join her team. The new job - the prime gig Penny has been waiting for most of his life - involves calling people to raise money for Kelly Grant (Ed Harris) and his somewhat nebulous gold mining project. Suddenly Penny realises he's a very small fish in a very big pond. Full of sharks.

As most people have said when discussing this movie, The Boiler Room pretty much covered all this territory earlier this year, and The Prime Gig is a bit too dull to add anything new. The opening's quite promising, as Penny's old office is staffed by a ludicrously rich collection of well-loved character actors, such as Wallace Shawn, Stephen Toblowsky and George Wendt. But within half an hour Penny's run off to his new job, and we never see them again. Vaughan is okay, nothing special: Ormond does her first scene in an American accent, her second in an English one ("Why are you sounding like Monty Python?") and flails embarrassingly across both sides of the Atlantic for the rest of the movie. Even the ultra-reliable Ed Harris is lost with material as mediocre as this. And that takes some doing. 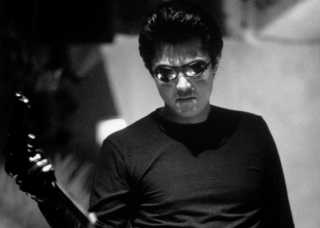 Japanese director Takashi Miike is big news on the festival circuit right now. It's taken a while: Dead Or Alive is his seventh film as director, but the first one to get international acclaim. It's based on a fairly standard genre script by Ichiro Ryu. Ryuichi Honjo (Riki Takeuchi) is a Chinese gangster who's gleefully running around the Shinjuku district playing off the Japanese Yakuza, the Chinese Triads and the police against each other. Takeru Jojima (Show Aikawa) is the cop determined to stop him. Add Ryuichi's brother to the mix - a student back from America who will obviously try to redeem his brother and become corrupted himself in the process - and it all sounds like your usual Yakuza romp.

Miike's approach, for the most part, is to treat this material with a slightly quirky eye. The escalating war between the two principals goes pretty much as planned (Show Aikawa having a smidgeon of the slopey-shouldered cool of Takeshi Kitano, but not much more). The difference is in the details: the assorted gruesome extras Miike throws in to emphasise that these are bad people. A woman is drowned in a paddling pool full of her own shit. A retreating policeman accidentally deep-fries his own hand, seconds after accidentally covering it in a tasty breadcrumb coating. And a police informer delivers important plot points while fluffing a dog in preparation for an animal porn photo shoot. They're nothing more than gratuitous shock moments, but they do their job of keeping things moving along.

Miike shows us what all the fuss is really about in the first and last sequences of the film. The opening is one of the most demented montages I've ever seen: Ryuichi's initial attack on the Japanese criminal fraternity is cut into a five-minute blur of shooting, stabbing, snorting, and sodomy that makes no logical sense whatsoever but is ludicrously exciting to watch. And it all ends in a shootout that rivals John Woo's A Better Tomorrow 2 for gory excess, only to follow it with a final confrontation between Ryuichi and Jojima that totally destroys any pretensions to realism this film may have. Whenever you're convinced that Miike has shown you the most preposterous thing you've ever seen in a movie, he tops it within about a minute: and he does that three or four times in the climax. There are just enough flashes of loony genius in here to make me curious to see Miike's other films, but I was hoping for a little bit more than that. 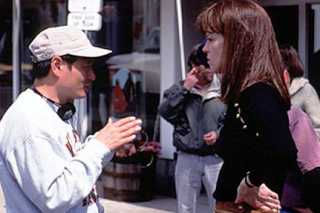 Ang Lee again! It's almost impossible to get away from the guy. Still, the huge queues outside the Odeon this afternoon waiting for returns for the matinee screening of Crouching Tiger, Hidden Dragon are testament to the director's popularity. (They've just announced a third screening at 6pm on Thursday 16th if you're desperate to catch this before the official release in January: run to the LFF box office now.) Lee is always careful to emphasise the importance of producer/scriptwriter James Schamus to his films, so it was only fair that Neil Norman's onstage interview was with them both. They're a nicely contrasting team: Lee's quiet and polite, whereas Schamus is a little more brash and waspish. When accused by an audience member of including a long desert flashback at the centre of Crouching Tiger which wasn't relevant to the main plot, it was Schamus who came up with the killer response: "It was a big mistake. We're sorry."

Crouching Tiger was obviously the subject of a large part of the interview. Lee wasn't interested in making a straight genre movie: there are all sorts of textures in Chinese literature and film that you don't get anywhere else, and he wanted to be sure that he could include those textures in his film. To this end he considers his three English language films - Sense And Sensibility, The Ice Storm and Ride With The Devil - to have been an important part of the preparation for this one: he didn't feel ready to take it on till now. He also talked a little about the strong female roles at the centre of this and other films, and how he finds strong female characters interesting both for themselves and the light they cast on a male-dominated society. (Although at last night's screening he came up with a somewhat more candid explanation: "it's fun watching girls fight.")

Schamus' take on Crouching Tiger made for an interesting contrast, as he described the scriptwriting process. He worked from an English language synopsis of the source novel, producing a first draft that he described as "a nightmare parody of Chinese culture... imagine a Chinese scriptwriter writing a Western in which a cowboy walks into a bar, says 'howdy' and then kowtows nine times - it was a little like that." Schamus then worked closely with two Chinese screenwriters to put the cultural references back on track, while keeping to his original dramatic structure. The result manages to be a western movie for eastern audiences and an eastern movie for western audiences: the collision of the two cultures has produced something wholly unique. Schamus hinted that a sequel or prequel may be on the cards, but not for some time yet: "don't worry though, there'll be twenty or so Hong Kong films released next year with Crouching Tiger in the title..."

The interview also covered the history of the Lee/Schamus partnership (going as far back as his first film, Pushing Hands), Lee's continuous hopping between different styles of filming ("it's good to test your craft against the traditions of a genre") and the current surge of interest in Asian film generally. Lee gave an explanation of the attraction of Asian cinema which ties in nicely with the other two films I saw today: "When you see the beginning of an American film, you know exactly how it's going to end. When you see the end of an Asian film, you're sometimes not sure what happened in it at all..." Overall, an enjoyable and informative hour and a half, despite the disappointment of Chow Yun-Fat's non-appearance. Watch out for a full transcript of the interview (and maybe a few audio clips) courtesy of Midge and the crew at Film Unlimited within the next day or two.

Ken - For someone who usually doesn't like movies where you have to read the subtitles I really enjoyed this Russian gangster movie. It has lots of action (including a heavy machine gun - although budget restraints mean that the camera concentrates on the gun being fired rather than on the supposed destruction) and moments of comedy too. As the story line includes travelling to the U.S. a lot of the comedy comes from exploring the quirks of that society. Including those weird agricultural quarantine rules that they have at the airport (when asked if he has brought any meat, fruit or vegetables with him our Russian man replies "Why? Don't they sell them here?"). A policeman later attempts to arrest him for drinking on the street. The policeman won't arrest the other characters who are drinking because their bottles are in paper bags so he can't see them drinking. You know I'd always wondered why in American movies and TV programmes you see people drinking out of paper bags. Finally it takes a Russian movie to explain this to me - not that it makes any sense even now.