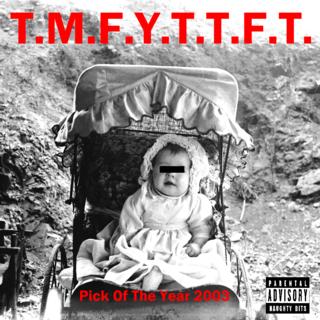 As I have nothing better to do, I find myself working through someone else's top 18 tunes of 2003 (well yours actually); how sad is that? Far be it for me to criticise other people's taste, but your main criteria for inclusion seems to be the song must only last 40 seconds! Anyway for those of you with longer attention spans, click here [dead link].

Incidentally my answer to the competition question is: 'Try Making Fucking Yourself The Therapeutic Future Thing'. (Blank CDRW will do nicely.)

This is, of course, a reference to Suze getting the booby prize in last year's competition. But there's one small catch: as of the closing date, nobody had managed to get the correct answer. And the rules state that in that event the first entry, however incorrect, will be deemed to have won. And Suze was the first of two people to enter this year. The other one was serial contest winner Uncle Tony, who made a similar stab at getting in with a known wrong answer eight days later ("I will guess the answer as Tatu on the basis that I believe their name to be an acronym so it would be in the spirit of the competition"). But Sheryl Crow Fanclub was first, so he wins this year's competition and his own copy of the CD. Outrageous, I know, but congratulations to him anyway.

And to be fair, his answer was twelve and a half per cent right. To work out what the title acronym meant, you would have had to have listened to the audio clip of Frenzal Rhomb's I Went Out With A Hippy And Now I Love Everyone Except For Her. The final seconds of the song, after the last chord, consist of a grumpy Australian bloke proclaiming: "The Government's wrong. Too much fuckin' youth, that's the fuckin' trouble." See how easy that was? Maybe you'll all be a bit more enthusiastic next year...